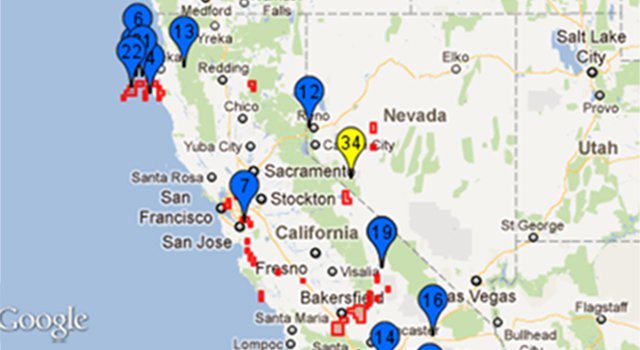 A "seismic hotspot" map produced using the NASA-funded, UC-Davis-led forecast method. The colored areas (hotspots) are determined by computing the increase in potential for large (greater than magnitude 5.0) earthquakes. Research has shown this procedure locates areas (hotspots) that are sensitive to earthquake events greater than magnitude 5.0 that will occur over approximately the next 10 years. Blue spots indicate earthquakes in the hotspot area, while yellow spots indicate earthquakes that occurred outside of the forecast area. Note that the forecast is static, based on Holliday et al, 2007, while earthquakes above magnitude 5.0 are added when they occur. The scorecard is about 90 percent successful.
Credit: UC Davis

A NASA-funded method for forecasting earthquakes in California has received high marks in a comparative study of seven earthquake forecasts.

While earthquakes can't yet be predicted, scientists are making advances in their ability to forecast where they are most likely to occur, with the best forecasts now about 10 times more accurate than a random prediction, according to a new study by scientists at the University of California, Davis.

The researchers compared seven earthquake forecasts submitted to a competition organized by the Southern California Earthquake Center in 2005. Among the competitors was a NASA-funded forecast developed by a UC Davis-led group under NASA's QuakeSim program. Results of the study will be used to help researchers develop better quake forecasts and improve the tools they use to assess them.

The teams were invited to forecast the probability of an earthquake of magnitude 4.95 or greater occurring during the period from Jan. 1, 2006 through Dec. 31, 2010 in California and bordering areas. The region included in the competition was divided into approximately 8,000 grid squares. During the competition timeframe, 31 earthquakes of magnitude 4.95 or greater struck this region in 22 different grid areas.

While all the forecasts showed some success in forecasting the locations of likely earthquakes, the NASA-funded UC Davis forecast team, which included Andrea Donnellan of NASA's Jet Propulsion Laboratory, Pasadena, Calif., was found to be the most accurate at picking the quake locations. It correctly labeled 17 of the 22 affected grids, and gave the highest probability of an earthquake in eight of these 17.