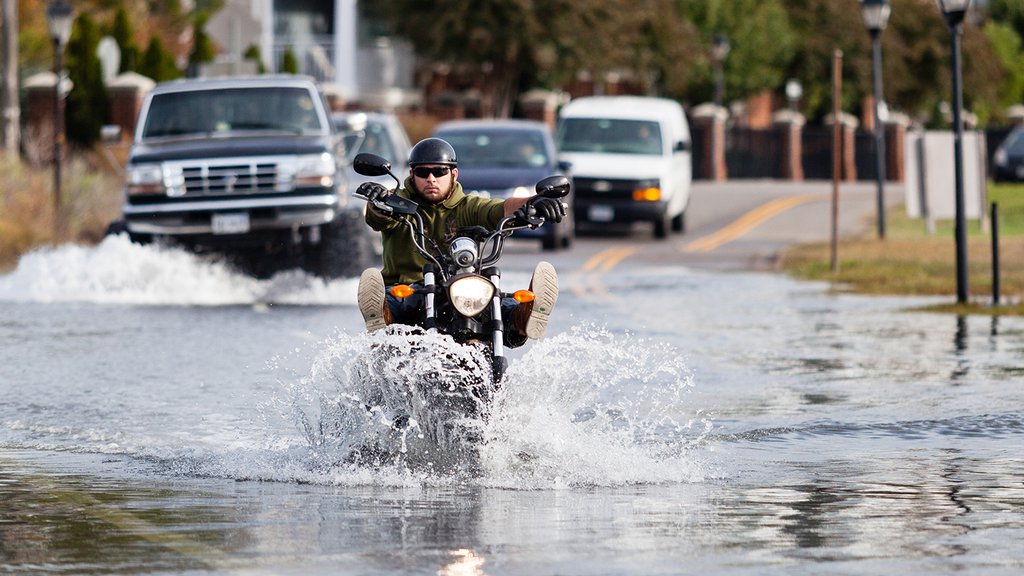 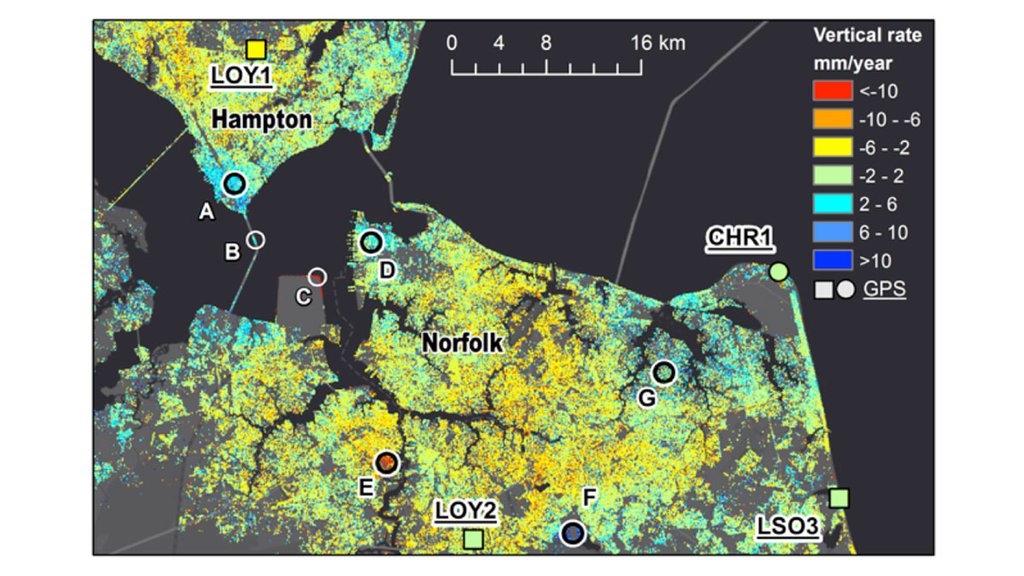 Part of the new map showing subsidence rates in millimeters per year. Locations A through G are areas of unusually high subsidence. CHR1, LOY1, LOY2 and LSO3 are GPS stations.
Credit: NASA/JPL-Caltech

The Hampton Roads metropolitan area is sinking at highly uneven rates, with a few spots subsiding 7 to 10 times faster than the area average.

A new NASA-led study shows that land in the Hampton Roads, Virginia, metropolitan area is sinking at highly uneven rates, with a few trouble spots subsiding 7 to 10 times faster than the area average. Whereas earlier estimates had suggested the area is subsiding evenly, the new study found that major differences in subsidence rates occur only a few miles apart.

Hampton Roads has one of the highest rates of relative sea level rise -- the combined effects of sinking land and rising seas -- along the U.S. East Coast, about an inch (23 millimeters) every five years. It has experienced a steady and dramatic increase in high-tide flooding over the last 90 years. Accurate, local subsidence maps are necessary for the area to prepare for increasing flood risks in the future. The region comprises seven Virginia cities, including Norfolk and Virginia Beach, as well as Naval Station Norfolk, the country's largest naval base.

The new study, published in the journal Scientific Reports, found that much-higher-than-average subsidence is occurring at Craney Island, a depository for material dredged from shipping channels, and at the Norfolk Naval Shipyard, where the subsidence was most likely related to local construction during the study period. In other areas with similarly high subsidence rates, the causes of the sinking are not known.

Researchers from NASA's Jet Propulsion Laboratory in Pasadena, California, and Old Dominion University (ODU) in Norfolk found the variations in subsidence by analyzing synthetic aperture radar (SAR) images acquired between 2007 and 2011 by the Japan Aerospace Exploration Agency's ALOS-1 satellite. Processing the data with state-of-the-art image processing techniques, the researchers were able to document how the land surface had changed from the time of the first ALOS-1 image to 2011. To tie in that relative data set with existing, lower-resolution maps of earlier subsidence, as well as to put the results into a framework already familiar to decision-makers, the researchers developed a new strategy to integrate the processed SAR measurements with Global Positioning System (GPS) observations.

The result was the first high-resolution estimates of vertical land motion in Hampton Roads. The new estimates have a spatial resolution of about 100 feet (30 meters), whereas earlier estimates were based on data from GPS stations located 10 to 15 miles apart (about 20 kilometers).

The production of the new maps was a pilot project between JPL and ODU to assess the feasibility of using space-borne SAR data to map subsidence in Hampton Roads, according to lead author David Bekaert of JPL. He noted that the techniques developed to make these maps integrating SAR and GPS measurements could be used to map subsidence at other locations.

The ALOS-1 data set used in this study is relatively small, with the satellite acquiring an image of the area only once every 46 days at best. Bekaert and coauthors look forward to using data from the future NASA-Indian Space Research Organizaton Synthetic Aperture Radar (NISAR) mission, scheduled to launch in 2021, and from the European Space Agency's Sentinel-1 constellation, which currently acquires a new image of the Hampton Roads area every 12 days. NISAR will also acquire an image every 12 days, but because of its longer operating wavelength and higher resolution, it is well placed to extend subsidence mapping into more challenging rural areas and wetlands.

"Continuing, regularly acquired SAR data will allow us to reduce the uncertainty in our subsidence rate estimates, which is important for decision-making," Bekaert said.

Coauthor Ben Hamlington (ODU) noted, "Information regarding subsidence should be incorporated into land use decisions and taken into consideration for future planning." He has presented preliminary findings from this study to several planning and emergency management committees in Hampton Roads.

Hamlington said, "We had a need for high-resolution images of subsidence, but we didn't have the expertise and technology to do the analysis ourselves here at ODU. Collaborating with JPL helped us build capacity for the future, and also get immediate results."

NASA's associate program manager for disasters, John Murray of NASA's Langley Research Center in Hampton, connected the ODU and JPL scientists. The study was funded by NASA's Earth Science Disasters Program and the Commonwealth Center for Recurrent Flooding Resiliency, jointly operated by ODU and the College of William & Mary, Norfolk.