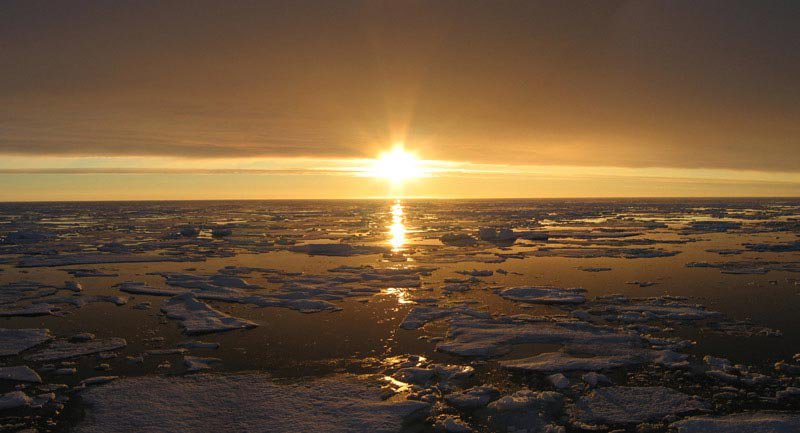 A new NASA-led study found a 23-percent loss in the extent of the Arctic's thick, year-round sea ice cover during the past two winters.

PASADENA, Calif. - A new NASA-led study found a 23-percent loss in the extent of the Arctic's thick, year-round sea ice cover during the past two winters. This drastic reduction of perennial winter sea ice is the primary cause of this summer's fastest-ever sea ice retreat on record and subsequent smallest-ever extent of total Arctic coverage.

Between winter 2005 and winter 2007, the perennial ice shrunk by an area the size of Texas and California combined. This severe loss continues a trend of rapid decreases in perennial ice extent in this decade. Study results will be published Oct. 4 in the journal Geophysical Research Letters.

The scientists observed less perennial ice cover in March 2007 than ever before, with the thick ice confined to the Arctic Ocean north of Canada. Consequently, the Arctic Ocean was dominated by thinner seasonal ice that melts faster. This ice is more easily compressed and responds more quickly to being pushed out of the Arctic by winds. Those thinner seasonal ice conditions facilitated the ice loss, leading to this year's record low amount of total Arctic sea ice.

Nghiem said the rapid decline in winter perennial ice the past two years was caused by unusual winds. "Unusual atmospheric conditions set up wind patterns that compressed the sea ice, loaded it into the Transpolar Drift Stream and then sped its flow out of the Arctic," he said. When that sea ice reached lower latitudes, it rapidly melted in the warmer waters.

"The winds causing this trend in ice reduction were set up by an unusual pattern of atmospheric pressure that began at the beginning of this century," Nghiem said.

The Arctic Ocean's shift from perennial to seasonal ice is preconditioning the sea ice cover there for more efficient melting and further ice reductions each summer. The shift to seasonal ice decreases the reflectivity of Earth's surface and allows more solar energy to be absorbed in the ice-ocean system.

The perennial sea ice pattern change was deduced by using the buoy computing model infused with 50 years of data from drifting buoys and measurement camps to track sea ice movement around the Arctic Ocean. From the 1970s through the 1990s, perennial ice declined by about 500,000 square kilometers (193,000 square miles) each decade. Since 2000, that amount of decline has nearly tripled.

Results from the buoy model were verified against the past eight years of QuikScat observations, which have much better resolution and coverage. The QuikScat data were verified with field experiments conducted aboard the U.S. Coast Guard icebreaker Healy, as well as by sea ice charts derived from multiple satellite data sources by analysts at the National Oceanic and Atmospheric Administration’s National Ice Center in Suitland, Md.

The new study differs significantly from other recent studies that only looked at the Arctic's total sea ice extent. "Our study applies QuikScat's unique capabilities to examine how the composition of Arctic sea ice is changing, which is crucial to understanding Arctic sea ice mass balance and overall Arctic climate stability," Ngheim said.

Pablo Clemente-Colón of the National Ice Center, Suitland, Md., said the rapid reduction of Arctic perennial sea ice requires an urgent reassessment of sea ice forecast model predictions and of potential impacts to local weather and climate, as well as shipping and other maritime operations in the region. "Improving ice forecast models will require new physical insights and understanding of complex Arctic processes and interactions."

Other organizations participating in the study include the University of Washington's Polar Science Center, Seattle; and the U.S. Army Cold Regions Research and Engineering Laboratory, Hanover, N.H.

JPL is managed for NASA by the California Institute of Technology in Pasadena.
+ Read more about QuikScat