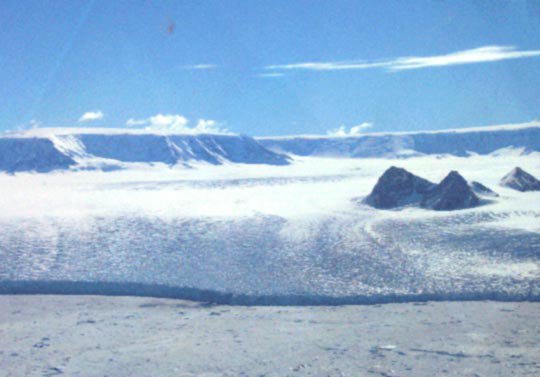 An international team of scientists from NASA and other research institutions embarked on a three-week expedition of discovery that will take them from the lush, dense rain forests of Central America to the frigid isolation of Antarctica.

An international team of scientists from NASA and other research institutions embarked on a three-week expedition of discovery that will take them from the lush, dense rain forests of Central America to the frigid isolation of Antarctica.

Armed with a unique radar instrument, the team will survey selected sites in Central America to help unearth archaeological secrets, and to preserve resources and biological and cultural diversity. Then the scientists are off to South America's Patagonia ice fields and Antarctica to conduct topographic surveys of ice to better gauge the effect of climate change.

Despite these harsh, exotic locales, this expedition won't encounter a single snake or spider, and parkas are definitely not required. That's because the team's savvy tour guide is an all-weather imaging tool, the Airborne Synthetic Aperture Radar, or Airsar, developed and managed by NASA's Jet Propulsion Laboratory, Pasadena, Calif. Carried aboard a NASA DC-8 laboratory, Airsar can penetrate clouds and also collect data at night. Its high-resolution sensors operate at multiple wavelengths, polarizations and in interferometric modes. This means they "see" beneath treetops, and through thin sand and dry snow pack. The sensors can produce topographic models.

Drs. Ron Blom, Eric Rignot and Sassan Saatchi of JPL, are leaders of the campaign's terrestrial science, cryospheric, and ecology and conservation science teams, respectively. They left NASA's Dryden Flight Research Center in California on the DC-8 bound for southern Mexico and Central America. Rignot will continue on to Chile to survey Patagonian ice fields, and the Antarctic Peninsula.

Much of the archaeological evidence needed to understand Pre- Columbian societies in Central America comes from identifying and documenting features remaining on the landscape. Difficult terrain and logistics have limited ground-data collection. Previous remote sensing techniques were unable to penetrate the forest canopy. Airsar is expected to detect features such as fortifications, causeways, walls and other evidence of advanced civilizations hidden beneath the forest. Images will shed insights into how modern humans interact with their landscape, how ancient peoples lived and what became of them. Airsar's archaeological applications were first demonstrated at Angkor, Cambodia, in 1996. It provided better detail than radar images obtained from a previous Space Shuttle flight.

In South America and Antarctica, Airsar will collect imagery and high- precision topography data to help determine the contribution of Southern Hemisphere glaciers to sea level rise due to climate change. In Patagonia, a recent study by NASA and others found the contribution more than doubled from 1995 to 2000 compared to the previous 25 years. Airsar will make it possible to determine whether that trend is continuing or accelerating.

Not much is known about the poorly mapped glaciers in the Antarctic Peninsula, an area 10 times larger than Patagonia. The area recently experienced rapid atmospheric warming, triggering a widespread retreat of floating ice shelves, reducing permanent snow cover and lengthening the melt season. Airsar will provide reliable information on ice shelf thickness to measure the contribution of the glaciers to sea level rise. It will also provide a precise topographic reference for comparison with satellite laser altimetry data from NASA's Icesat satellite and previous airborne data.

AirSar's 2004 campaign is a collaboration of many U.S. and Central American institutions and scientists, including NASA; the National Science Foundation; the Smithsonian Institute; National Geographic; Conservation International; the Organization of Tropical Studies; the Central American Commission for Environment and Development; and the Inter-American Development Bank.

For information about NASA and agency programs on the Internet, visit: http://www.nasa.gov.

For information about Airsar and NASA's DC-8 on the Internet, visit: http://airsar.jpl.nasa.gov and http://www.dfrc.nasa.gov/Research , respectively.