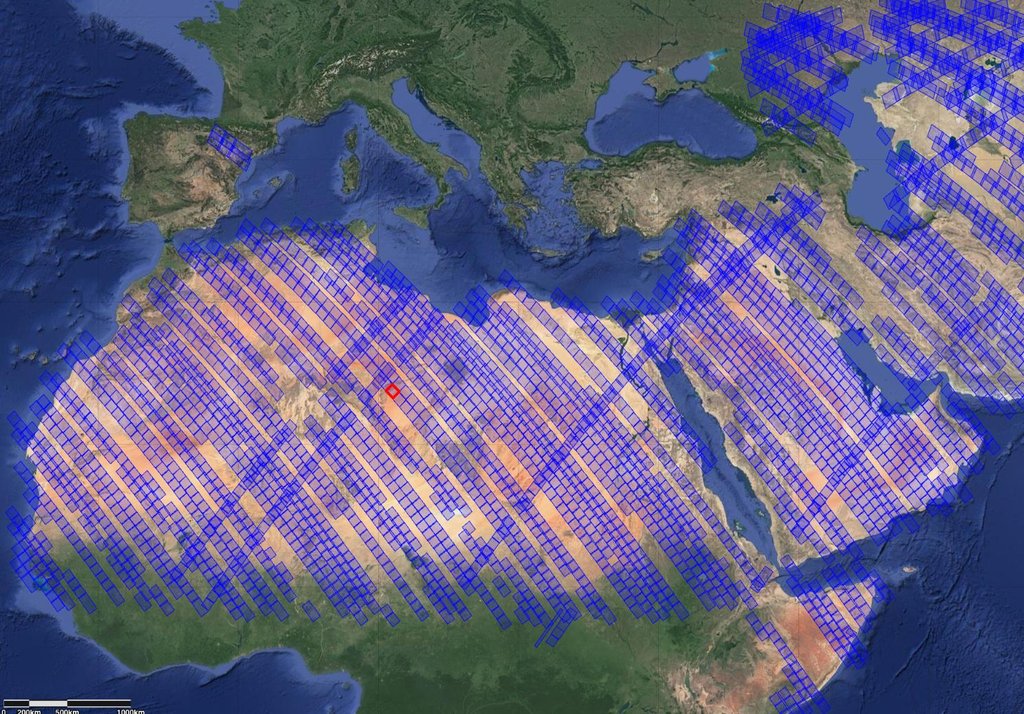 Installed on the space station in July 2022, EMIT orbits Earth about once every 90 minutes, to map the world's mineral-dust sources. This includes the Sahara, where it recently gathered data in an area of southwest Libya marked by the red box.
Credit: NASA/JPL-Caltech
Full Image Details

NASA’s Earth Surface Mineral Dust Source Investigation (EMIT) mission aboard the International Space Station has produced its first mineral maps, providing detailed images that show the composition of the surface in regions of northwest Nevada and Libya in the Sahara Desert.

Windy desert areas such as these are the sources of fine dust particles that, when lifted by wind into the atmosphere, can heat or cool the surrounding air. But scientists haven’t been able to assess whether mineral dust in the atmosphere has overall heating or cooling effects at local, regional, and global scales. EMIT’s measurements will help them to advance computer models and improve our understanding of dust’s impacts on climate.

EMIT scientists at NASA’s Jet Propulsion Laboratory in Southern California and the U.S. Geological Survey created the maps to test the accuracy of the instrument’s measurements, a crucial first step in preparing for full science operations.

Installed on the space station in July, EMIT is the first of a new class of high-fidelity imaging spectrometers that collect data from space and produce better-quality data at greater volumes than previous instruments. 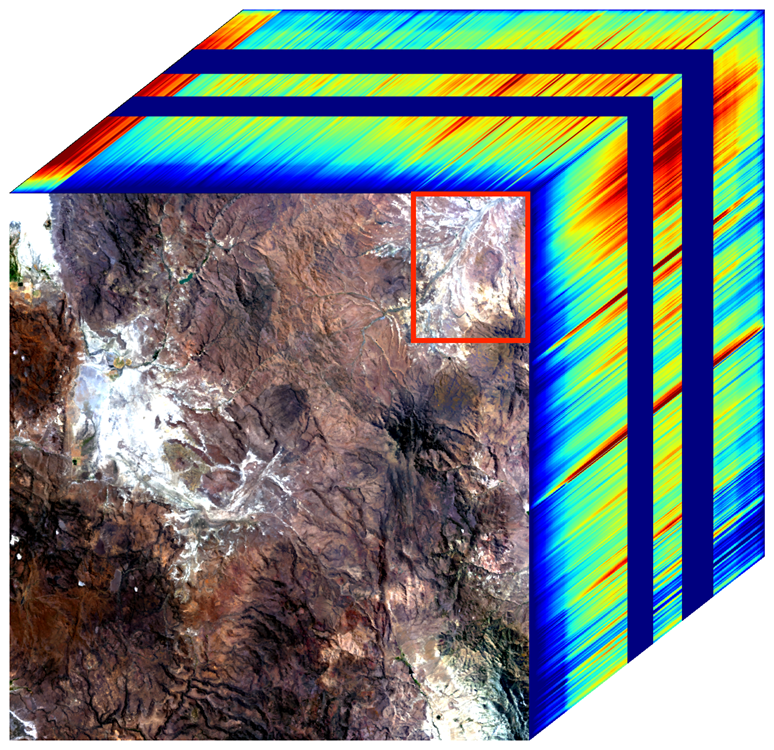 This image cube shows the true-color view of an area in northwest Nevada observed by NASA’s EMIT imaging spectrometer. The side panels depict the spectral fingerprint for each point in the image. The cube shows the presence of kaolinite, a light-colored clay mineral that reflects sunlight. 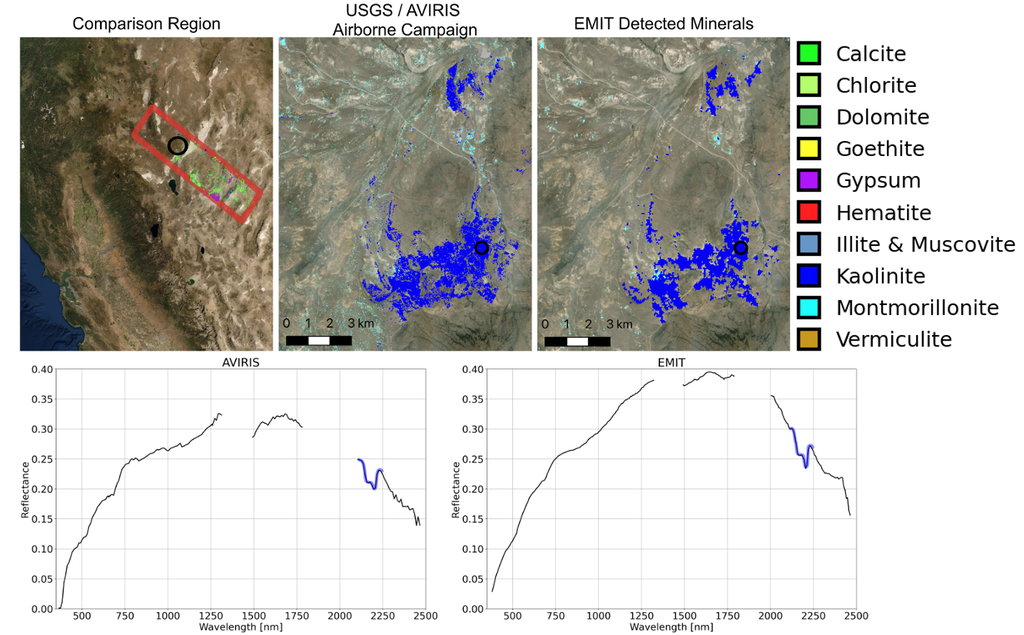 NASA’s EMIT mission recently gathered mineral spectra in northwest Nevada that match what the agency’s AVIRIS instrument found in 2018, helping to confirm EMIT’s accuracy. Both instruments found areas dominated by kaolinite, a reflective clay mineral whose particles can cool the air when airborne.

“Decades ago, when I was in graduate school, it took 10 minutes to collect a single spectrum from a geological sample in the laboratory. EMIT’s imaging spectrometer measures 300,000 spectra per second, with superior quality,” said Robert Green, EMIT’s principal investigator and senior research scientist at JPL.

“The data we’re getting from EMIT will give us more insight into the heating and cooling of Earth, and the role mineral dust plays in that cycle. It’s promising to see the amount of data we’re getting from the mission in such a short time,” said Kate Calvin, NASA’s chief scientist and senior climate advisor. “EMIT is one of seven Earth science instruments on the International Space Station giving us more information about how our planet is affected by climate change.”

EMIT analyzes light reflected from Earth, measuring it at hundreds of wavelengths, from the visible to the infrared range of the spectrum. Different materials reflect light in different wavelengths. Scientists use these patterns, called spectral fingerprints, to identify surface minerals and pinpoint their locations.

The Nevada map focuses on a mountainous area about 130 miles (209 kilometers) northeast of Lake Tahoe, revealing locations dominated by kaolinite, a light-colored mineral whose particles scatter light upward and cool the air as they move through the atmosphere. The map and spectral fingerprint closely match those collected from aircraft in 2018 by the Airborne Visible/Infrared Imaging Spectrometer (AVIRIS), data that was verified at the time by geologists. Researchers are using this and other comparisons to confirm the accuracy of EMIT’s measurements. 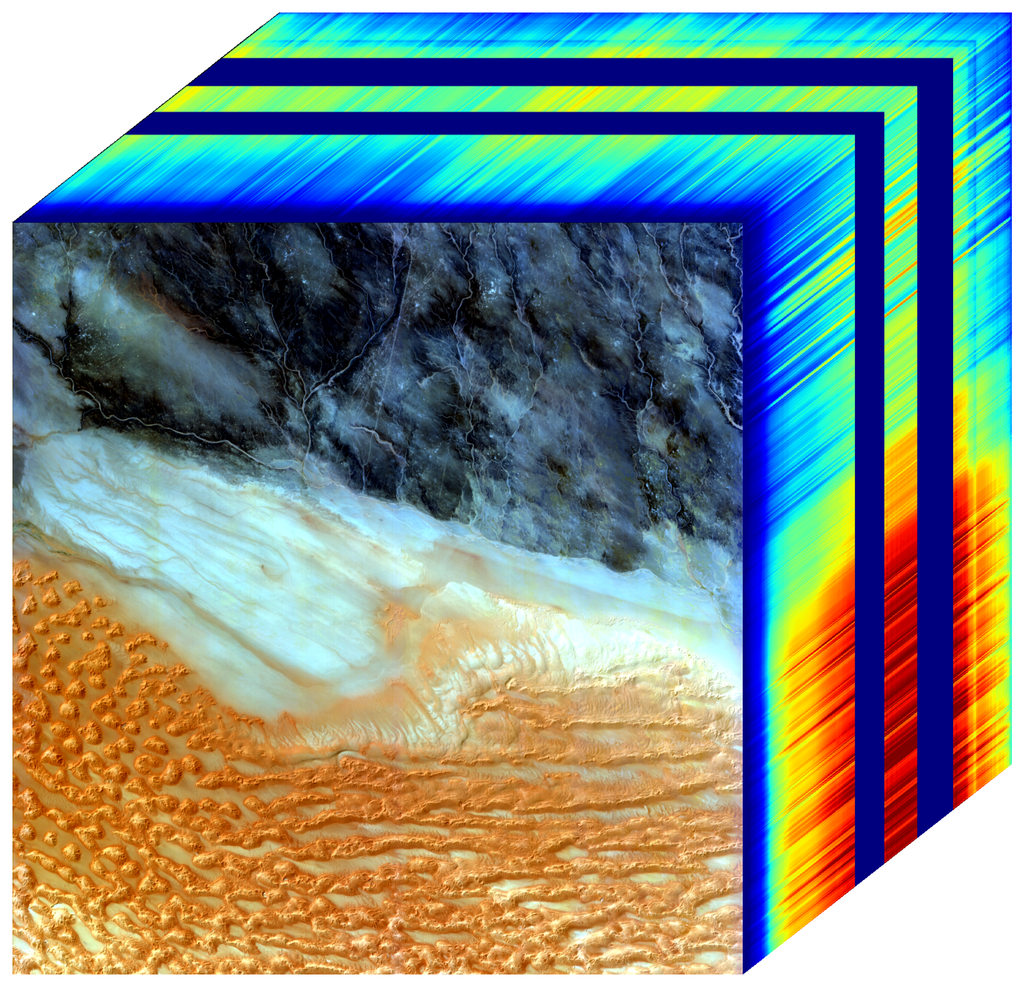 The image cube’s front panel is a true-color view of part of southwestern Libya observed by NASA’s EMIT mission. The side panels depict the spectral fingerprints for every point in the image, showing kaolinite, a reflective clay mineral, and goethite and hematite, iron oxides that absorb heat. 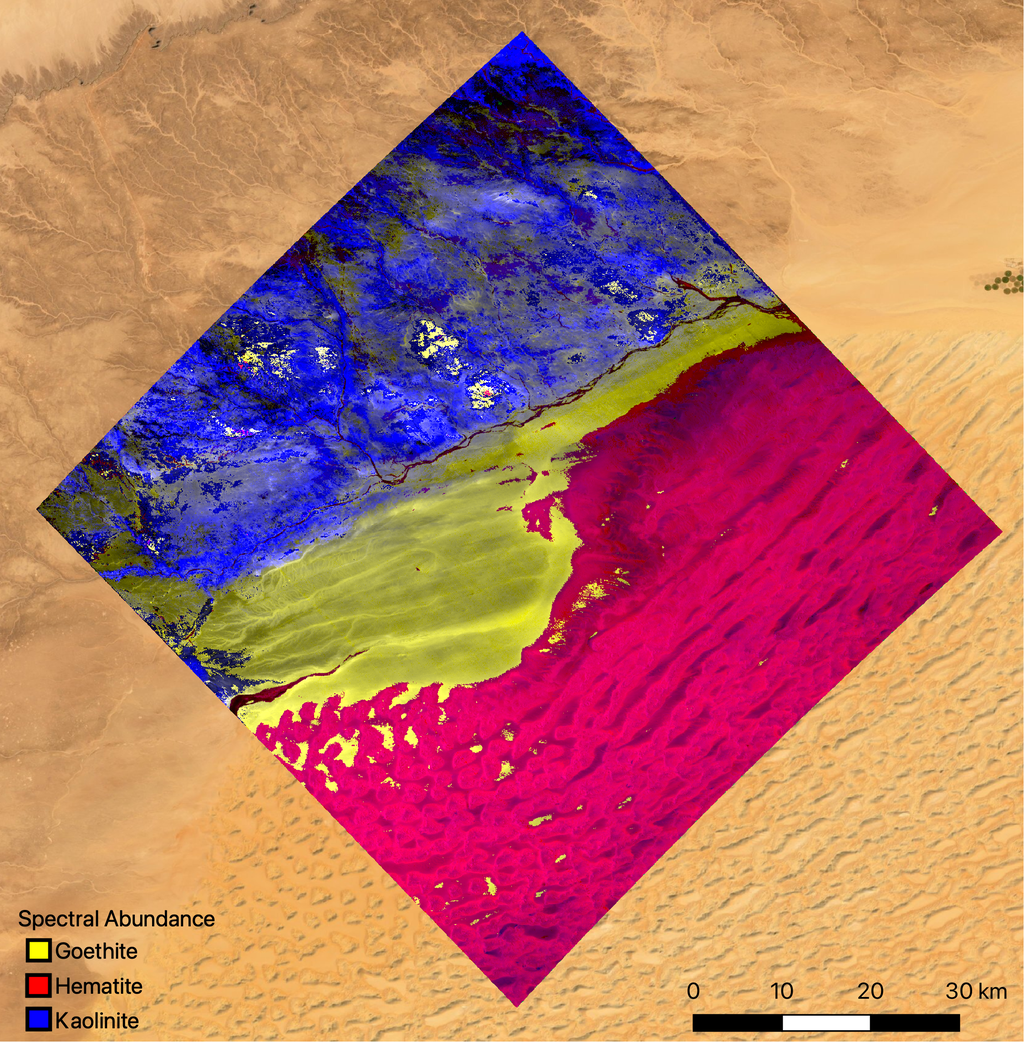 The mineral map shows a part of southwestern Libya, in the Sahara, observed by NASA’s EMIT mission. It depicts areas dominated by kaolinite, a reflective clay mineral that scatters light, and goethite and hematite, iron oxides that absorb heat and warm the surrounding air.

The other mineral map shows substantial amounts of kaolinite as well as two iron oxides, hematite and goethite, in a sparsely populated section of the Sahara about 500 miles (800 kilometers) south of Tripoli. Darker-colored dust particles from iron-oxide-rich areas strongly absorb energy from the Sun and heat the atmosphere, potentially affecting the climate.

EMIT will gather billions of new spectroscopic measurements across six continents, closing this gap in knowledge and advancing climate science. “With this exceptional performance, we are on track to comprehensively map the minerals of Earth’s arid regions – about 25% of the Earth’s land surface – in less than a year and achieve our climate science objectives,” Green said.

EMIT’s data also will be freely available for a wide range of investigations, including, for example, the search for strategically important minerals such as lithium and rare-earth elements. What’s more, the instrument’s technology is laying the groundwork for the future Surface Biology and Geology (SBG) satellite mission, which is part of NASA’s Earth System Observatory, a set of missions aimed at addressing climate change.

EMIT traces its roots to imaging spectrometer technology that NASA’s Airborne Imaging Spectrometer (AIS) first demonstrated in 1982. Designed to identify minerals on Earth’s surface from a low-altitude research aircraft, the instrument delivered surprising results almost immediately. During early test flights near Cuprite, Nevada, AIS detected the unique spectral signature of buddingtonite, a mineral not seen on any previous geological maps of the area.

Paving the way for future spectrometers when it was introduced in 1986, AVIRIS – the airborne instrument that succeeded AIS – has studied geology, plant function, and alpine snowmelt, among other natural phenomena. It has also mapped chemical pollution at Superfund sites and studied oil spills, including the massive Deepwater Horizon leak in 2010. And it flew over the World Trade Center site in Manhattan following the Sept. 11 attacks, locating uncontrolled fires and mapping debris composition in the wreckage.

Over the years, as optics, detector arrays, and computing capabilities have progressed, imaging spectrometers capable of resolving smaller targets and subtler differences have flown with missions across the solar system.

A JPL-built imaging spectrometer on the Indian Space Research Organization’s Chandrayaan-1 probe measured signs of water on the Moon in 2009. NASA’s Europa Clipper, which launches in 2024, will rely on an imaging spectrometer to help scientists assess if the icy Jovian moon has conditions that could support life.

Highly advanced JPL-developed spectrometers will be part of NASA’s forthcoming Lunar Trailblazer – which will determine the form, abundance, and distribution of water on the Moon and the nature of the lunar water cycle – and on satellites to be launched by the nonprofit Carbon Mapper, aimed at spotting greenhouse gas point-sources from space.

“The technology took directions that I would never have imagined,” said Gregg Vane, the JPL researcher whose graduate studies in geology helped inspire the idea for the original imaging spectrometer. “Now with EMIT, we’re using it to look back at our own planet from space for important climate research.”

EMIT was selected from the Earth Venture Instrument-4 solicitation under the Earth Science Division of NASA Science Mission Directorate and was developed at NASA’s Jet Propulsion Laboratory, which is managed for the agency by Caltech in Pasadena, California. It launched aboard a SpaceX Dragon resupply spacecraft from NASA’s Kennedy Space Center in Florida on July 14, 2022. The instrument’s data will be delivered to the NASA Land Processes Distributed Active Archive Center (DAAC) for use by other researchers and the public.