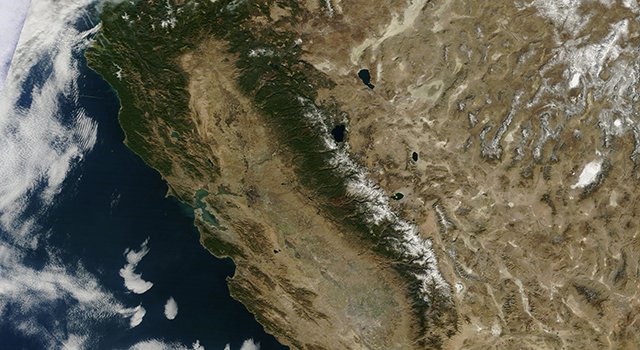 California is currently experiencing one of its driest years on record, with 100 percent of the state in drought conditions as of this week.› Full image and caption
Credit: NASA Earth Observatory

NASA officials will participate in a media briefing on Tuesday, Feb. 25 about the agency's use of Earth observation assets to help the state of California during the drought.

NASA officials will participate in a media briefing at 9:30 a.m. PST Tuesday, Feb. 25 about the agency's work to use its Earth observation assets to help the state of California better manage its water resources and monitor and respond to its ongoing drought.

The briefing will be held at the Sacramento Convention Center in Sacramento.

Audio of the event will be streamed live at: http://www.nasa.gov/newsaudio

At 11:15 a.m. PST on Tuesday, NASA scientists will be available to respond to questions from the public via social media using the hashtag #askNASA.

Following two consecutive years of drought conditions, 2014 is shaping up to be one of California's driest years on record. In January, California Governor Edmund G. Brown Jr. declared a Drought State of Emergency outlining specific responses to the critically dry conditions. NASA and the California Department of Water Resources (DWR) are collaborating to apply NASA's unique satellite and airborne remote sensing resources and research to the drought's challenges.

NASA monitors Earth's vital signs from land, air and space with a fleet of satellites and ambitious airborne and ground-based observation campaigns. The agency shares this unique knowledge with the global community and works with institutions in the United States and around the world that contribute to understanding and protecting our home planet.

A link to relevant graphics will be posted at the start of the briefing at: http://www.nasa.gov/earthrightnow

Drought in the Western United States