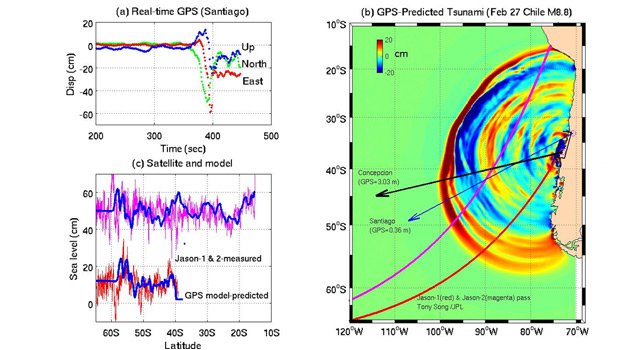 A NASA-led research team has successfully demonstrated for the first time elements of a prototype tsunami prediction system that quickly and accurately assesses large earthquakes and estimates the size of resulting tsunamis.

PASADENA, Calif. – A NASA-led research team has successfully demonstrated for the first time elements of a prototype tsunami prediction system that quickly and accurately assesses large earthquakes and estimates the size of resulting tsunamis.

After the magnitude 8.8 Chilean earthquake on Feb. 27, a team led by Y. Tony Song of NASA's Jet Propulsion Laboratory in Pasadena, Calif., used real-time data from the agency's Global Differential GPS (GDGPS) network to successfully predict the size of the resulting tsunami. The network, managed by JPL, combines global and regional real-time data from hundreds of GPS sites and estimates their positions every second. It can detect ground motions as small as a few centimeters.

"This successful test demonstrates that coastal GPS systems can effectively be used to predict the size of tsunamis," said Song. "This could allow responsible agencies to issue better warnings that can save lives and reduce false alarms that can unnecessarily disturb the lives of coastal residents."

Song's team concluded that the Chilean earthquake, the fifth largest ever recorded by instruments, would generate a moderate, or local, tsunami unlikely to cause significant destruction in the Pacific. The tsunami's effect was relatively small outside of Chile.

"The value of coordinated real-time observations from precision GPS, satellite altimetry and advanced Earth models has been demonstrated," said John LaBrecque, manager of the Solid Earth and Natural Hazards program in the Earth Science Division of NASA's Science Mission Directorate in Washington.

Conventional tsunami warning systems rely on estimates of an earthquake's location, depth and magnitude to determine whether a large tsunami may be generated. However, history has shown earthquake magnitude is not a reliable indicator of tsunami size. Previous tsunami models presume a tsunami's power is determined by how much the seafloor is displaced vertically. Song's theory says horizontal motions of a faulting continental slope also contribute to a tsunami's power by transferring kinetic energy to the ocean.

When the Feb. 27, 2010, earthquake struck, its ground motion was captured by the NASA GDGPS network's station in Santiago, Chile, about 235 kilometers (146 miles) from the earthquake's epicenter. These data were made available to Song within minutes of the earthquake, enabling him to derive the seafloor motions.

Based on these GPS data, Song calculated the tsunami's source energy, ranking it as moderate: a 4.8 on the system's 10-point scale (10 being most destructive). His conclusion was based on the fact that the ground motion detected by GPS indicated the slip of the fault transferred fairly minimal kinetic energy to the ocean.

"We were fortunate to have a station sufficiently close to the epicenter," said Yoaz Bar-Sever, JPL manager of the GDGPS system. "Broad international collaboration is required to densify the GPS tracking network so that it adequately covers all the fault zones that can give rise to large earthquakes around the world."