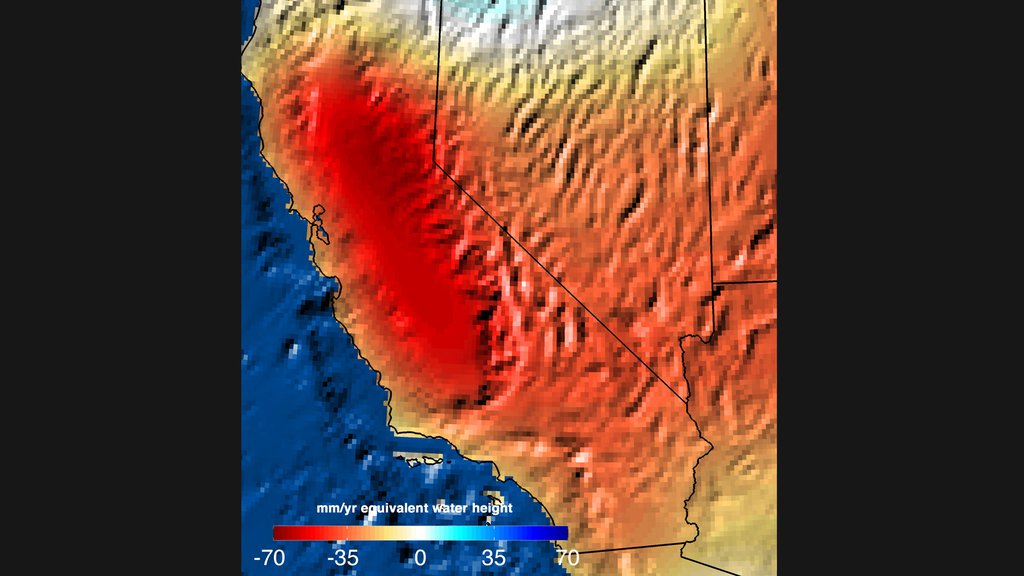 Trends in total water storage in California, Nevada and bordering states from NASA's Gravity Recovery and Climate Experiment (GRACE) satellite mission, September 2011 to September 2014. NASA scientists use these images to better quantify drought and its impact on water availability. Two-thirds of the measured losses were a result of groundwater depletion in California's Central Valley.
Credit: NASA JPL/Caltech

It will take about 1.5 times the maximum volume of the largest U.S. reservoir to recover from California's continuing drought, according to a new analysis of NASA satellite data.

It will take about 11 trillion gallons of water (42 cubic kilometers) -- around 1.5 times the maximum volume of the largest U.S. reservoir -- to recover from California's continuing drought, according to a new analysis of NASA satellite data.

The finding was part of a sobering update on the state's drought made possible by space and airborne measurements and presented by NASA scientists Dec. 16 at the American Geophysical Union meeting in San Francisco. Such data are giving scientists an unprecedented ability to identify key features of droughts, and can be used to inform water management decisions.

A team of scientists led by Jay Famiglietti of NASA's Jet Propulsion Laboratory in Pasadena, California, used data from NASA's Gravity Recovery and Climate Experiment (GRACE) satellites to develop the first-ever calculation of this kind -- the volume of water required to end an episode of drought.

Earlier this year, at the peak of California's current three-year drought, the team found that water storage in the state's Sacramento and San Joaquin river basins was 11 trillion gallons below normal seasonal levels. Data collected since the launch of GRACE in 2002 show this deficit has increased steadily.

"Spaceborne and airborne measurements of Earth's changing shape, surface height and gravity field now allow us to measure and analyze key features of droughts better than ever before, including determining precisely when they begin and end and what their magnitude is at any moment in time," Famiglietti said. "That's an incredible advance and something that would be impossible using only ground-based observations."

GRACE data reveal that, since 2011, the Sacramento and San Joaquin river basins decreased in volume by four trillion gallons of water each year (15 cubic kilometers). That's more water than California's 38 million residents use each year for domestic and municipal purposes. About two-thirds of the loss is due to depletion of groundwater beneath California's Central Valley.

In related results, early 2014 data from NASA's Airborne Snow Observatory indicate that snowpack in California's Sierra Nevada range was only half of previous estimates. The observatory is providing the first-ever high-resolution observations of the water volume of snow in the Tuolumne River, Merced, Kings and Lakes basins of the Sierra Nevada and the Uncompahgre watershed in the Upper Colorado River Basin.

To develop these calculations, the observatory measures how much water is in the snowpack and how much sunlight the snow absorbs, which influences how fast the snow melts. These data enable accurate estimates of how much water will flow out of a basin when the snow melts, which helps guide decisions about reservoir filling and water allocation.

"The 2014 snowpack was one of the three lowest on record and the worst since 1977, when California's population was half what it is now," said Airborne Snow Observatory Principal Investigator Tom Painter of JPL. "Besides resulting in less snow water, the dramatic reduction in snow extent contributes to warming our climate by allowing the ground to absorb more sunlight. This reduces soil moisture, which makes it harder to get water from the snow into reservoirs once it does start snowing again."

New drought maps show groundwater levels across the U.S. Southwest are in the lowest 2 to 10 percent since 1949. The maps, developed at NASA's Goddard Space Flight Center in Greenbelt, Maryland, combine GRACE data with other satellite observations.

"Integrating GRACE data with other satellite measurements provides a more holistic view of the impact of drought on water availability, including on groundwater resources, which are typically ignored in standard drought indices," said Matt Rodell, chief of the Hydrological Sciences Laboratory at Goddard.

The scientists cautioned that while the recent California storms have been helpful in replenishing water resources, they aren't nearly enough to end the multi-year drought.

"It takes years to get into a drought of this severity, and it will likely take many more big storms, and years, to crawl out of it," said Famiglietti.

NASA monitors Earth's vital signs from land, air and space with a fleet of satellites and ambitious airborne and ground-based observation campaigns. The agency develops new ways to observe and study Earth's interconnected natural systems with long-term data records and computer analysis tools to better see how our planet is changing. The agency shares this unique knowledge with the global community and works with institutions in the United States and around the world that contribute to understanding and protecting our home planet.

For more on the Airborne Snow Observatory, visit: