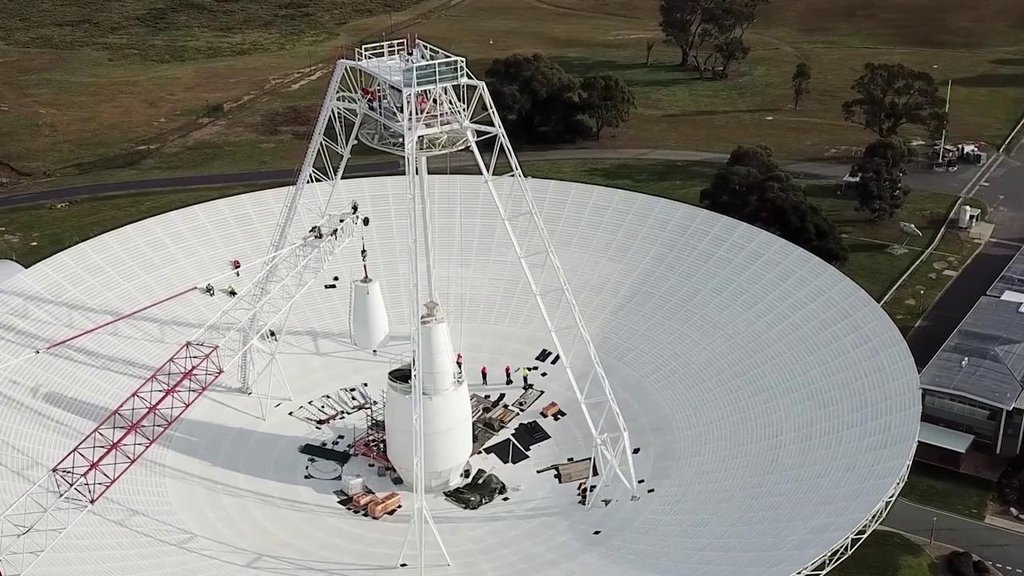 Crews conduct critical upgrades and repairs to the 70-meter-wide (230-foot-wide) radio antenna Deep Space Station 43 in Canberra, Australia. In this image, one of the antenna's white feed cones (which house portions of the antenna receivers) is being moved by a crane.
Credit: CSIRO

The only radio antenna that can command the 43-year-old spacecraft has been offline since March as it gets new hardware, but work is on track to wrap up in February.

On Oct. 29, mission operators sent a series of commands to NASA's Voyager 2 spacecraft for the first time since mid-March. The spacecraft has been flying solo while the 70-meter-wide (230-foot-wide) radio antenna used to talk to it has been offline for repairs and upgrades. Voyager 2 returned a signal confirming it had received the "call" and executed the commands without issue.

The call to Voyager 2 was a test of new hardware recently installed on Deep Space Station 43, the only dish in the world that can send commands to Voyager 2. Located in Canberra, Australia, it is part of NASA's Deep Space Network (DSN), a collection of radio antennas around the world used primarily to communicate with spacecraft operating beyond the Moon. Since the dish went offline, mission operators have been able to receive health updates and science data from Voyager 2, but they haven't been able to send commands to the far-flung probe, which has traveled billions of miles from Earth since its 1977 launch.

Among the upgrades to DSS43, as the dish is known, are two new radio transmitters. One of them, which is used to talk with Voyager 2, hasn't been replaced in over 47 years. Engineers have also upgraded heating and cooling equipment, power supply equipment, and other electronics needed to run the new transmitters.

The successful call to Voyager 2 is just one indication that the dish will be back online in February 2021.

"What makes this task unique is that we're doing work at all levels of the antenna, from the pedestal at ground level all the way up to the feedcones at the center of the dish that extend above the rim," said Brad Arnold, the DSN project manager at NASA's Jet Propulsion Lab in Southern California. "This test communication with Voyager 2 definitely tells us that things are on track with the work we're doing."

The Deep Space Network consist of radio antenna facilities spaced equally around the globe in Canberra; Goldstone, California; and Madrid, Spain. The positioning of the three facilities ensures that almost any spacecraft with a line of sight to Earth can communicate with at least one of the facilities at any time.

Voyager 2 is the rare exception. In order to make a close flyby of Neptune's moon Triton in 1989, the probe flew over the planet's north pole. That trajectory deflected it southward relative to the plane of the planets, and it has been heading in that direction ever since. Now more than 11.6 billion miles (18.8 billion kilometers) from Earth, the spacecraft is so far south that it doesn't have a line of sight with radio antennas in the Northern Hemisphere.

Click on this interactive visualization of NASA's Voyager 2 spacecraft and take it for a spin Launched in 1977, the spacecraft is now more than 11.6 billion miles (18.8 billion kilometers) from Earth. Trace its dramatic history through Eyes on the Solar System. Credit: NASA/JPL-Caltech

DSS43 is the only dish in the Southern Hemisphere that has a transmitter powerful enough and that broadcasts the right frequency to send commands to the distant spacecraft. Voyager 2's faster-moving twin, Voyager 1, took a different path past Saturn and can communicate via antennas at the two DSN facilities in the Northern Hemisphere. The antennas must uplink commands to both Voyagers in a radio frequency range called S-band, and the antennas downlink data from the spacecraft in a range called X-band.

While mission operators haven't been able to command Voyager 2 since DSS43 went offline, the three 34-meter-wide (111-foot-wide) radio antennas at the Canberra facility can be used together to capture the signals that Voyager 2 sends to Earth. The probe is sending back science data from interstellar space, or the region outside our Sun's heliosphere - the protective bubble of particles and magnetic fields created by the Sun that surrounds the planets and the Kuiper Belt (the collection of small, icy bodies beyond Neptune's orbit).

DSS43 began operating in 1972 (five years before the launch of Voyager 2 and Voyager 1) and was only 64 meters (210 feet) wide at the time. It was expanded to 70 meters (230 feet) in 1987 and has received a variety of upgrades and repairs since then. But the engineers overseeing the current work say this is one of the most significant makeovers the dish has received and the longest it's been offline in over 30 years.

"The DSS43 antenna is a highly specialized system; there are only two other similar antennas in the world, so having the antenna down for one year is not an ideal situation for Voyager or for many other NASA missions," said Philip Baldwin, operations manager for NASA's Space Communications and Navigation (SCaN) Program. "The agency made the decision to conduct these upgrades to ensure that the antenna can continue to be used for current and future missions. For an antenna that is almost 50 years old, it's better to be proactive than reactive with critical maintenance."

The repairs will benefit other missions, including the Mars Perseverance rover, which will land on the Red Planet Feb. 18, 2021. The network will also play a critical role in Moon to Mars exploration efforts, ensuring communication and navigation support for both the precursor Moon and Mars missions and the crewed Artemis missions.

The Deep Space Network is managed by JPL for the SCaN Program, located at NASA Headquarters within the Human Exploration and Operations Mission Directorate. The Canberra station is managed on NASA's behalf by Australia's national science agency, the Commonwealth Scientific and Industrial Research Organisation.