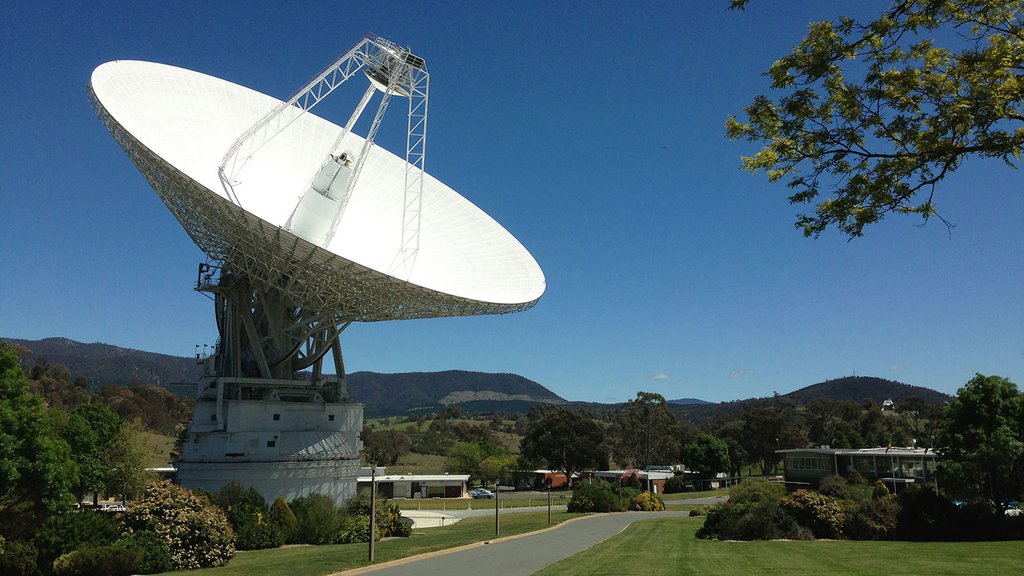 DSS43 is a 70-meter-wide (230-feet-wide) radio antenna at the Deep Space Network's Canberra facility in Australia. It is the only antenna that can send commands to the Voyager 2 spacecraft.
Credit: NASA/Canberra Deep Space Communication Complex

The antenna enhancements will improve future spacecraft communications, but during the upgrades, Voyager 2 will not be able to receive new commands from Earth.

Starting in early March, NASA's Voyager 2 will quietly coast through interstellar space without receiving commands from Earth. That's because the Voyager's primary means of communication, the Deep Space Network's 70-meter-wide (230-feet-wide) radio antenna in Canberra, Australia, will be undergoing critical upgrades for about 11 months. During this time, the Voyager team will still be able to receive science data from Voyager 2 on its mission to explore the outermost edge of the Sun's domain and beyond.

About the size of a 20-story office building, the dish has been in service for 48 years. Some parts of the 70-meter antenna, including the transmitters that send commands to various spacecraft, are 40 years old and increasingly unreliable. The Deep Space Network (DSN) upgrades are planned to start now that Voyager 2 has returned to normal operations, after accidentally overdrawing its power supply and automatically turning off its science instruments in January.

The network operates 24 hours a day, 365 days a year and is spread over three sites around the world, in California, Spain and Australia. This allows navigators to communicate with spacecraft at the Moon and beyond at all times during Earth's rotation. Voyager 2, which launched in 1977, is currently more than 11 billion miles (17 billion kilometers) from Earth. It is flying in a downward direction relative to Earth's orbital plane, where it can be seen only from the southern hemisphere and thus can communicate only with the Australian site.

Moreover, a special S-band transmitter is required to send commands to Voyager 2 - one both powerful enough to reach interstellar space and on a frequency that can communicate with Voyager's dated technology. The Canberra 70-meter antenna (called "DSS43") is the only such antenna in the southern hemisphere. As the equipment in the antenna ages, the risk of unplanned outages will increase, which adds more risk to the Voyager mission. The planned upgrades will not only reduce that risk, but will also add state-of-the art technology upgrades that will benefit future missions.

"Obviously, the 11 months of repairs puts more constraints on the other DSN sites," said Jeff Berner, Deep Space Network's chief engineer. "But the advantage is that when we come back, the Canberra antenna will be much more reliable."

The repairs will benefit far more than Voyager 2, including future missions like the Mars 2020 rover and Moon to Mars exploration efforts. The network will play a critical role in ensuring communication and navigation support for both the precursor Moon and Mars missions and the crewed Artemis missions. "The maintenance is needed to support the missions that NASA is developing and launching in the future, as well as supporting the missions that are operating right now," said Suzanne Dodd, Voyager project manager and JPL Director for the Interplanetary Network.

The three Canberra 34-meter (111-foot) antennas can be configured to listen to Voyager 2's signal; they just won't be able to transmit commands. In the meantime, said Dodd, the Voyager team will put the spacecraft into a quiescent state, which will still allow it to send back science data during the 11-month downtime.

"We put the spacecraft back into a state where it will be just fine, assuming that everything goes normally with it during the time that the antenna is down," said Dodd. "If things don't go normally - which is always a possibility, especially with an aging spacecraft - then the onboard fault protection that's there can handle the situation."

Berner says the work on the 70-meter antenna is like bringing an old car into the shop: There's never a good time to do it, but it will make the car much more dependable if you do.

The work on the Canberra DSN station is expected to be completed by January 2021. The DSN is managed by NASA's Jet Propulsion Laboratory for the agency's Human Exploration and Operations' Space Communication and Navigation program.