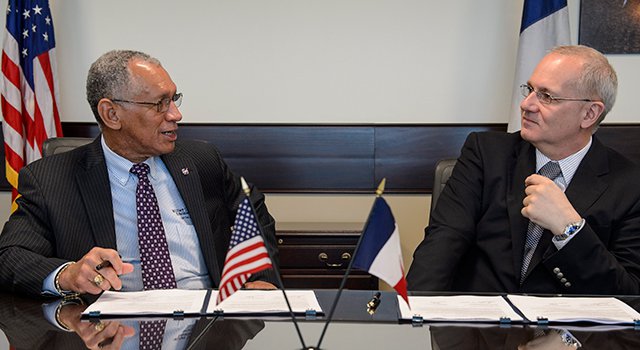 NASA Administrator Charles Bolden, left, and Centre National d'Études Spatiales (CNES) President Jean-Yves Le Gall talk after signing an agreement to move from feasibility studies to implementation of the Surface Water and Ocean Topography (SWOT) mission at NASA Headquarters in Washington. The SWOT mission will use wide swath altimetry technology to produce high-resolution elevation measurements of the surface of lakes, reservoirs and wetlands and of the ocean surface.
Credit: NASA/Bill Ingalls 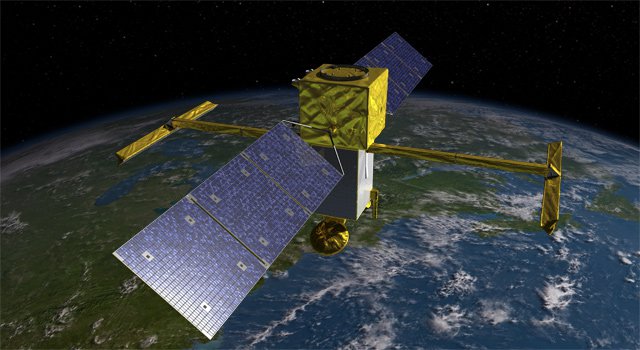 NASA and the French space agency Centre National d'Études Spatiales (CNES) have agreed to jointly build, launch and operate a spacecraft to conduct the first-ever global survey of Earth's surface water and to map ocean surface height with unprecedented detail.

NASA Administrator Charles Bolden and CNES President Jean-Yves Le Gall signed an agreement Friday at NASA Headquarters in Washington to move from feasibility studies to implementation of the Surface Water and Ocean Topography (SWOT) mission. The two agencies began initial joint studies on the mission in 2009 and plan to complete preliminary design activities in 2016, with launch planned in 2020.

"With this mission, NASA builds on a legacy of Earth science research and our strong relationship with CNES to develop new ways to observe and understand our changing climate and water resources," said NASA Administrator Charles Bolden. "The knowledge we'll gain from SWOT will help decision makers better analyze, anticipate and act to influence events that will affect us and future generations."

SWOT is one of the NASA missions recommended in the National Research Council's 2007 decadal survey of Earth science priorities. The satellite will survey 90 percent of the globe, studying Earth's lakes, rivers, reservoirs and ocean to aid in freshwater management around the world and improve ocean circulation models and weather and climate predictions.

The SWOT mission will use wide swath altimetry technology to produce high-resolution elevation measurements of the ocean surface and the surface of lakes, reservoirs and wetlands. A more complete inventory of Earth's lakes and the changing amount of water they hold will yield improved assessments of how climate-induced changes can impact freshwater resources worldwide. Only 15 percent of lakes around the world are currently measured from space. SWOT will inventory a majority of medium to large lakes, as well as the discharge volumes of rivers.

SWOT will be able to measure the ocean's surface with 10 times the resolution of current technologies. This will allow scientists to study small-scale features that are key components of how heat and carbon are exchanged between the ocean and atmosphere. The higher resolution of SWOT observations will enable researchers to compute the velocity and energy of ocean circulation. A better understanding of small-scale ocean currents and eddies is also important to impacts on coastal regions such as navigation, erosion and dispersing pollutants.

For more information on the SWOT mission, visit: