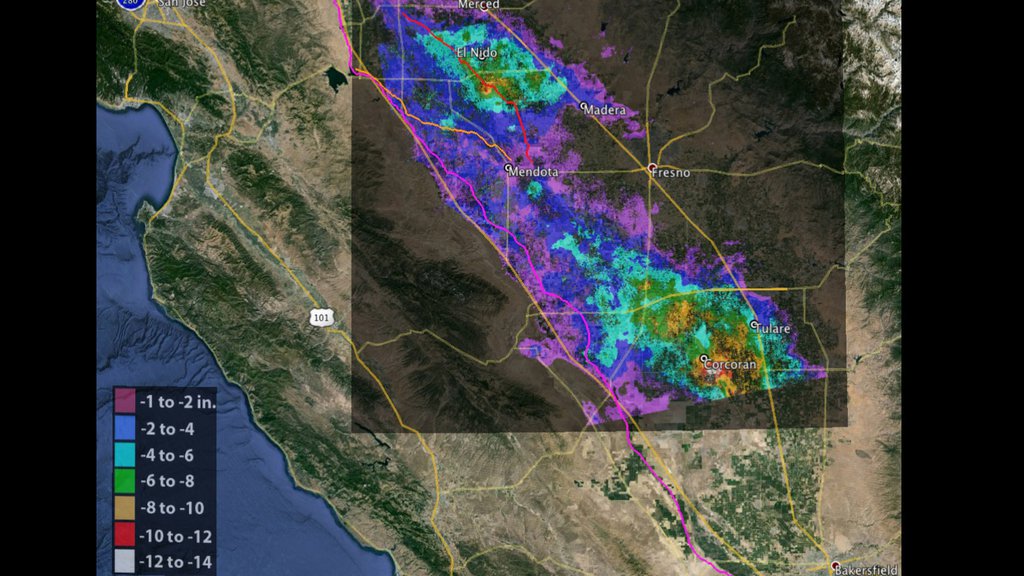 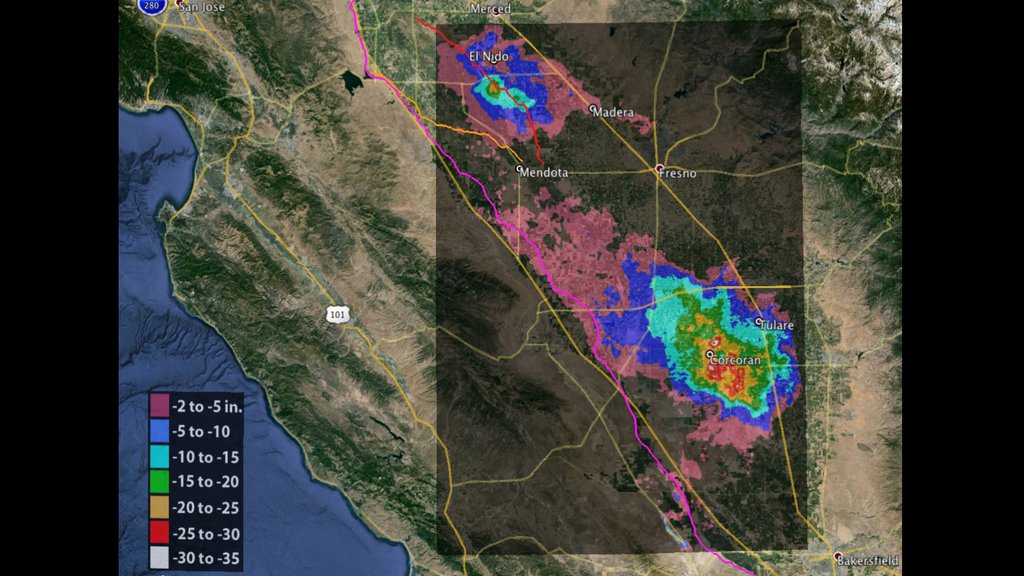 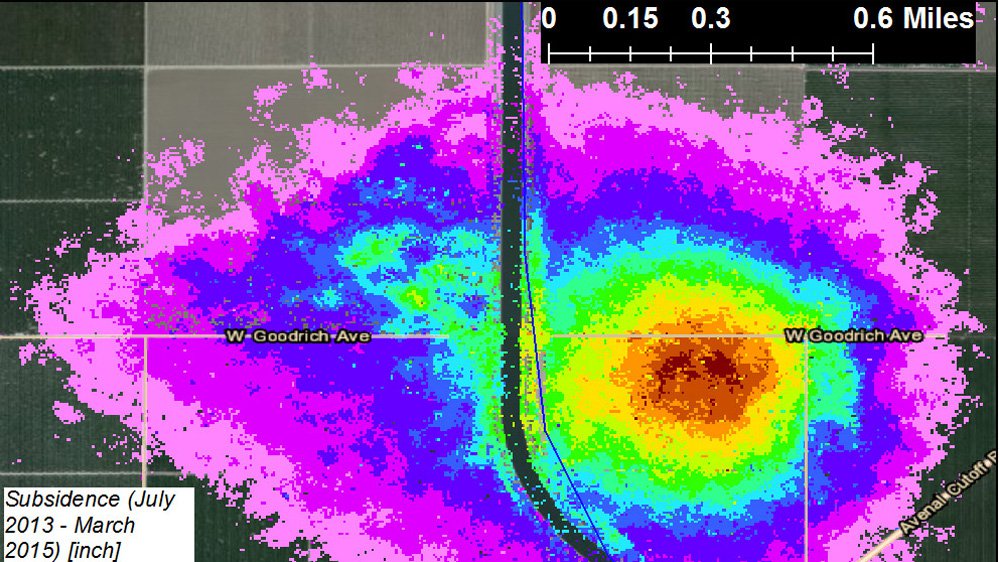 A new NASA report shows land in California's San Joaquin Valley is sinking faster than ever as Californians continue pumping groundwater in response to the historic drought.

As Californians continue pumping groundwater in response to the historic drought, the California Department of Water Resources today released a new NASA report showing land in the San Joaquin Valley is sinking faster than ever before, nearly 2 inches (5 centimeters) per month in some locations.

The report, Progress Report: Subsidence in the Central Valley, California, prepared for DWR by researchers at NASA's Jet Propulsion Laboratory, Pasadena, California, is available at:

"Because of increased pumping, groundwater levels are reaching record lows -- up to 100 feet (30 meters) lower than previous records," said Department of Water Resources Director Mark Cowin. "As extensive groundwater pumping continues, the land is sinking more rapidly and this puts nearby infrastructure at greater risk of costly damage."

Sinking land, known as subsidence, has occurred for decades in California because of excessive groundwater pumping during drought conditions, but the new NASA data show the sinking is happening faster, putting infrastructure on the surface at growing risk of damage.

NASA obtained the subsidence data by comparing satellite images of Earth's surface over time. Over the last few years, interferometric synthetic aperture radar (InSAR) observations from satellite and aircraft platforms have been used to produce maps of subsidence with approximately centimeter-level accuracy. For this study, JPL researchers analyzed satellite data from Japan's PALSAR (2006 to 2010); and Canada's Radarsat-2 (May 2014 to January 2015), and then produced subsidence maps for those periods. High-resolution InSAR data were also acquired along the California Aqueduct by NASA's Uninhabited Aerial Vehicle Synthetic Aperture Radar (UAVSAR) (2013 to 2015) to identify and quantify new, highly localized areas of accelerated subsidence along the aqueduct that occurred in 2014. The California Aqueduct is a system of canals, pipelines and tunnels that carries water collected from the Sierra Nevada Mountains and Northern and Central California valleys to Southern California.

Using multiple scenes acquired by these systems, the JPL researchers were able to produce time histories of subsidence at selected locations, as well as profiles showing how subsidence varies over space and time.

"This study represents an unprecedented use of multiple satellites and aircraft to map subsidence in California and address a practical problem we're all facing," said JPL research scientist and report co-author Tom Farr. "We're pleased to supply the California DWR with information they can use to better manage California's groundwater. It's like the old saying: 'you can't manage what you don't measure'."

Using the UAVSAR data, NASA also found areas near the California Aqueduct sank up to 12.5 inches (32 centimeters), with 8 inches (20 centimeters) of that occurring in just four months of 2014.

"Subsidence is directly impacting the California Aqueduct, and this NASA technology is ideal for identifying which areas are subsiding the most in order to focus monitoring and repair efforts," said JPL research scientist and study co-author Cathleen Jones. "Knowledge is power, and in this case knowledge can save water and help the state better maintain this critical element of the state's water delivery system." UAVSAR flies on a C-20A research aircraft based at NASA's Armstrong Flight Research Center facility in Palmdale, California.

"Groundwater acts as a savings account to provide supplies during drought, but the NASA report shows the consequences of excessive withdrawals as we head into the fifth year of historic drought," Director Cowin said. "We will work together with counties, local water districts, and affected communities to identify ways to slow the rate of subsidence and protect vital infrastructure such as canals, pumping stations, bridges and wells."

DWR also completed a recent land survey along the Aqueduct -- which found 70-plus miles (113-plus kilometers) in Fresno, Kings and Kern counties sank more than 1.25 feet (0.4 meters) in two years -- and will now conduct a system-wide evaluation of subsidence along the California Aqueduct and the condition of State Water Project facilities. The evaluation will help the department develop a capital improvement program to repair damage from subsidence. Past evaluations found that segments of the Aqueduct from Los Banos to Lost Hills sank more than 5 feet (1.5 meters) since construction.

NASA and the Indian Space Research Organisation are jointly developing the NASA-ISRO Synthetic Aperture Radar (NISAR) mission. Targeted to launch in 2020, NISAR will make global measurements of the causes and consequences of land surface changes. Potential areas of research include ecosystem disturbances, ice sheet collapse and natural hazards. The NISAR mission is optimized to measure subtle changes of Earth's surface associated with motions of the crust and ice surfaces. NISAR will improve our understanding of key impacts of climate change and advance our knowledge of natural hazards.

The full DWR news release is online at: