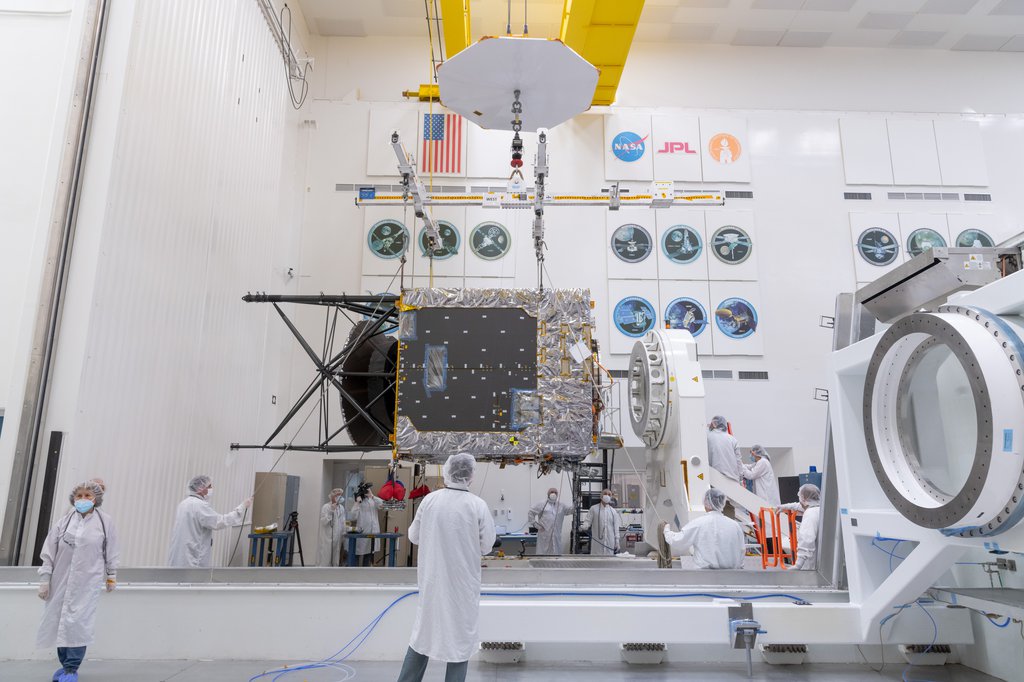 In late March of 2021, a main component of NASA’s Psyche spacecraft was delivered to JPL, where assembly, test, and launch operations are underway. Credit: NASA/JPL-Caltech Full Image Details 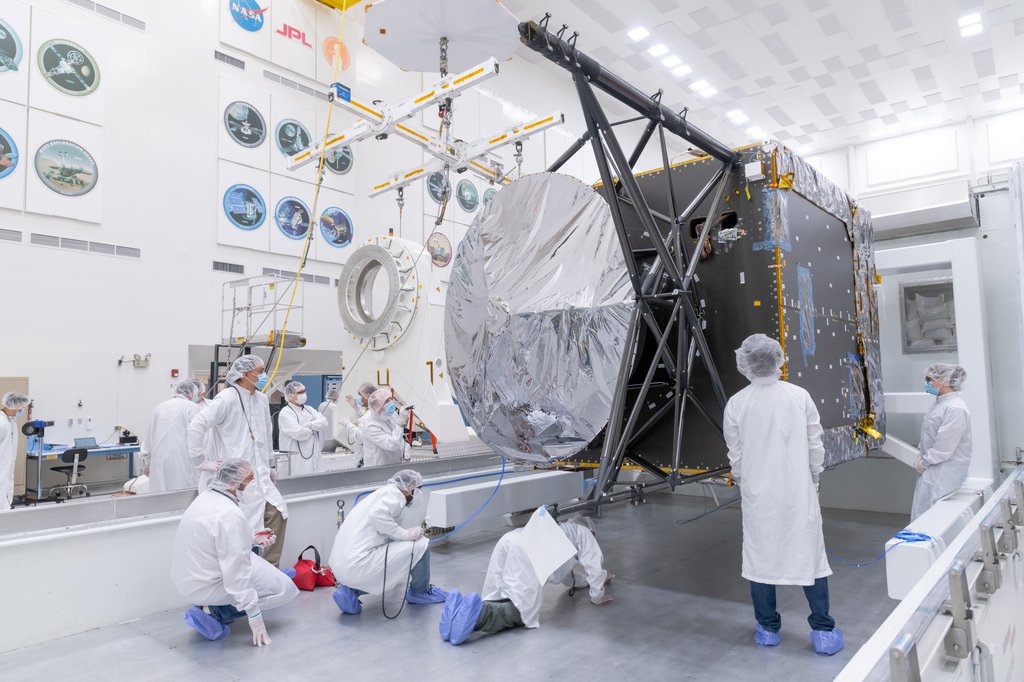 Engineers and technicians prepare to move the chassis of NASA’s Psyche spacecraft from its shipping container to a dolly inside JPL’s Spacecraft Assembly Facility just after the chassis was delivered by Maxar Technologies in late March of 2021. Credit: NASA/JPL-Caltech Full Image Details 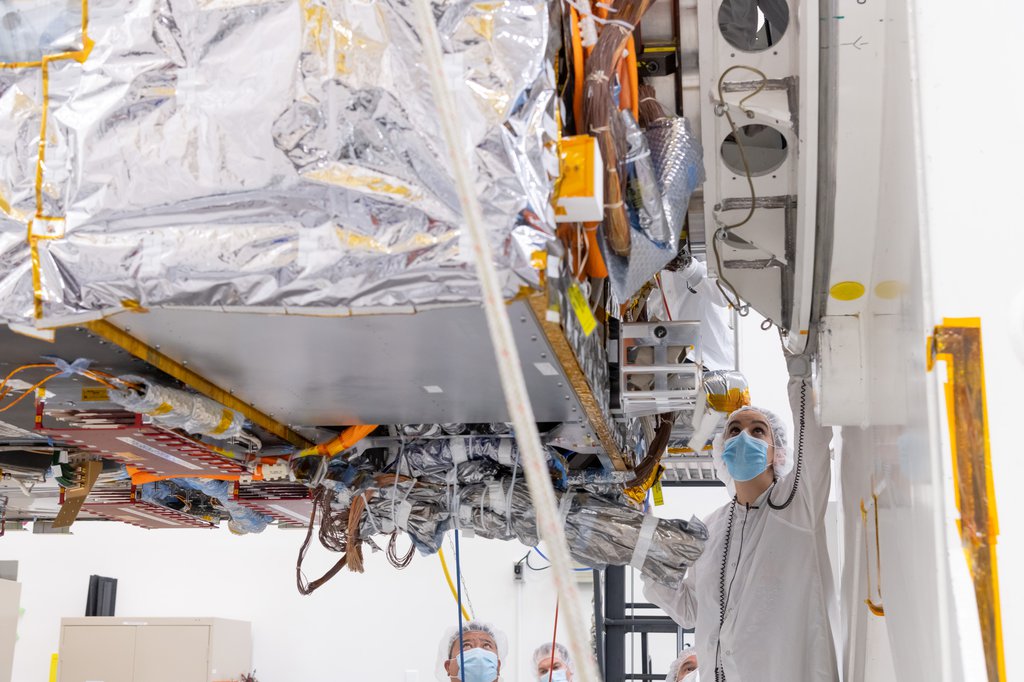 After its delivery to JPL in late March of 2021, NASA’s Psyche spacecraft chassis was attached to a rotation fixture, where it will be integrated with additional flight hardware three science instruments. Once assembled, the spacecraft will ship to Cape Canaveral, Florida, for an August 2022 launch. Credit: NASA/JPL-Caltech Full Image Details

Set to launch next year, the agency’s Psyche spacecraft will explore a metal-rich asteroid in the main asteroid belt between Mars and Jupiter.

A major component of NASA’s Psyche spacecraft has been delivered to the agency’s Jet Propulsion Laboratory in Southern California, where the phase known as assembly, test, and launch operations is now underway. Over the next year, the spacecraft will finish assembly and undergo rigorous checkout and testing before it’s shipped to Cape Canaveral, Florida, for an August 2022 launch to the main asteroid belt.

The Solar Electric Propulsion (SEP) Chassis, crafted by Maxar Technologies’ team in Palo Alto, California, is the size of a van and represents more than 80% (by mass) of the hardware that will ultimately make up the Psyche spacecraft. The large, box-shaped structure made a dramatic entrance as it rolled into the white-walled clean room of JPL’s storied High Bay 1 of the Spacecraft Assembly Facility. Some of the chassis’ most visible features include the 6.5-foot-wide (2-meter-wide) high-gain antenna, the frame that will hold the science instruments, and bright red protective covers to safeguard delicate hardware.

“Seeing this big spacecraft chassis arrive at JPL from Maxar is among the most thrilling of the milestones we’ve experienced on what has already been a 10-year journey,” said Arizona State University’s Lindy Elkins-Tanton, who as principal investigator leads the Psyche mission. “Building this complex, precision piece of engineering during the year of COVID is absolutely a triumph of human determination and excellence.” 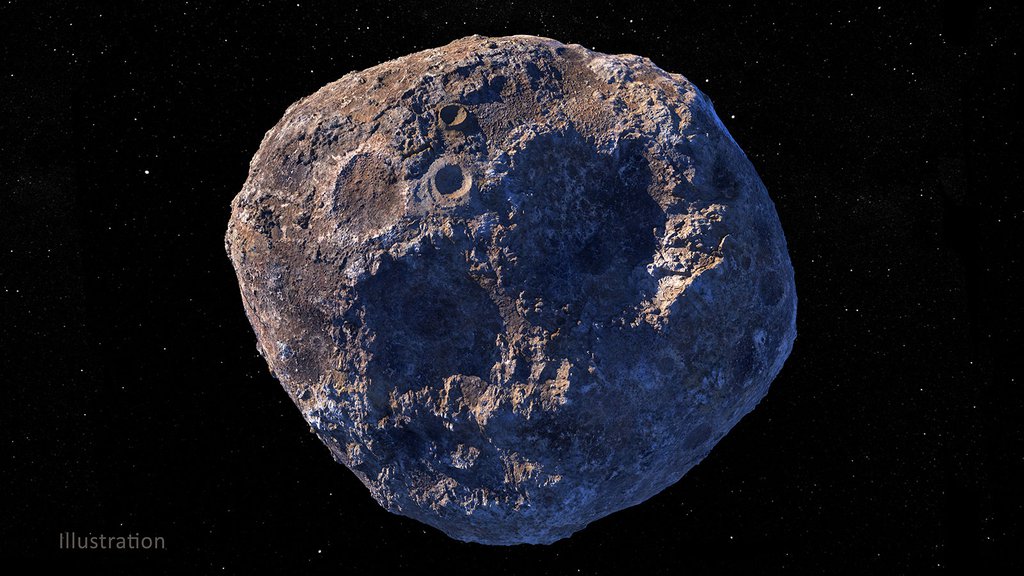 Psyche’s target is a metal-rich asteroid of the same name, which orbits the Sun in the main asteroid belt between Mars and Jupiter. Scientists think that Psyche is largely iron and nickel and could be the core of an early planet. Exploring the asteroid Psyche (about 140 miles, or 226 kilometers, wide) could lend valuable insight into how Earth and other planets formed.

Over the next 12 months, the project team will be working against the clock to meet deadlines in the runup to launch.

“It’s exciting watching it all come together, and it’s the part of the project life cycle that I love the most,” said Psyche Project Manager Henry Stone of JPL. “But it’s a really intense phase as well. It’s intricate choreography, and if one activity runs into a problem, it can impact the whole process. Staying on schedule at this phase of the mission is absolutely critical.”

The SEP Chassis comes to JPL with most of the engineering hardware systems already integrated. The Maxar team built the entire structure and integrated the hardware needed for the high-power electrical system, the propulsion systems, the thermal system, and the guidance and navigation system. The Psyche mission will take advantage of Maxar’s superefficient electric propulsion system to push Psyche through deep space. Maxar will also deliver the large, twin five-panel solar arrays that provide the power for the spacecraft systems.

“Delivering the SEP Chassis to NASA’s JPL is an incredible accomplishment for us at Maxar,” said Steven Scott, Maxar’s Psyche program manager. “I am so proud of our team. We’ve managed to design and build an SEP spacecraft for a billion-mile journey through a low-power environment, all while prioritizing the health and safety of our team during a global pandemic. The collaboration between Maxar, Arizona State University, and NASA’s JPL is a model for success, and we’re honored to be part of the Psyche Mission." 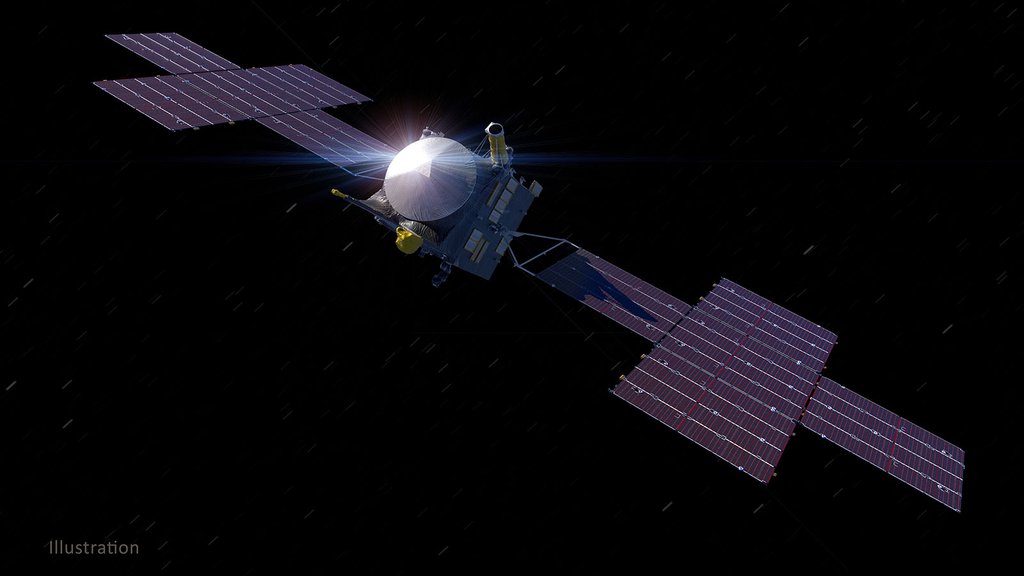 An illustration, created in March 2021, of NASA’s Psyche spacecraft, which is targeted to launch to the main asteroid belt in August 2022 to investigate the metal-rich asteroid Psyche. Credit: NASA/JPL-Caltech/ASU Full Image Details

The assembly, test, and launch operations phase kicked off March 16, when engineers gathered in High Bay 1 to begin checking out the JPL-supplied subsystems, the flight computer, the communications system, and the low-power distribution system to be sure they work together. Now that the chassis has arrived, JPL and Maxar engineers will begin installing the remaining hardware, testing as they go.

The mission’s three science instruments will arrive at JPL over the next few months. The magnetometer will investigate the asteroid’s potential magnetic field. The multispectral imager will capture images of its surface. And the spectrometer will analyze the neutrons and gamma rays coming from the surface to determine the elements that make up the asteroid. JPL is also providing a technology demonstration instrument that will test high data-rate laser communications that could be used by future NASA missions.

A major component of NASA’s Psyche spacecraft has been delivered to the agency’s Jet Propulsion Laboratory in Southern California, where the phase known as assembly, test, and launch operations is now underway. Over the next year, the spacecraft will finish assembly and undergo rigorous checkout and testing before it’s shipped to Cape Canaveral, Florida, for an August 2022 launch to the main asteroid belt.

Once the full spacecraft is assembled, the orbiter will move from the Spacecraft Assembly Facility to JPL’s large thermal vacuum chamber – a massive undertaking in itself – to simulate the harsh environment of deep space. The chamber is where JPL engineers will begin the heavy-duty testing to ensure the entire machine can survive deep space, thrust with the electric propulsion system, take science measurements, and communicate with Earth.

By next spring, the fully assembled Psyche will be shipped to NASA’s Kennedy Space Center in advance of its August 2022 target launch date. The spacecraft will fly by Mars for a gravity assist in May 2023 and in early 2026, will go into orbit around the asteroid, where it will spend 21 months gathering science data.