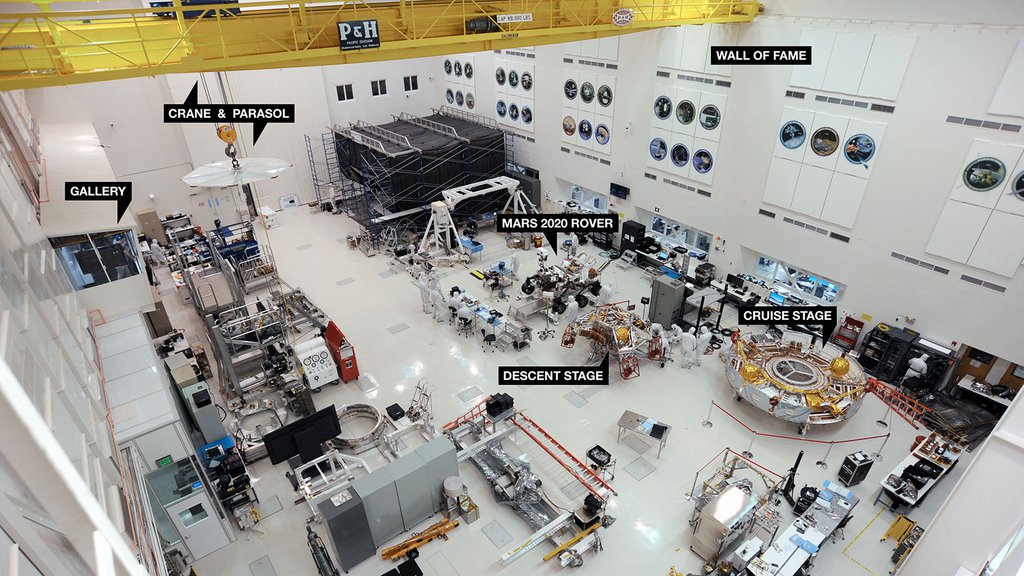 The High Bay 1 clean room within the Spacecraft Assembly Facility at JPL is seen in this image taken on Nov. 12, 2019. The Mars 2020 rover is visible just above center.› Full image and caption
Credit: NASA/JPL-Caltech 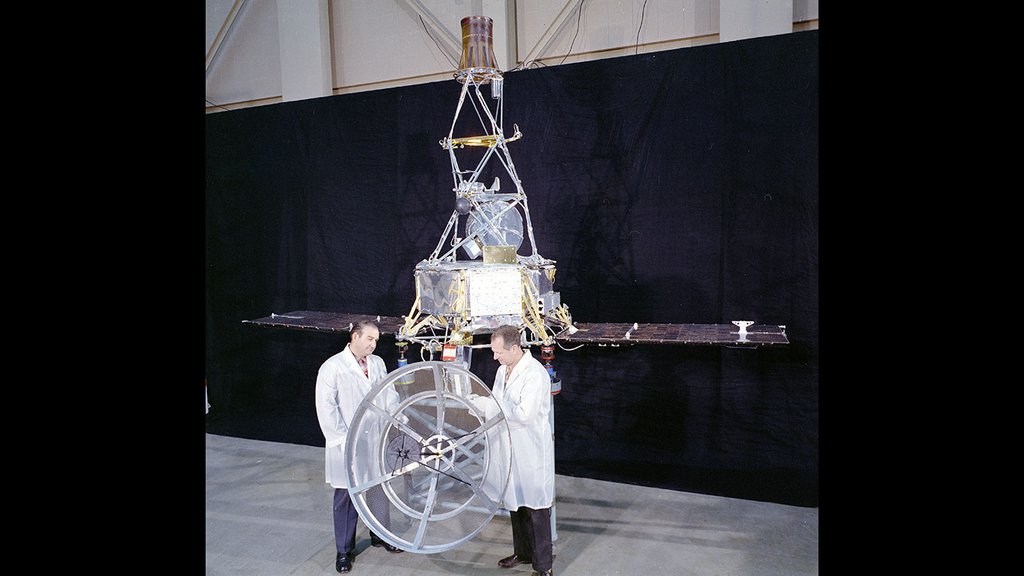 JPL's Spacecraft Assembly Facility looks more like a hangar in this photo of two engineers standing with Mariner 1 on May 2, 1962. However, the gowning procedures were far less rigorous than they are today. Mariner 1 was destroyed during its attempted launch to Venus.› Full image and caption
Credit: NASA/JPL-Caltech 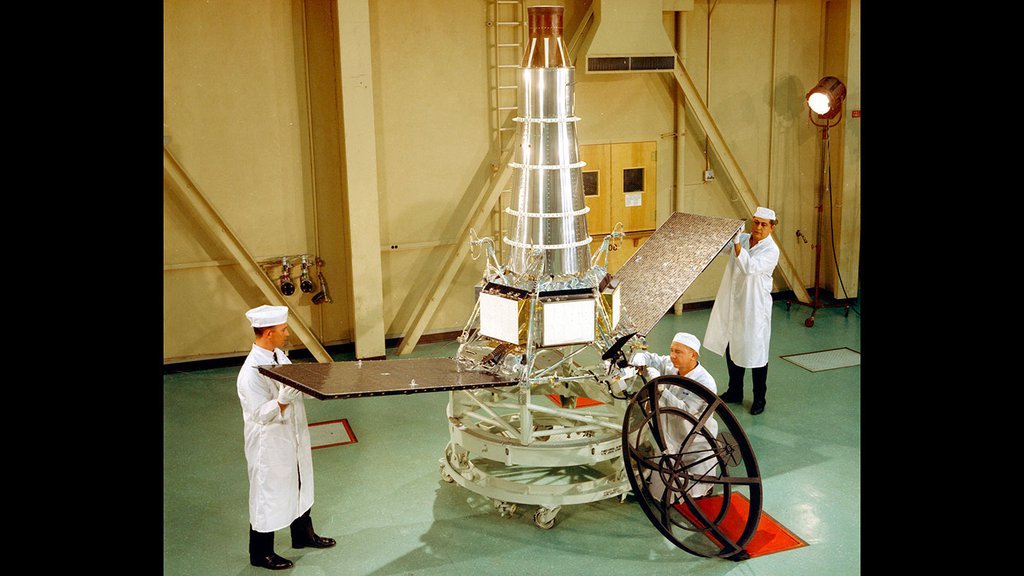 High Bay 1 looks more like a modern clean room in this photo of Ranger 7 taken on Dec. 10, 1963, in JPL's Spacecraft Assembly Facility. Gowning has started to include head covers.› Full image and caption
Credit: NASA/JPL-Caltech 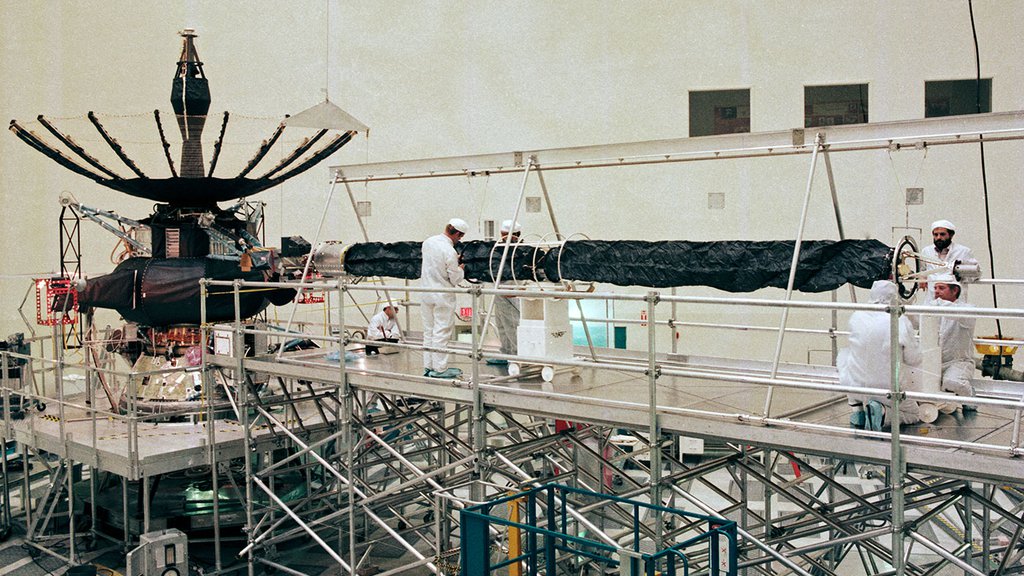 White walls and scaffolding had become a common sight in the High Bay 1 clean room in JPL's Spacecraft Assembly Facility by the time the Galileo orbiter was being built. This photo from Nov. 1, 1984 shows that gowning requirements had also become more complex.› Full image and caption
Credit: NASA/JPL-Caltech 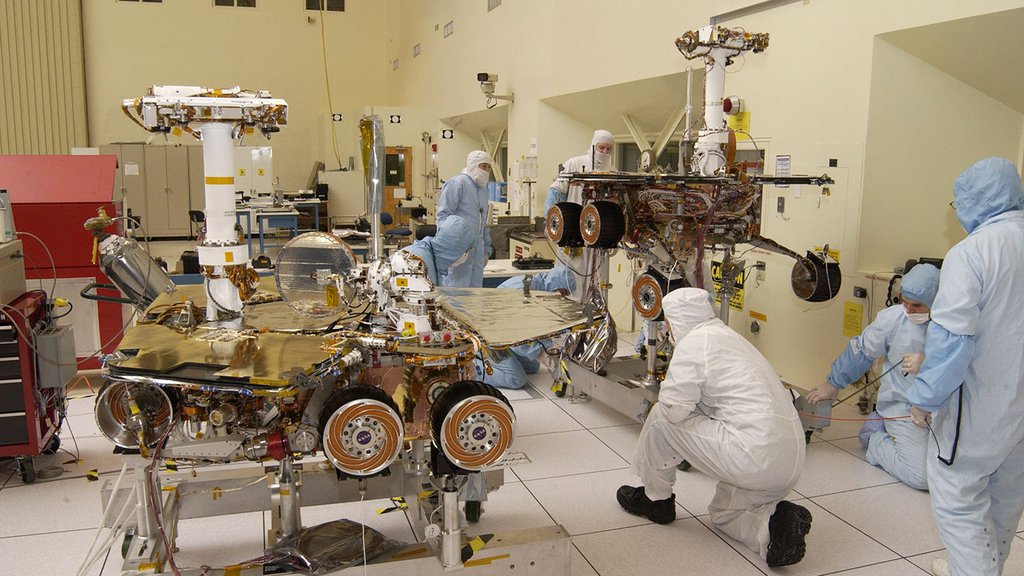 High Bay 1 looks much as it does today in this photo of NASA's Spirit and Opportunity Mars rovers being tested on Feb. 10, 2003. Some workers are wearing booties and others wear shoes that were stored in the gowning area and cleaned regularly.› Full image and caption
Credit: NASA/JPL-Caltech

From rockets to rovers, JPL's Spacecraft Assembly Facility has been at the center of robotic spaceflight. Here's a closer look at what makes it so special.

Built in 1961, the Spacecraft Assembly Facility at NASA's Jet Propulsion Laboratory in Pasadena, California, is the cradle of robotic space exploration.

The first probes launched to the Moon, Mars and Venus were assembled here. So were all of NASA's Mars rovers, Galileo and Cassini (the first orbiters to Jupiter and Saturn), and the twin Voyager spacecraft that are scouting the farthest reaches of the solar system. A new rover, Mars 2020, is going through final testing in this facility before being shipped in February to Cape Canaveral, Florida, where it will launch this summer.

The Spacecraft Assembly Facility's construction marks when JPL transitioned from missiles to space exploration, according to JPL historian Erik Conway. "It's where all JPL-built missions from 1962 onward were assembled," he said. "It was originally just one high bay. They added a second in 1976, during the construction of the Voyagers."

The facility's best-known features are a pair of eggshell-white clean rooms called High Bay 1 and High Bay 2. Through the windows of each room's viewing gallery, visitors can watch engineers gowned in white "bunny suits" testing Earth-observing satellites and robots built for alien worlds. More than 30,000 members of the public visit High Bay 1 each year.

As the name implies, a clean room has to be pristine: Dust, hair, oils and other particulates in the air can interfere with electronics and moving parts. All efforts are made to keep bacteria to a minimum as well. Scientists don't want to discover life only to find it was accidentally sent from Earth.

"The whole idea of a clean room for spacecraft assembly comes out of the Ranger program," Conway said.

As pathfinders for the Apollo missions that followed, the nine Ranger missions were essentially unarmed missiles fired at the Moon. All but the first two were built in High Bay 1, back when it looked more like an aircraft hangar; engineers even smoked in it. The standards for manufacturing spacecraft were just being established.

Sterilizing a spacecraft with heat appeared to fry Ranger 3's electronics, causing it to miss the Moon by 22,000 miles (35,000 kilometers). Debris floating inside Ranger 4 is believed to have led to its failure. Engineers began to realize that specialized clean rooms and cleaning processes were needed to build successful missions.

"When JPL started, we knew more about spacecraft than anybody else - and we knew nothing," said Arden Acord, a systems engineer who began working at JPL in 1971. "We learned a lot of things along the way."

Many of his first coworkers had built the Sergeant and Corporal missiles when JPL was still a U.S. Army lab. Acord was a self-described long-haired hippie working alongside guys with crew cuts: "It was a tough club to break into for a while. But eventually I became accepted." He went on to help build the twin Viking orbiters, which carried the first successful Mars landers, Voyager 1 and 2, and Galileo and Cassini.

Two Rooms for Earth and Beyond

Almost all the spacecraft Acord worked on were built in High Bay 1, which in 1973 became what's known as a Class 10,000 clean room. That means there are fewer than 10,000 particles of 0.5 microns or larger in size per cubic foot of air volume (0.5 microns is about 200 times smaller than the width of a human hair).

Deep space missions tend to be bigger and require more ground equipment, so they typically go in High Bay 1 and involve more gowning for planetary protection purposes. Being the smaller of the pair, High Bay 2 is more suitable for the spacecraft of Earth science missions. The high bays' hangar-door dimensions determine the maximum size of the spacecraft that can be built within.

Of course, filtered air is only part of what makes a clean room clean.

"The level of cleanliness changes depending on the spacecraft you're building," said Roger Francis, the building's facility manager. "If you have special lenses, like a telescope, it requires more effort to make sure particles don't affect your instruments."

But regardless of the type of spacecraft, staff regularly wipe down surfaces with 180-proof isopropyl rubbing alcohol, push microfiber mops across the floors and use HEPA vacuums along wall corners, while the walls themselves are cleaned up to 10 feet (3 meters) high. Most metal is stainless steel, which resists corroding and releasing particles into the air.

Then there are the rigorous procedures required for everything that enters the clean room.

For spacecraft and their separate components, that means being wrapped in plastic and brought into an airlock outside the clean room. They're unwrapped on the "dirty side" of the room and wiped down before being moved to the clean side.

A crane capable of lifting 30,000 pounds (13,608 kilograms) slides along the ceiling of each room, assisting workers as they move equipment through the high bays. A white parasol on each crane's cable catches any grease or debris from the crane that could land on the sensitive hardware below.

People follow a special process before entering the clean room as well: Automated shoe brushes and sticky mats remove debris from their shoes before they enter a locker room. Once their feet are covered with booties, they step over a line onto the clean side of the room.

Then it's time to don a bunny suit, face mask, hair cover and latex gloves before taping sleeves closed. (A mannequin called High Bay Bob stands on the floor of High Bay 1, demonstrating proper attire and giving visitors a sense of scale.) Finally, they step into an "air shower" that blows stray particles off the outside of their garments.

Static electricity can interfere with electronics, so personnel wear an antistatic cord around one wrist, with a clip on the other end to attach to hardware in the clean room. As added precautions against static electricity, humidity in the room is kept at about 45% and the concrete floor has a special epoxy coating to bleed static charge that builds up in garments as people move about the room.

The Wall of Fame

The mission emblems that line the top of High Bay 1's south wall aren't exempt from the cleanliness requirements. The idea for the placards came about in 2008, when Acord was tasked with preserving the Spacecraft Assembly Facility's history. Representing JPL's biggest missions, the emblems would serve as a testament to engineers' hard work assembling and testing hardware.

Visitors to High Bay 1 may have noticed the south wall is running out of room for additional placards. But there's always more space to explore: Emblems might expand onto the east wall in the future.

Here are all the missions that have passed through
Which Missions Get Emblems on JPL's Spacecraft Assembly Facility's Wall?