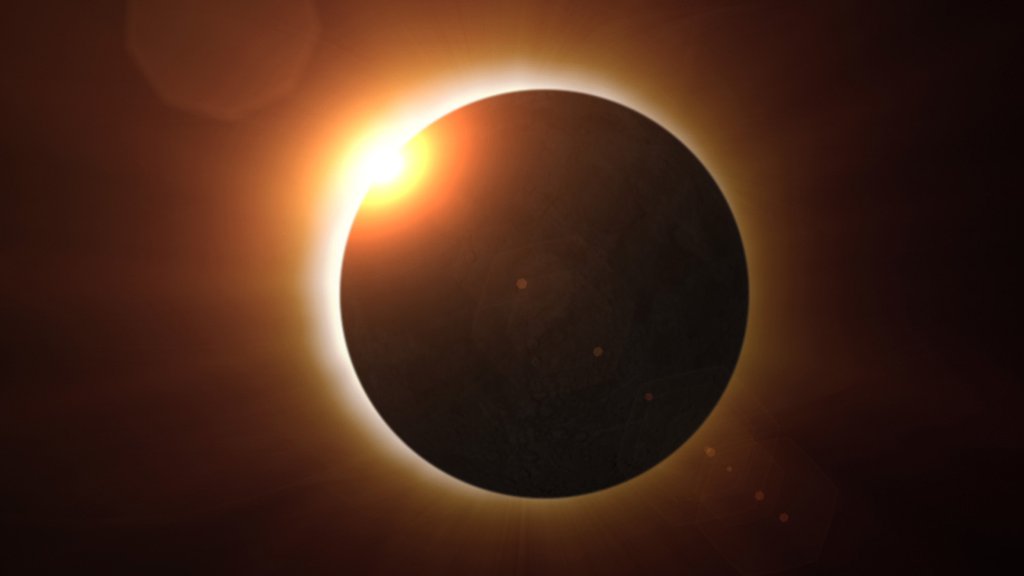 This illustration depicts a rare alignment of the Sun and Moon casting a shadow on Earth. Credits: NASA |

NASA TV will carry the Aug. 21 solar eclipse live from unique vantage points on the ground, from aircraft and from spacecraft, including the International Space Station.

On Monday, Aug. 21, all of North America will be treated to an eclipse of the Sun, and NASA Television will carry it live from coast to coast from unique vantage points on the ground and from aircraft and spacecraft, including the International Space Station. Coverage will be featured during the live four-hour broadcast Eclipse Across America: Through the Eyes of NASA.

Programming begins at 9 a.m. PDT (noon EDT) with a preview show hosted from Charleston, South Carolina. The main show begins at 10 a.m. PDT (1 p.m. EDT) and will cover the path of totality the eclipse will take across the United States, from Oregon to South Carolina. The program will feature views from NASA research aircraft, high-altitude balloons, satellites and specially-modified telescopes. It also will include live reports from Charleston, as well as from Salem, Oregon; Idaho Falls, Idaho; Beatrice, Nebraska; Jefferson City, Missouri; Carbondale, Illinois; Hopkinsville, Kentucky; and Clarksville, Tennessee.

The Toshiba Vision screen in New York's Times Square will broadcast the program live in its entirety to give the public a big-screen view of the eclipse. Viewers in Times Square can listen to NASA coverage while observing it on the big screen by downloading the NASA app or going to https://www.nasa.gov/eclipselive.

Catch NASA's live coverage using any of the following:

All content and times are subject to change in real-time and without notice.

For more details and a broadcast timeline, visit:

In addition to the NASA TV broadcast, live video streams from locations across the country will be available at:

All imagery and videos are in the public domain and can be used with the proper credit. For more information, please see NASA's Media Usage Guidelines at:

https://www.jpl.nasa.gov/edu/news/2017/8/10/get-students-excited-about-science-during-this-months-total-solar-eclipse/
Eclipse 2017 Lessons, Activities and Resources
› Check it out