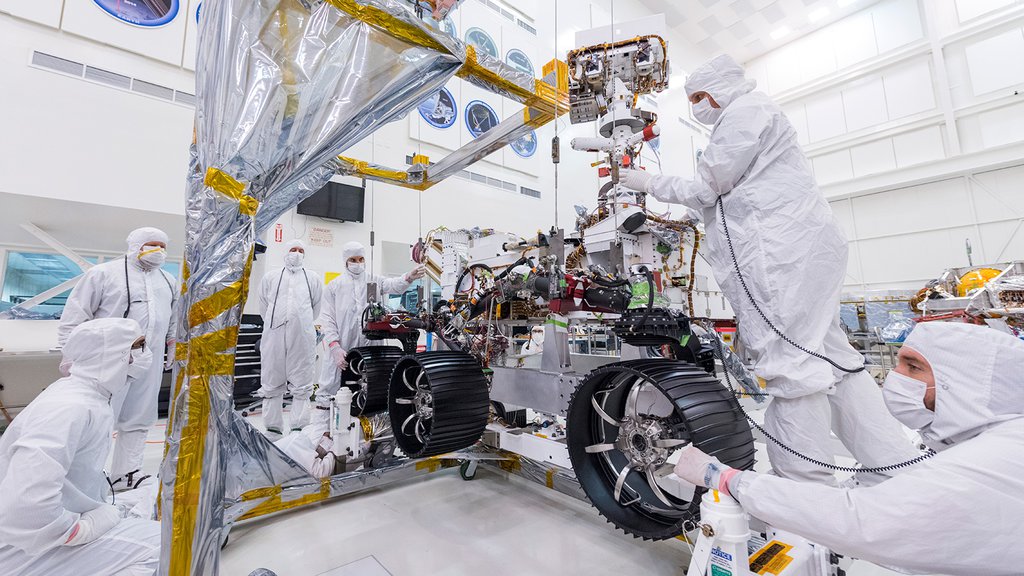 In this image, taken on June 13, 2019, engineers at JPL install the starboard legs and wheels - otherwise known as the mobility suspension - on the Mars 2020 rover.› Full image and caption
Credit: NASA/JPL-Caltech 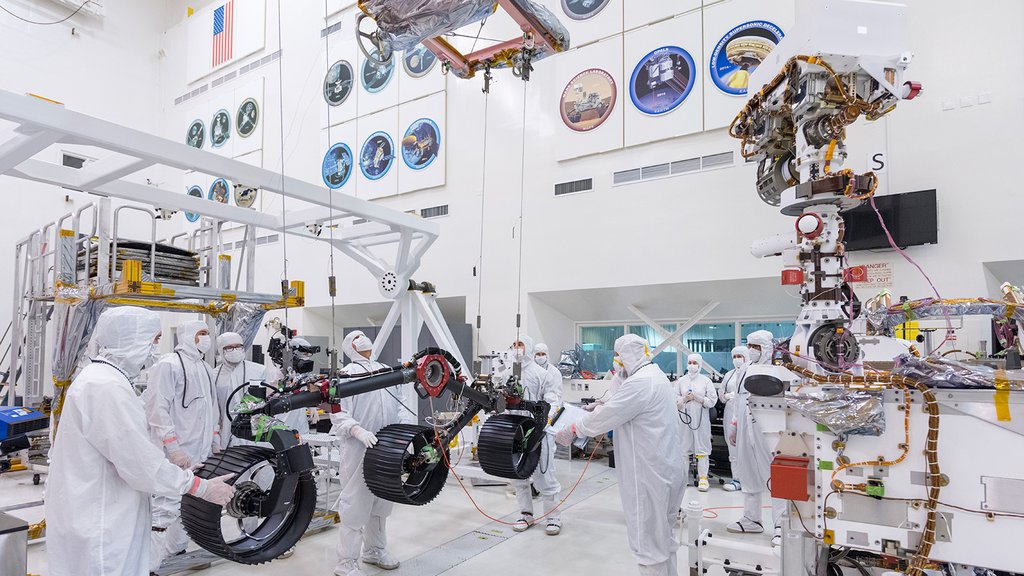 In this image, taken on June 13, 2019, engineers prepare the starboard legs and wheels - otherwise known as the mobility suspension - for integration onto NASA's Mars 2020 rover.› Full image and caption
Credit: NASA/JPL-Caltech

With the mobility suspension in place, the rover not only looks more like a rover but has many of its 'big-ticket items' installed.

In this image, taken on June 13, 2019, engineers at NASA's Jet Propulsion Laboratory in Pasadena, California, install the starboard legs and wheels - otherwise known as the mobility suspension - on the Mars 2020 rover. They installed the port suspension later that day.

"Now that's a Mars rover," said David Gruel, the Mars 2020 assembly, test, and launch operations manager at JPL. "With the suspension on, not only does it look like a rover, but we have almost all our big-ticket items for integration in our rearview mirror - if our rover had one."

Within the next few weeks, the team expects to install the vehicle's robotic arm, the mast-mounted SuperCam instrument and the Sample Caching System, which includes 17 separate motors and will collect samples of Martian rock and soil that will be returned to Earth by a future mission.

Both of the rover's legs (the starboard leg's black tubing can be seen above the wheels) are composed of titanium tubing formed with the same process used to make high-end bicycle frames. The wheels in this picture are engineering models and will not make the trip to Mars. They will be swapped out for flight models of the wheels sometime next year.

Made of aluminum, each of the six wheels (each 20.7 inches, or 52.5 centimeters, in diameter) features 48 grousers, or cleats, machined into its surface to provide excellent traction both in soft sand and on hard rocks. Every wheel has its own motor. The two front and two rear wheels also have individual steering motors that enable the vehicle to turn a full 360 degrees in place.

When driving over uneven terrain, the suspension system - called a "rocker-bogie" system due to its multiple pivot points and struts -maintains a relatively constant weight on each wheel and minimizes rover tilt for stability. Rover drivers avoid terrain that would cause a tilt of more than 30 degrees, but even so, the rover can withstand a 45-degree tilt in any direction without tipping over. With its suspension, the rover can also roll over rocks and other obstacles as well as through depressions the size of its wheels.