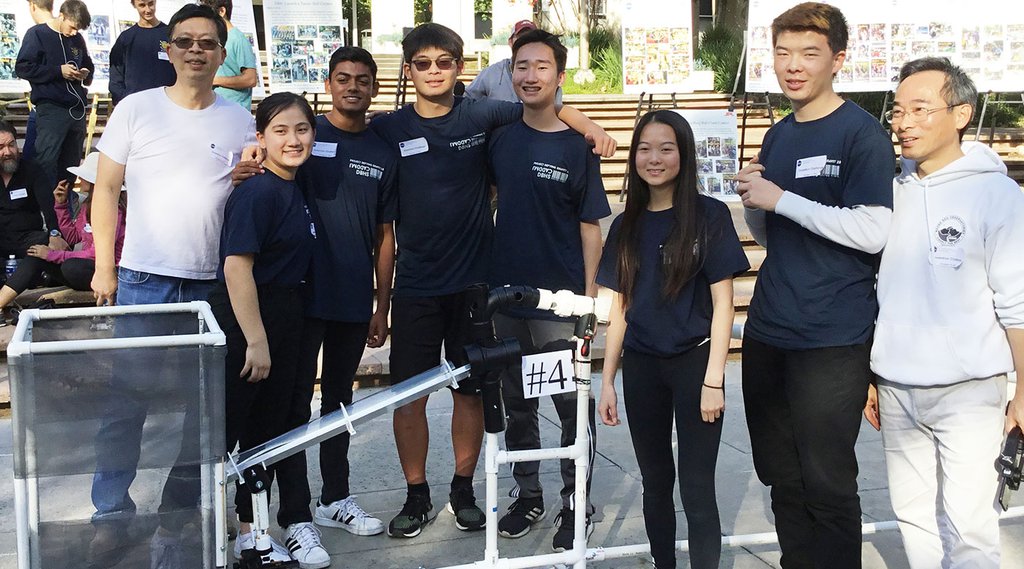 The Defying Gravity team from Diamond Bar High School gathers beside the creation that enabled them to win this year's JPL Invention Challenge after going into double overtime.
Credit: NASA/JPL-Caltech 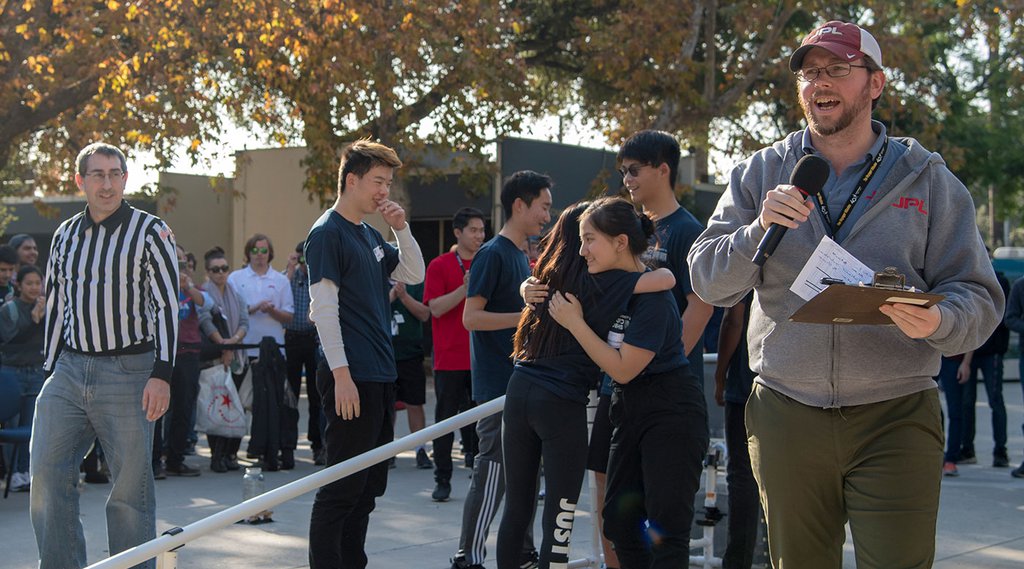 The competition was fierce and the Ping-Pong balls were plentiful at the annual contest, which tests the ingenuity of future engineers.

There was hushed anticipation as teams went into double overtime at the Invention Challenge, held at NASA's Jet Propulsion Laboratory in Pasadena, California. The volunteer-run contest brings middle- and high-school students from all over the world to compete with homemade inventions that solve a tricky engineering challenge.

The 2019 theme, "Ping-Pong Ball Run," challenged teams to create a machine that could move 10 Ping-Pong balls into a jar 16 feet (5 meters) away in under 60 seconds. Speed and precision were key, and the stakes were high as the challenge came down to two tie-breaking contests for the first time in its 22-year run.

The team called Defying Gravity, from Diamond Bar High School, finished first after three rounds of perfect scores. Their invention used a blower to push the Ping-Pong balls through a series of PVC pipes, before relying on gravity to drop each ball into the jar from the 6-inch (15-centimeter) required height. The inventions could not touch the jar at any point.

The 28 student teams came largely from local schools that qualified in regional rounds, but a handful of teams came from as far away as Ethiopia and Germany.

When asked what set her team apart, Megan Ho, Defying Gravity's leader, had a ready answer: "Work together, make sure everyone's on top of it, and always believe, believe, believe. Because while we didn't place first in the regionals, we made sure to practice and we kept practicing over the next few weeks. And we were able to get it to where we have it now."

After two hours of competition, six teams had a perfect score. The contest went into a tie-breaking round that asked each team to catch 15 balls in 60 seconds. Most of the final teams used air blowers and PVC pipes, though one team rolled the balls down a chute. When three teams emerged with a perfect score, they competed one last time to land 20 balls in 60 seconds.

To inspire students about the joys of STEM careers, JPL engineers competed as well while being separately scored. Students were audibly impressed by some of the JPL creations, particularly one that shot balls into the air before they landed in the jar.

JPL mechanical engineer Paul MacNeal started the Invention Challenge in 1998 to instill in students a passion for engineering and give them a glimpse of how JPL teams work together to invent new products. Over the years, he's hosted more than 9,000 student competitors, some of whom have become JPL employees themselves. MacNeal said this year brought some really good teams.

"Obviously it's a passion to see the kids having fun, and I think they realize that in fact they're solving engineering problems," said MacNeal. "They're our next generation of engineers."