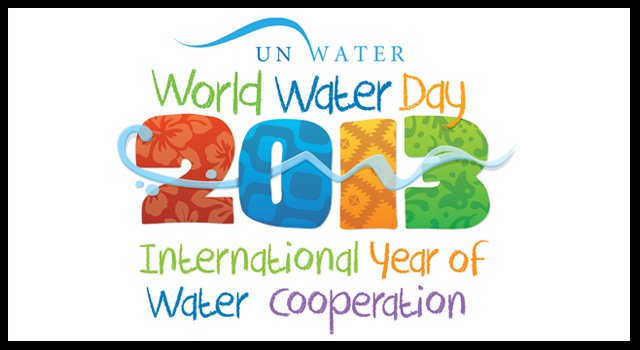 World Water Day is held annually on March 22 as a means of focusing attention on the importance of freshwater and advocating for the sustainable management of freshwater resources. NASA scientists and missions study Earth's water and provide data used by decision makers to help address critical water resource issues.
Credit: UN-Water

"We forget that the water cycle and the life cycle are one."
-- Jacques Cousteau

Water. Beautiful. Ever-changing. Life-giving. It envelops us, creates us, nurtures us, defines us, and yet can destroy us in an instant. This chemical compound -- two parts hydrogen, one part oxygen -- that we take for granted as plentiful, is actually remarkably scarce in its freshwater form. Less than three percent of Earth's water is freshwater, and more than two-thirds of that is locked up in glaciers and icecaps and therefore unavailable for drinking or agriculture. Within our solar system, water is even more scarce. And while NASA continues its quest to "follow the water" on Mars, NASA Jet Propulsion Laboratory Earth scientists and many of its Earth missions are busy studying our Water World and the complex interactions between Earth's water and its atmosphere, land and living organisms that make up our dynamic Earth system.

Each year on March 22, the member states of the United Nations observe World Water Day to focus attention on the importance of freshwater and to advocate for the sustainable management of Earth's precious freshwater resources. In December 2010, the United Nations General Assembly declared 2013 as the United Nations International Year of Water Cooperation. The objective of the year is to raise awareness of the potential for, and value of increased cooperation in relation to water.

We asked several JPL scientists to reflect on World Water Day and the importance of studying Earth's water.

"We are now able to see from space all parts of the water cycle on land -- rain and snow, evapotranspiration, soil moisture and deep groundwater, and NASA has another satellite mission on its way to detect river runoff: Surface Water and Ocean Topography, or SWOT. We're combining all these 'eyes on Earth' to make better predictions of water resources, droughts and floods."
-- Josh Fisher, JPL research scientist

"Probing aquifers with NASA airborne radar can help scientists better understand Earth's fossil aquifer systems. The approximate number, occurrence and distribution of those systems remain largely unknown. Much of the evidence for climate change in Earth's deserts lies beneath the surface and is reflected in its groundwater. By mapping desert aquifers with this technology, we can detect layers deposited by ancient geological processes and trace back paleoclimatic conditions that existed thousands of years ago, when many of today's deserts were wet.

"Since 2002, NASA's twin Gravity Recovery and Climate Experiment (GRACE) satellites have been monitoring large-scale groundwater depletion all over the globe. In northwest India, the Middle East, and also close to home in California's Central Valley aquifer, a significant fraction of the water needed to farm comes from groundwater. With GRACE, we have a tool that allows us to very accurately detect where and how much water is pumped from deep below -- unfortunately, often at unsustainable rates. For example, during the 2006 to 2010 California drought, the equivalent volume of an entire Lake Mead was extracted from the Central Valley Aquifer!"
-- Felix Landerer, JPL research scientist

"In Colombia, the country where I was born, it rained constantly for more than a year. At the same time, the United States, where I now live, was experiencing extreme droughts. The movement of water is global, giving to some what it takes from others. As Earth's climate changes, changes in precipitation and water storage will change the way we live. We need to understand how, and how we can adapt."
-- Ernesto Rodriguez, QuikScat project scientist; ISS-RapidScat principal investigator; mission design lead, Surface Water and Ocean Topography Mission

"More than 90 percent of the water vapor traveling from the tropical oceans to Earth's mid-latitudes is contained in narrow channels in the lower atmosphere called 'atmospheric rivers,' where the amount of water transported is comparable to the largest rivers on Earth. In our studies of California's Sierra Nevada Mountains, we found that snowfall produced by atmospheric rivers accounts for, on average, nearly 50 percent of the total water storage in the seasonal snowpack. However, we also found the amount of snow deposited during atmospheric river events is sensitive to air temperature changes on the order of a few degrees -- that is, similar to future projections of regional climate warming. This is one example of how vulnerable our natural water system could be, and of the importance of water cooperation."
-- Bin Guan, JPL research scientist

"Water, water everywhere, but ... almost none of it is for drinking. Why? On Earth, more than 97 percent of our precious water is in the ocean and is salty. Even though we can't drink our oceans, they have provided the unique crucible where life developed and thrived, and our oceans are the great buffer that provides our 'near-perfect' climate. But in the past century, the oceans are warming, rising and becoming more acidic. Without consideration for the consequences, humankind is upsetting the climate that has sustained our civilizations for millennia. We are behaving thoughtlessly, foolishly and dangerously. If we abuse the oceans, we put all life on Earth in peril. On this World Water Day, it's imperative that each of us pledges to handle the oceans with care."
-- Bill Patzert, JPL climatologist

"As exemplified by NASA and JPL's remarkable achievements in the search for water on Mars, we are using this world-class science and engineering expertise to measure Earth's freshwater reservoirs and fluxes. During this decade, we will see come to fruition the capabilities to monitor nearly every component of Earth's freshwater -- from the snow and ice at the poles and in our mountains to the groundwater deep beneath our feet, and all that lies between, such as water vapor, clouds and precipitation in the atmosphere and stream flow and soil moisture on the ground. As the demand for this precious resource increase with population growth and societal and ecosystem vulnerabilities change and/or grow in conjunction with climate change, these capabilities will become vital to maintaining our thriving society."
-- Duane Waliser, JPL chief Earth scientist

"When the well is dry, we know the worth of water."
-- Benjamin Franklin

"On a warming planet, the shifting water resources will cast a significant impact on our society. The steady source of freshwater from the mountaintops that has fostered human civilization for thousands of years has begun changing rapidly. We do not even have an adequate inventory of Earth's lakes. Only 15 percent of the lakes are measurable from space. Millions of small lakes have not yet been mapped and monitored. In addition, existing stream gauges cover only very large river basins, yet we do not have adequate knowledge of the river flow (or its discharge) in most of the river basins that sustain human needs.

"The Surface Water and Ocean Topography (SWOT) satellite mission planned for launch in 2020 -- jointly developed and managed by NASA, the French Space Agency (CNES) and the Canadian Space Agency -- will make measurements of the inventory of lakes and the discharge of rivers that are key to understanding the global water cycle on land; studying the dynamics of floodplains and wetlands, which have important impact on flood control and the balance of ecosystems; and providing a global assessment of water resources, including transboundary rivers, lake and reservoir storage and river dynamics."
-- Lee-Lueng Fu, JPL senior research scientist/Surface Water and Ocean Topography mission project scientist

Several of the new NASA JPL Earth satellite missions launching in 2014 and early 2015 will "follow the water" on Earth, among them:
- ISS-RapidScat, which will measure ocean surface wind speed and direction and help improve weather forecasts, including hurricane monitoring.
- Jason-3, which will extend the timeline of ocean surface topography measurements begun by the Topex/Poseidon, Jason-1 and Jason-2 satellites, making highly detailed measurements of sea level on Earth to gain insight into ocean circulation and climate change.
- Soil Moisture Active Passive (SMAP), which will measure how much water is in the top layer of Earth's soil. Among the mission's many benefits, it will help us better understand and manage water resources; better understand Earth's terrestrial water, carbon and energy cycles; and improve flood predictions and drought monitoring.