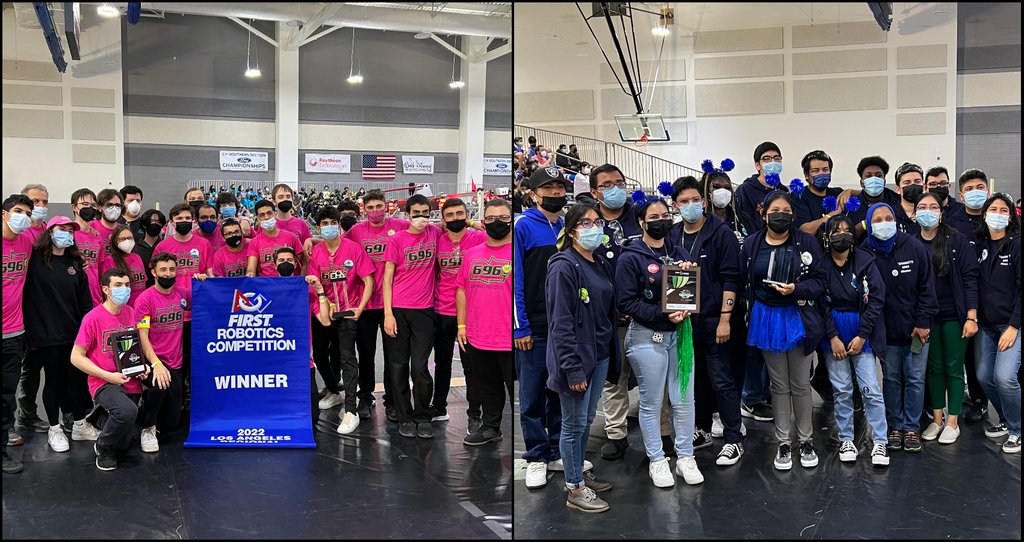 From left: Team 696, aka the “Circuit Breakers,” and Team 6904, the “TeraWatts,” were among seven JPL-sponsored teams that competed in the Los Angeles Regional FIRST Robotics Competition April 1-3, 2022. The Circuit Breakers ranked first in the competition and were on the finals-winning team alliance. 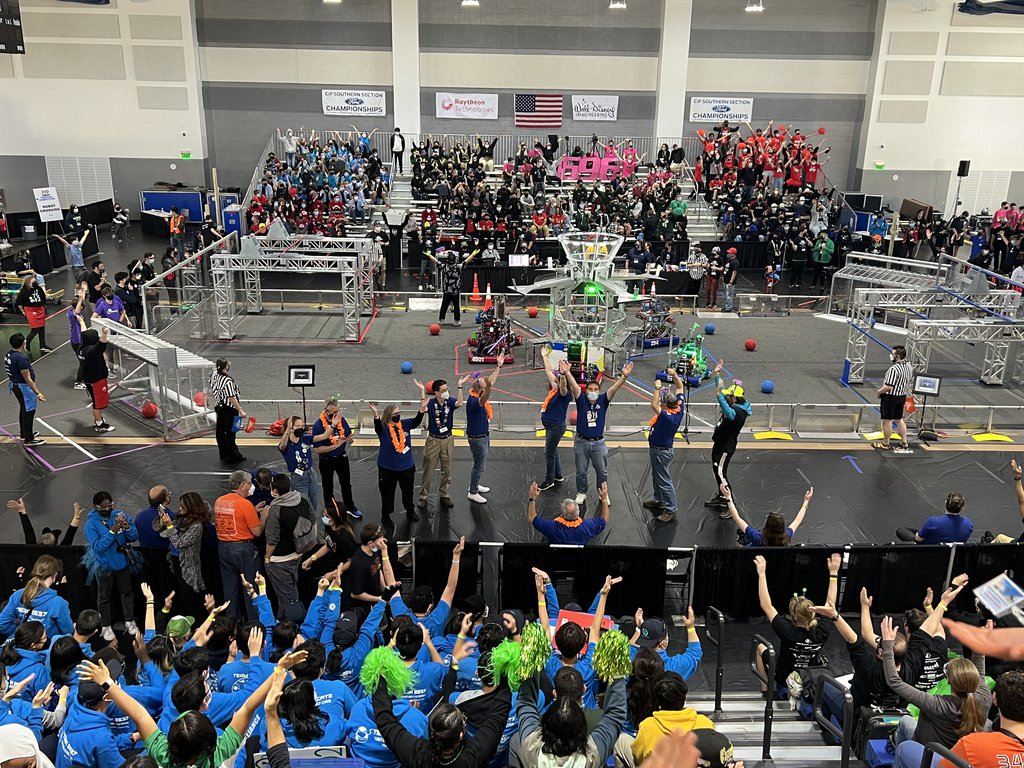 Judges, seen in navy blue at the edge of the playing field, lead students teams in a singalong of the Village People’s “YMCA” before the final playoff rounds at the 2022 Los Angeles Regional FIRST Robotics Competition.

The regional FIRST Robotics Competition brings together students from diverse backgrounds to solve engineering problems – and shape their own futures.

After 12 frantic weeks building 125-pound (57-kilogram) robots and two days of fast-paced competition with dozens of similar machines, six teams of Southern California high schoolers have triumphed. Now those teams, including one mentored and sponsored by NASA’s Jet Propulsion Laboratory, are headed to an international championship next month in Houston.

Held at the Da Vinci Schools’ campus in El Segundo over the weekend, the annual Los Angeles Regional FIRST Robotics Competition attracted 42 teams and more than 1,400 students. Even with spectators prohibited due to the pandemic, the venue was full of energy, including color-coordinated team outfits and matching pom-poms.

The event – one of many under the umbrella of the nonprofit FIRST (For Inspiration and Recognition of Science and Technology) – aims to encourage students to develop math, engineering, and team-management skills. Teams received guidelines for building their robots in early January but had a lot of creative freedom in designing their machines. In this year’s competition, two alliances of three teams each competed against one another by trying to shoot “cargo balls” into two stacked baskets or to play defense. For extra points, robots could grab onto and hoist themselves up a set of overhanging rungs in opposite corners of the playing field.

JPL-sponsored Team 696, aka the “Circuit Breakers” from Clark Magnet High in Glendale, ranked first in the competition, won the Excellence in Engineering award, and was on the finals-winning alliance. The team’s robot’s impressive climbing mechanism was dubbed the “Ferris wheel of doom,” said Carlos Gross Jones, a JPL electrical systems engineer who mentors the team. 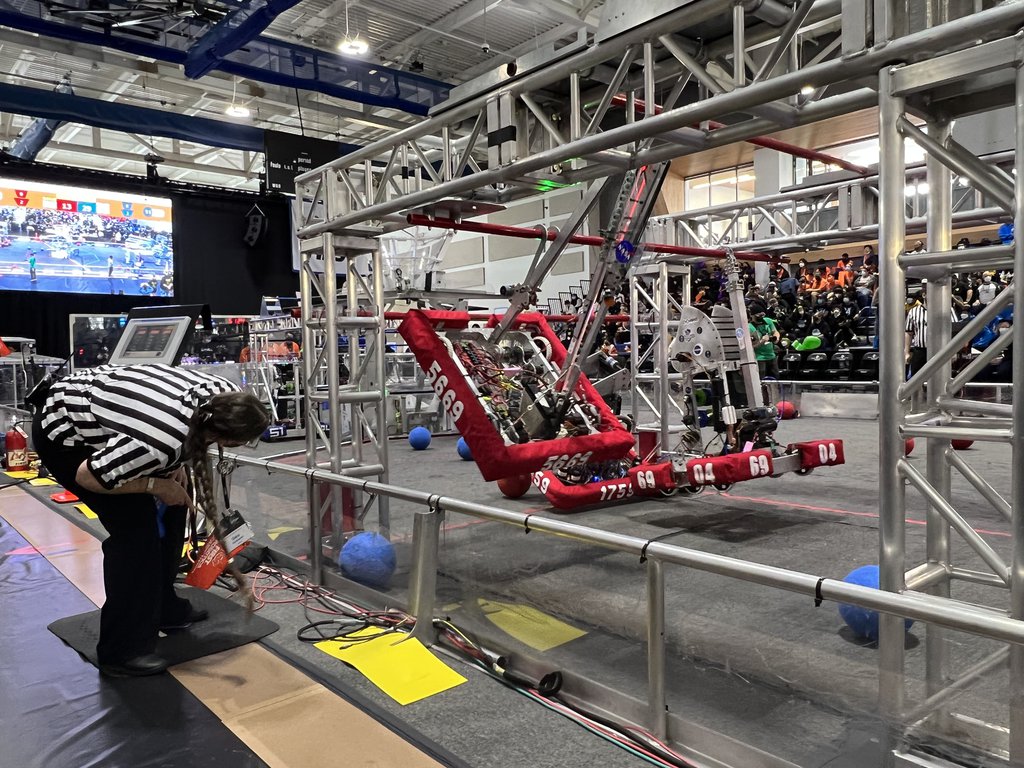 A referee at the 2022 Los Angeles Regional FIRST Robotics Competition examines robots that have managed to climb the rungs of the overhead bars in a corner of the playing field, earning them extra points.

Mentoring for the Future

Before the competition on Sunday, JPL’s Robert Hogg – a longtime team mentor who became a referee and judge – addressed the students crowded onto bleachers in the campus gym. “If you continue the trajectory you’re on and the work that you’re doing, and you work hard at it, somebody in this building could be one of those first people to set foot on Mars,” said Hogg, who’s deputy mission manager for NASA’s Perseverance rover mission, which JPL manages.

Many former participants become mentors, and some end up working at JPL and other NASA centers. Hogg and mentors from JPL said seeing students go on to successful careers is the best reward for long hours spent volunteering with FIRST teams.

Ashley Curiel, a mechanical engineer at JPL, got hooked on FIRST when she attended a competition a few years ago. To become a mentor, she sought out a team that didn’t already have support from JPL: Team 6904, the “TeraWatts,” with students from Jordan High and Animo Pat Brown Charter High in the South Los Angeles area. A first-generation immigrant from Mexico, Curiel said mentoring has meant “helping the kids see their full potential – that they are capable of so many things, regardless of preconceived notions because of where they’re from or the color of their skin.”

The TeraWatts’ lead mentor and founder, former Jordan High chemistry teacher Fatima Iqbal-Zubair, said she wanted to help get historically underrepresented communities into STEM careers – and sculpt minds that can help solve Earth’s problems. “We may be missing the next Einstein or the next Mae Jemison if we don’t do that,” she added.

Students have to design, build, and program robots, but there’s much more involved. They also have to strategize, scout talent, build alliances, fundraise, develop branding, and learn to run teams like a business.

Jordan High junior Heaven Watson said she gained communication, leadership, and networking skills since joining the TeraWatts last season. Now she’s a project manager for the team and the host of its podcast. “It’s more than us; it’s a community,” Heaven added. “It’s building inspiration, trying to impact other people.”

The TeraWatts, who were featured in the recent documentary “More Than Robots,” didn’t make it to the playoffs. But they were given the Judges’ Award, bestowed on a team whose unique efforts merit special recognition.

Attending the championship from this competition will be Team 696 and its alliance partners: Team 3476 (“Code Orange”) from Irvine and Team 599 (the “Robodox”) from Granada Hills Charter High in L.A., which won a wildcard entry. Team 8898 (“Royal Rebels Engineering”) from Rosary Academy in Fullerton also earned a wildcard slot. Two other teams are eligible go to Houston because of awards they received: Team 2637 (“Phantom Catz”) from Palos Verdes Peninsula High and Team 3749 (“Team Optix”) from Del Norte High School in San Diego.

For detailed scores and rankings, visit: