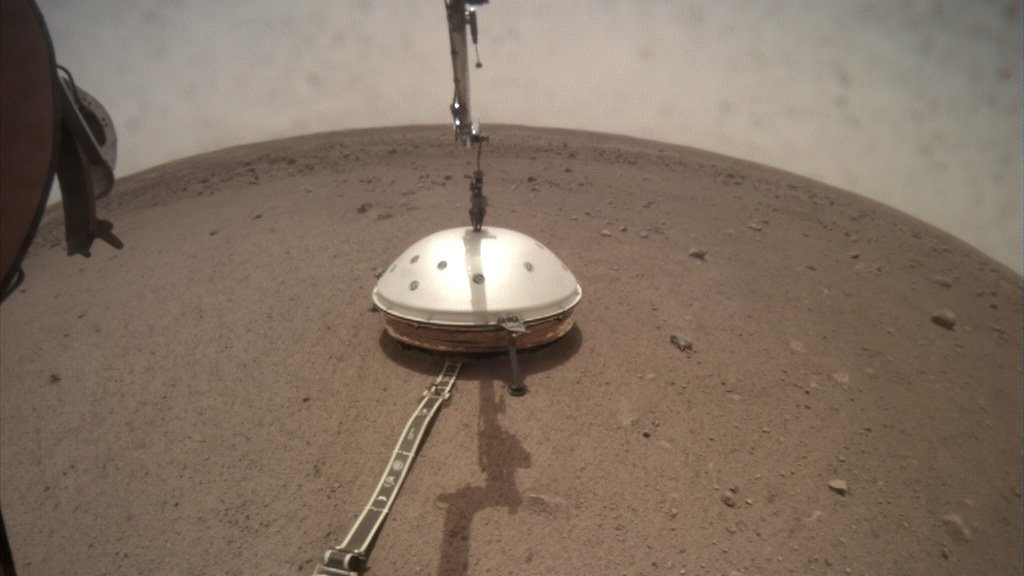 NASA's InSight lander deployed its Wind and Thermal Shield on Feb. 2 (Sol 66). The shield covers InSight's seismometer, which was set down onto the Martian surface on Dec. 19.› Full image and caption
Credit: NASA/JPL-Caltech

A domed shield has been set over one of InSight's primary science instruments, protecting it from Mars' wind and temperature changes.

For the past several weeks, NASA's InSight lander has been making adjustments to the seismometer it set on the Martian surface on Dec. 19. Now it's reached another milestone by placing a domed shield over the seismometer to help the instrument collect accurate data. The seismometer will give scientists their first look at the deep interior of the Red Planet, helping them understand how it and other rocky planets are formed.

The Wind and Thermal Shield helps protect the supersensitive instrument from being shaken by passing winds, which can add "noise" to its data. The dome's aerodynamic shape causes the wind to press it toward the planet's surface, ensuring it won't flip over. A skirt made of chain mail and thermal blankets rings the bottom, allowing it to settle easily over any rocks, though there are few at InSight's location.

An even bigger concern for InSight's seismometer - called the Seismic Experiment for Interior Structure (SEIS) - is temperature change, which can expand and contract metal springs and other parts inside the seismometer. Where InSight landed, temperatures fluctuate by about 170 degrees Fahrenheit (94 degrees Celsius) over the course of a Martian day, or sol.

"Temperature is one of our biggest bugaboos," said InSight Principal Investigator Bruce Banerdt of NASA's Jet Propulsion Laboratory in Pasadena, California. JPL leads the InSight mission and built the Wind and Thermal Shield. "Think of the shield as putting a cozy over your food on a table. It keeps SEIS from warming up too much during the day or cooling off too much at night. In general, we want to keep the temperature as steady as possible."

On Earth, seismometers are often buried about four feet (1.2 meters) underground in vaults, which helps keep the temperature stable. InSight can't build a vault on Mars, so the mission relies on several measures to protect its seismometer. The shield is the first line of defense.

A second line of defense is SEIS itself, which is specially engineered to correct for wild temperature swings on the Martian surface. The seismometer was built so that as some parts expand and contract, others do so in the opposite direction to partially cancel those effects. Additionally, the instrument is vacuum-sealed in a titanium sphere that insulates its sensitive insides and reduces the influence of temperature.

But even that isn't quite enough. The sphere is enclosed within yet another insulating container - a copper-colored hexagonal box visible during SEIS's deployment. The walls of this box are honeycombed with cells that trap air and keep it from moving. Mars provides an excellent gas for this insulation: Its thin atmosphere is primarily composed of carbon dioxide, which at low pressure is especially slow to conduct heat.

With these three insulating barriers, SEIS is well-protected from thermal "noise" seeping into the data and masking the seismic waves that InSight's team wants to study. Finally, most additional interference from the Martian environment can be detected by InSight's weather sensors, then filtered out by mission scientists.

With the seismometer on the ground and covered, InSight's team is readying for its next step: deploying the heat flow probe, called the Heat Flow and Physical Properties Package (HP3), onto the Martian surface. That's expected to happen next week.