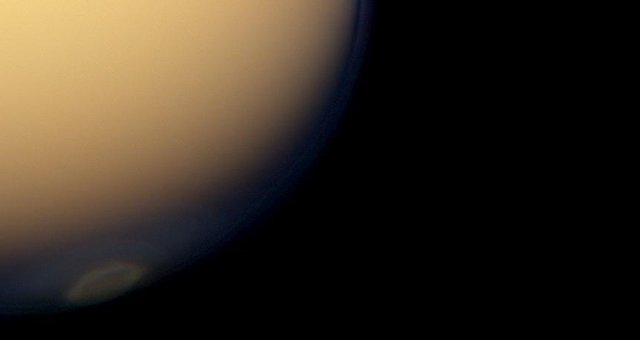 NASA's Cassini finds a kind of cloud only previously seen at the moon's north pole.

An ice cloud taking shape over Titan's south pole is the latest sign that the change of seasons is setting off a cascade of radical changes in the atmosphere of Saturn's largest moon. Made from an unknown ice, this type of cloud has long hung over Titan's north pole, where it is now fading, according to observations made by the composite infrared spectrometer (CIRS) on NASA's Cassini spacecraft.

"We associate this particular kind of ice cloud with winter weather on Titan, and this is the first time we have detected it anywhere but the north pole," said the study's lead author, Donald E. Jennings, a CIRS Co-Investigator at NASA's Goddard Space Flight Center in Greenbelt, Md.

The southern ice cloud, which shows up in the far infrared part of the light spectrum, is evidence that an important pattern of global air circulation on Titan has reversed direction. When Cassini first observed the circulation pattern, warm air from the southern hemisphere was rising high in the atmosphere and was transported to the cold north pole. There, the air cooled and sank down to lower layers of the atmosphere and formed ice clouds. A similar pattern, called a Hadley cell, carries warm, moist air from Earth's tropics to the cooler middle latitudes.

Based on modeling, scientists had long predicted a reversal of this circulation once Titan's north pole began to warm and its south pole began to cool. The official transition from winter to spring at Titan's north pole occurred in August 2009. But because each of the moon's seasons lasts about seven-and-a-half Earth years, researchers still did not know exactly when this reversal would happen or how long it would take.

The first signs of the reversal came in data acquired in early 2012, which came shortly after the start of southern fall on Titan, when Cassini images and visual and infrared mapping spectrometer data revealed the presence of a high-altitude "haze hood" and a swirling polar vortex at the south pole. Both features have long been associated with the cold north pole. Later, Cassini scientists reported that infrared observations of Titan's winds and temperatures made by CIRS had provided definitive evidence of air sinking, rather than upwelling, at the south pole. By looking back through the data, the team narrowed down the change in circulation to within six months of the 2009 equinox.

Despite the new activity at the south pole, the southern ice cloud had not appeared yet. CIRS didn't detect it until about July 2012, a few months after the haze and vortex were spotted in the south, according to the study published in Astrophysical Journal Letters in December 2012.

"This lag makes sense because first the new circulation pattern has to bring loads and loads of gases to the south pole. Then, the air has to sink. The ices have to condense. And the pole has to be under enough shadow to protect the vapors that condense to form those ices," said Carrie Anderson, a CIRS team member and Cassini participating scientist at Goddard.

At first blush, the southern ice cloud seems to be building rapidly. The northern ice cloud, on the other hand, was present when Cassini first arrived and has been slowly fading the entire time the spacecraft has been observing it.

So far, the identity of the ice in these clouds has eluded scientists, though they have ruled out simple chemicals, such as methane, ethane and hydrogen cyanide, which are typically associated with Titan. One possibility is that "species X," as some team members call the ice, could be a mixture of organic compounds.

"What's happening at Titan's poles has some analogy to Earth and to our ozone holes," said the CIRS Principal Investigator, Goddard's F. Michael Flasar. "And on Earth, the ices in the high polar clouds aren't just window dressing: They play a role in releasing the chlorine that destroys ozone. How this affects Titan chemistry is still unknown. So it's important to learn as much as we can about this phenomenon, wherever we find it."

The Cassini-Huygens mission is a cooperative project of NASA, the European Space Agency, and the Italian Space Agency. The mission is managed by the Jet Propulsion Laboratory for NASA's Science Mission Directorate, Washington. The CIRS team is based at NASA's Goddard Space Flight Center in Greenbelt, Md., where the instrument was built. JPL is a division of the California Institute of Technology.