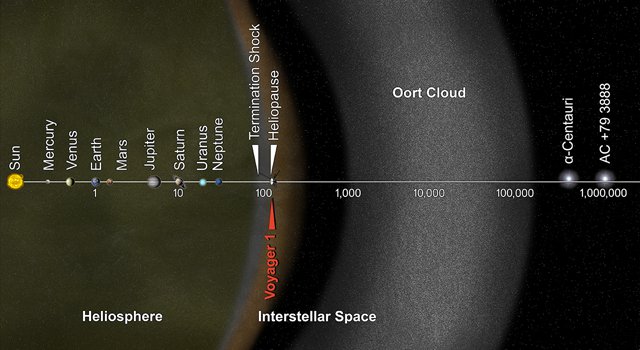 You Are Here, Voyager: This artist's concept puts huge solar system distances in perspective. The scale bar is measured in astronomical units (AU), with each set distance beyond 1 AU representing 10 times the previous distance. Each AU is equal to the distance from the sun to the Earth. It took from 1977 to 2013 for Voyager 1 to reach the edge of interstellar space.› Full image and caption
Credit: NASA/JPL-Caltech 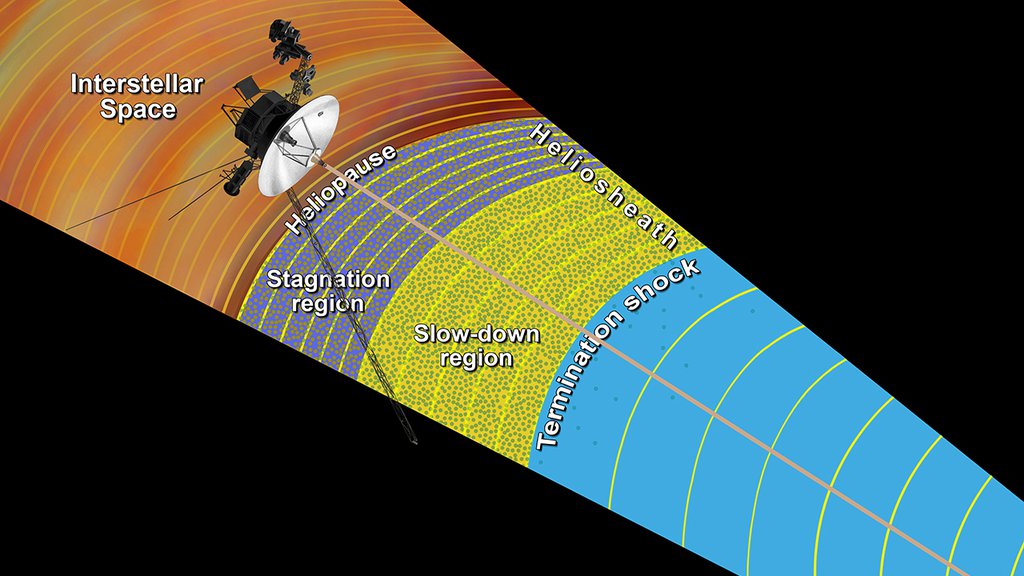 Layers of Intrigue: This illustration shows the outer layers of our solar bubble, or heliosphere, and the interstellar space that Voyager 1 is currently investigating.› Full image and caption
Credit: NASA/JPL-Caltech

Why the debate about if and when Voyager 1 reached interstellar space is so complicated.

Whether and when NASA's Voyager 1 spacecraft, humankind's most distant object, broke through to interstellar space, the space between stars, has been a thorny issue. For the last year, claims have surfaced every few months that Voyager 1 has "left our solar system." Why has the Voyager team held off from saying the craft reached interstellar space until now?

"We have been cautious because we're dealing with one of the most important milestones in the history of exploration," said Voyager Project Scientist Ed Stone of the California Institute of Technology in Pasadena. "Only now do we have the data -- and the analysis -- we needed."

Basically, the team needed more data on plasma, which is ionized gas, the densest and slowest moving of charged particles in space. (The glow of neon in a storefront sign is an example of plasma.) Plasma is the most important marker that distinguishes whether Voyager 1 is inside the solar bubble, known as the heliosphere, which is inflated by plasma that streams outward from our sun, or in interstellar space and surrounded by material ejected by the explosion of nearby giant stars millions of years ago. Adding to the challenge: they didn't know how they'd be able to detect it.

"We looked for the signs predicted by the models that use the best available data, but until now we had no measurements of the plasma from Voyager 1," said Stone.

Scientific debates can take years, even decades to settle, especially when more data are needed. It took decades, for instance, for scientists to understand the idea of plate tectonics, the theory that explains the shape of Earth's continents and the structure of its sea floors. First introduced in the 1910s, continental drift and related ideas were controversial for years. A mature theory of plate tectonics didn't emerge until the 1950s and 1960s. Only after scientists gathered data showing that sea floors slowly spread out from mid-ocean ridges did they finally start accepting the theory. Most active geophysicists accepted plate tectonics by the late 1960s, though some never did.

Voyager 1 is exploring an even more unfamiliar place than our Earth's sea floors -- a place more than 11 billion miles (17 billion kilometers) away from our sun. It has been sending back so much unexpected data that the science team has been grappling with the question of how to explain all the information. None of the handful of models the Voyager team uses as blueprints have accounted for the observations about the transition between our heliosphere and the interstellar medium in detail. The team has known it might take months, or longer, to understand the data fully and draw their conclusions.

"No one has been to interstellar space before, and it's like traveling with guidebooks that are incomplete," said Stone. "Still, uncertainty is part of exploration. We wouldn't go exploring if we knew exactly what we'd find."

The two Voyager spacecraft were launched in 1977 and, between them, had visited Jupiter, Saturn, Uranus and Neptune by 1989. Voyager 1's plasma instrument, which measures the density, temperature and speed of plasma, stopped working in 1980, right after its last planetary flyby. When Voyager 1 detected the pressure of interstellar space on our heliosphere in 2004, the science team didn't have the instrument that would provide the most direct measurements of plasma. Instead, they focused on the direction of the magnetic field as a proxy for source of the plasma. Since solar plasma carries the magnetic field lines emanating from the sun and interstellar plasma carries interstellar magnetic field lines, the directions of the solar and interstellar magnetic fields were expected to differ.

Most models told the Voyager science team to expect an abrupt change in the magnetic field direction as Voyager switched from the solar magnetic field lines inside our solar bubble to those in interstellar space. The models also said to expect the levels of charged particles originating from inside the heliosphere to drop and the levels of galactic cosmic rays, which originate outside the heliosphere, to jump.

In May 2012, the number of galactic cosmic rays made its first significant jump, while some of the inside particles made their first significant dip. The pace of change quickened dramatically on July 28, 2012. After five days, the intensities returned to what they had been. This was the first taste of a new region, and at the time Voyager scientists thought the spacecraft might have briefly touched the edge of interstellar space.

By Aug. 25, when, as we now know, Voyager 1 entered this new region for good, all the lower-energy particles from inside zipped away. Some inside particles dropped by more than a factor of 1,000 compared to 2004. The levels of galactic cosmic rays jumped to the highest of the entire mission. These would be the expected changes if Voyager 1 had crossed the heliopause, which is the boundary between the heliosphere and interstellar space. However, subsequent analysis of the magnetic field data revealed that even though the magnetic field strength jumped by 60 percent at the boundary, the direction changed less than 2 degrees. This suggested that Voyager 1 had not left the solar magnetic field and had only entered a new region, still inside our solar bubble, that had been depleted of inside particles.

Then, in April 2013, scientists got another piece of the puzzle by chance. For the first eight years of exploring the heliosheath, which is the outer layer of the heliosphere, Voyager's plasma wave instrument had heard nothing. But the plasma wave science team, led by Don Gurnett and Bill Kurth at the University of Iowa, Iowa City, had observed bursts of radio waves in 1983 to 1984 and again in 1992 to 1993. They deduced these bursts were produced by the interstellar plasma when a large outburst of solar material would plow into it and cause it to oscillate. It took about 400 days for such solar outbursts to reach interstellar space, leading to an estimated distance of 117 to 177 AU (117 to 177 times the distance from the sun to the Earth) to the heliopause. They knew, though, that they would be able to observe plasma oscillations directly once Voyager 1 was surrounded by interstellar plasma.

Then on April 9, 2013, it happened: Voyager 1's plasma wave instrument picked up local plasma oscillations. Scientists think they probably stemmed from a burst of solar activity from a year before, a burst that has become known as the St. Patrick's Day Solar Storms. The oscillations increased in pitch through May 22 and indicated that Voyager was moving into an increasingly dense region of plasma. This plasma had the signatures of interstellar plasma, with a density more than 40 times that observed by Voyager 2 in the heliosheath.

Gurnett and Kurth began going through the recent data and found a fainter, lower-frequency set of oscillations from Oct. 23 to Nov. 27, 2012. When they extrapolated back, they deduced that Voyager had first encountered this dense interstellar plasma in August 2012, consistent with the sharp boundaries in the charged particle and magnetic field data on August 25.

Stone called three meetings of the Voyager team. They had to decide how to define the boundary between our solar bubble and interstellar space and how to interpret all the data Voyager 1 had been sending back. There was general agreement Voyager 1 was seeing interstellar plasma, based on the results from Gurnett and Kurth, but the sun still had influence. One persisting sign of solar influence, for example, was the detection of outside particles hitting Voyager from some directions more than others. In interstellar space, these particles would be expected to hit Voyager uniformly from all directions.

"Now that we had actual measurements of the plasma environment - by way of an unexpected outburst from the sun - we had to reconsider why there was still solar influence on the magnetic field and plasma in interstellar space," Stone said. "The path to interstellar space has been a lot more complicated than we imagined."

Stone discussed with the Voyager science group whether they thought Voyager 1 had crossed the heliopause. What should they call the region were Voyager 1 is?

"In the end, there was general agreement that Voyager 1 was indeed outside in interstellar space," Stone said. "But that location comes with some disclaimers - we're in a mixed, transitional region of interstellar space. We don't know when we'll reach interstellar space free from the influence of our solar bubble."

So, would the team say Voyager 1 has left the solar system? Not exactly - and that's part of the confusion. Since the 1960s, most scientists have defined our solar system as going out to the Oort Cloud, where the comets that swing by our sun on long timescales originate. That area is where the gravity of other stars begins to dominate that of the sun. It will take about 300 years for Voyager 1 to reach the inner edge of the Oort Cloud and possibly about 30,000 years to fly beyond it. Informally, of course, "solar system" typically means the planetary neighborhood around our sun. Because of this ambiguity, the Voyager team has lately favored talking about interstellar space, which is specifically the space between each star's realm of plasma influence.

"What we can say is Voyager 1 is bathed in matter from other stars," Stone said. "What we can't say is what exact discoveries await Voyager's continued journey. No one was able to predict all of the details that Voyager 1 has seen. So we expect more surprises."

Voyager 1, which is working with a finite power supply, has enough electrical power to keep operating the fields and particles science instruments through at least 2020, which will mark 43 years of continual operation. At that point, mission managers will have to start turning off these instruments one by one to conserve power, with the last one turning off around 2025.

Voyager 1 will continue sending engineering data for a few more years after the last science instrument is turned off, but after that it will be sailing on as a silent ambassador. In about 40,000 years, it will be closer to the star AC +79 3888 than our own sun. (AC +79 3888 is traveling toward us faster than we are traveling towards it, so while Alpha Centauri is the next closest star now, it won't be in 40,000 years.) And for the rest of time, Voyager 1 will continue orbiting around the heart of the Milky Way galaxy, with our sun but a tiny point of light among many.