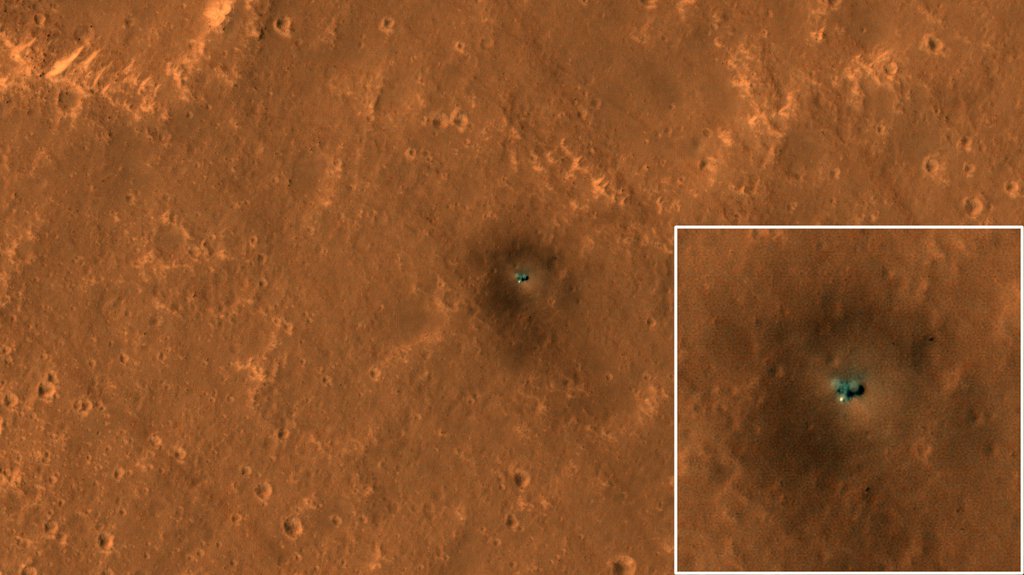 The HiRISE camera on NASA's Mars Reconnaissance Orbiter got its best view yet of the InSight lander on September 23, 2019.
Credit: NASA/JPL-Caltech/University of Arizona

This animation shows the position of NASA's Curiosity rover as it journeyed through "the clay-bearing unit" on Mars between May 31 and July 20, 2019. The HiRISE camera on NASA's Mars Reconnaissance Orbiter took both images.
Credit: NASA/JPL-Caltech/University of Arizona.

New images taken from space offer the clearest orbital glimpse yet of InSight as well as a view of Curiosity rolling along.

HiRISE has been monitoring InSight's landing site in the Elysium Planitia region of the Red Planet for changes to the surface, such as dust-devil tracks. Taken on Sept. 23, 2019, at an altitude of 169 miles (272 kilometers) above the surface, the new image is NASA's best view yet of InSight from space. It clearly shows the two circular solar panels on either side of the lander body, spanning 20 feet (6 meters) from end to end.

The bright spot on the lower side of the spacecraft is the dome-shaped protective cover over InSight's seismometer. The dark halo surrounding the spacecraft resulted from retrorocket thrusters scouring the surface during landing, while dust devils created the dark streaks that run diagonally across the surface.

Several factors make this image crisper than a set of images released after InSight's November 2018 landing. For one thing, there's less dust in the air this time. Shadows are offset from the lander because this is an oblique view looking west. The lighting was also optimal for avoiding the bright reflections from the lander or its solar panels that have obscured surrounding pixels in other images. However, bright reflections are unavoidable with the seismometer cover just south of the lander because of its dome shape.

HiRISE has also been keeping tabs on NASA's Curiosity, which is roughly 373 miles (600 kilometers) from InSight, exploring a region called "the clay-bearing unit."

A GIF released today shows Curiosity as a gray speck as it traveled 1,106 feet (337 meters) from a location within the clay-bearing unit called "Woodland Bay" (top center) to "Sandside Harbour" (bottom center, near the dark sand patch) between May 31 and July 20, 2019.

Look carefully and you can even see the rover's tracks arcing to the right side of the second image.

NASA's Jet Propulsion Laboratory in Pasadena, California, manages the InSight, MRO and Curiosity missions for NASA's Science Mission Directorate in Washington. JPL is a division of Caltech. The University of Arizona in Tucson operates HiRISE, which was built by Ball Aerospace & Technologies Corp. in Boulder, Colorado. MRO was built by Lockheed Martin Space.

Find more information about InSight, Curiosity, MRO and HiRISE at: