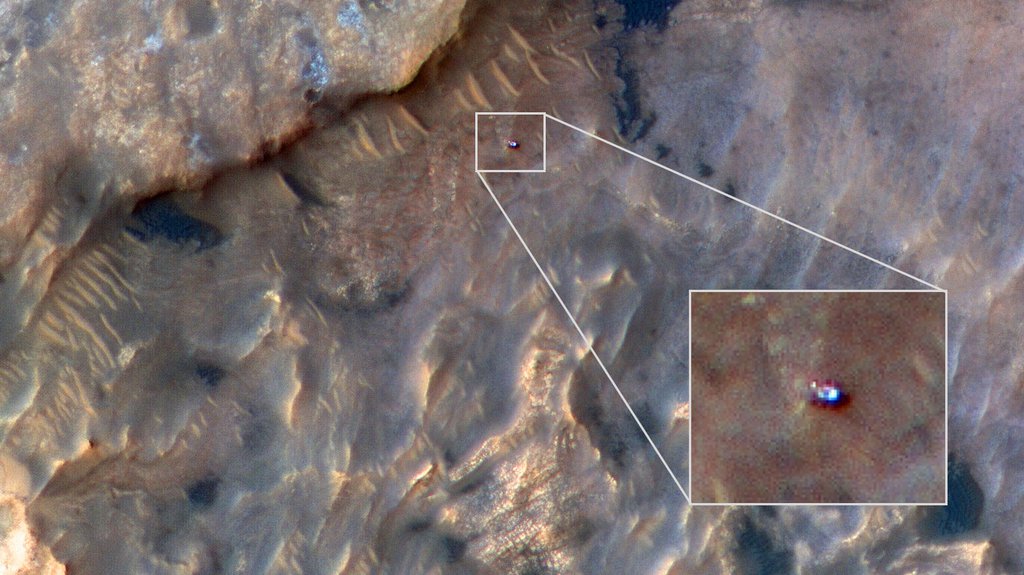 NASA's Curiosity Mars rover can be seen in this image taken from space on May 31, 2019, by the HiRISE camera aboard the Mars Reconnaissance Orbiter. In the image, Curiosity appears as a bluish speck.› Full image and caption
Credit: NASA/JPL-Caltech

A new image shows the view from space of NASA's Mars rover exploring the clay-bearing unit.

A dramatic Martian landscape can be seen in a new image taken from space, showing NASA's Curiosity rover examining a location called "Woodland Bay." It's just one of many stops the rover has made in an area referred to as the "clay-bearing unit" on the side of Mount Sharp, a 3-mile-tall (5-kilometer-tall) mountain inside of Gale Crater.

The image was taken on May 31, 2019, by the High Resolution Imaging Science Experiment (HiRISE) camera aboard NASA's Mars Reconnaissance Orbiter (MRO). In the image, Curiosity appears as a bluish speck. Vera Rubin Ridge cuts across the scene north of the rover, while a dark patch of sand lies to the northeast.

Mirror-like reflections off smooth surfaces show up as especially bright spots in HiRISE images. For the camera to see these reflections on the rover, the Sun and MRO need to be in just the right locations. This enhanced-color image of Curiosity shows three or four distinct bright spots that are likely such reflections.

The University of Arizona in Tucson operates HiRISE, which was built by Ball Aerospace & Technologies Corp. in Boulder, Colorado. JPL, a division of Caltech in Pasadena, California, manages the Mars Reconnaissance Orbiter Project for NASA's Science Mission Directorate in Washington.

Find more information about Curiosity at:

Find more information about MRO and HiRISE at: