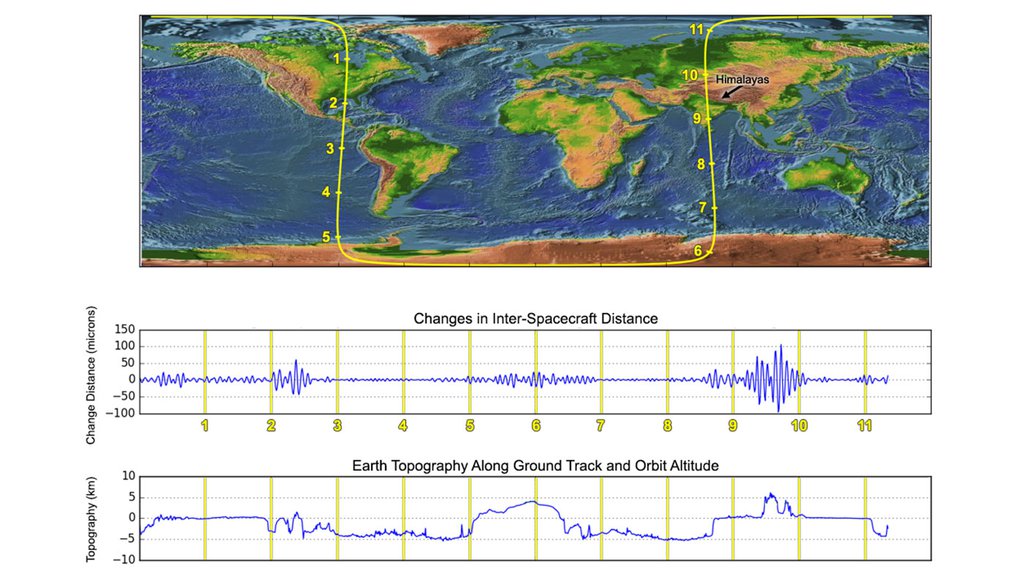 Along the satellites' ground track (top), the inter-spacecraft distance between them changes as the mass distribution underneath (i.e., from mountains, etc.) varies. The small changes measured by the Microwave Ranging Instrument (middle) agree well with topographic features along the orbit (bottom).
Credit: NASA/JPL-Caltech/GFZ

Less than three weeks after launch, the Gravity Recovery and Climate Experiment Follow-On (GRACE-FO) mission has successfully completed its first mission phase and demonstrated the performance of the precise microwave ranging system that enables its unique measurements of how mass migrates around our planet.

The twin spacecraft launched May 22 from California's Vandenberg Air Force Base. NASA and German Research Centre for Geosciences (GFZ) engineers and mission controllers at the German Space Operations Center in Oberpfaffenhofen then spent the first few days completing the mission's launch and early operations phase and moving into an 85-day in-orbit checkout period. Science operations will begin when that period has been successfully completed.

During the initial phase, the twin GRACE-FO satellites were maneuvered into their operational orbit formation approximately 137 miles (220 kilometers) apart. Spacecraft systems were powered on, checked out and found to be performing as expected. Engineers also activated both primary instruments: the accelerometers, which measure forces on the satellites other than gravity, such as atmospheric drag or solar radiation pressure; and the microwave ranging instruments, which precisely measure the distance changes between the two satellites as they orbit Earth. Variations in Earth's gravity field caused by changes in the distribution of Earth's mass on and beneath the planet's surface -- such as groundwater withdrawal and ice melt -- cause the distance between the two satellites to vary ever so slightly.

The GRACE-FO microwave ranging instruments allow distance measurements with a precision better than one micron -- less than the diameter of a blood cell, or a tenth the width of a human hair.

During any single orbit of the satellites, some of the largest gravity variations on Earth seen in the satellite ranging data are due to massive mountain ranges. To demonstrate the initial performance of GRACE-FO's microwave ranging system, the team examined its measurements of changes in the distance between the two satellites as they flew over the Himalayas. The results are shown in a figure that team members dubbed "The Himalaya Plot," which may sound like the name of a mystery movie. However, the figure's working name actually refers to the distance changes measured by the microwave ranging system as the satellites flew over the mountains. The plot's wavy lines show how the distance between the satellites varies as the satellites pass over oceans, land areas, and particularly mountains as they orbit Earth. The observed inter-satellite distance changes, which can be as large as hundreds of microns, are in good agreement with expectations. These results give the team confidence that the mission's key microwave ranging system is performing well.

By measuring even minute changes in distance between the satellites, GRACE-FO can detect the month-to-month variations in Earth's gravity field caused by the movement of mass as small as about a half-inch (1 centimeter) of water over an area of about 200 miles (320 kilometers) in diameter.

GRACE-FO data will provide unique insights into Earth's changing climate, including large-scale changes in our planet's ice sheets and glaciers; Earth system processes that define our environment, such as droughts and earthquakes; and even the impacts of some human activities, such as changes in the levels of aquifers resulting from pumping underground water for use in agriculture. GRACE-FO observations promise to provide far-reaching benefits to society.