GeoCarb: A New View of Carbon Over the Americas 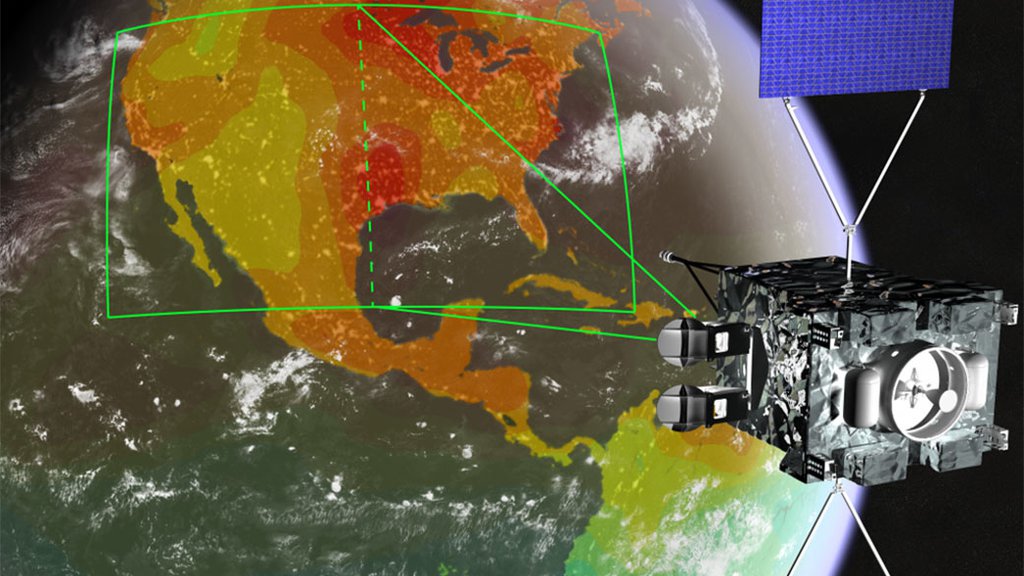 Artist's illustration of a concept for NASA's GeoCarb mission, which will map concentrations of key carbon gases above the Americas from geostationary orbit.
Credit: NASA/Lockheed Martin/University of Oklahoma

A new NASA Earth science mission in the early stages of design may achieve a transformational advance in our understanding of the global carbon cycle by mapping concentrations of key carbon gases from a new vantage point: geostationary orbit. Satellites in geostationary orbit travel at the same speed as Earth's rotation, allowing them to remain over the same place on Earth's surface at all times.

The Geostationary Carbon Observatory (GeoCarb), targeted for launch in the early 2020s, will build on the success of NASA's Orbiting Carbon Observatory-2 (OCO-2) mission by placing a similar instrument on a commercial SES-Government Solutions communications satellite flying in geostationary orbit. Its longitude will allow "wall-to-wall" observations over the Americas between 50 degrees North and South latitude -- from the southern tip of Hudson Bay to the southern tip of South America. Perched 22,236 miles (35,800 kilometers) above the Americas, GeoCarb will collect 10 million daily observations of the concentrations of carbon dioxide, methane, carbon monoxide and solar-induced fluorescence (SIF) at a spatial resolution of about 3 to 6 miles (5 to 10 kilometers).

The abundance and distribution of carbon-bearing gases in the atmosphere are determined by both the exchange of carbon between Earth's land areas, oceans and the atmosphere, and their transport by prevailing winds. These exchanges are best understood by making frequent, densely spaced observations. While satellites in sun-synchronous, polar low-Earth orbits like OCO-2 provide global coverage, they have long revisit times, large gaps in coverage, and always look at the landscape at the same time of day. Because weather affects ecosystems on timescales of days to weeks, polar orbiting satellites may miss these changes and how they interconnect with the activities of living organisms -- information that is crucial to developing better models of Earth system processes.

"GeoCarb will complement measurements by OCO-2 and other low-Earth orbiting satellites by filling in data gaps in both time and space," said Principal Investigator Berrien Moore of the University of Oklahoma in Norman. "It will be more of a regional mapping mission than a global sampling mission."

Moore said that just as geostationary weather satellites can sit and stare at storms and map them, GeoCarb will let us see how different weather patterns influence carbon dioxide and methane concentrations. "That's the power a geostationary orbit brings," he said. "Data from OCO-2 have already shown that large-scale weather patterns such as El Niño and La Niña affect the large-scale pattern of atmospheric carbon dioxide concentrations, and that's extremely important."

GeoCarb will address a number of unanswered questions in carbon cycle science, with a focus on the Americas. For example, to what extent does the Amazonia basin remove carbon dioxide from the atmosphere and store it in forests, and are methane emission estimates over the continental United States underestimated?

GeoCarb will also be the first U.S. satellite to measure methane near Earth's surface, information that will be useful for the energy industry. Methane leakage from natural gas production costs U.S. industry $5 billion to $10 billion a year.

Like OCO-2, GeoCarb's oxygen spectral band, which is needed to convert abundances of carbon gases to concentrations, will also measure SIF. This faint glow, emitted by the chlorophyll molecules in the leaves of plants, is an indicator that photosynthesis -- the process by which plants convert sunlight into chemical energy and capture carbon from the atmosphere -- is occurring. GeoCarb will make daily, near wall-to-wall measurements of SIF under all weather conditions, allowing scientists and others to track the effects of drought on photosynthesis in forests, crops and grasslands.

GeoCarb stands on the foundation set by OCO-2, which was built by NASA's Jet Propulsion Laboratory in Pasadena, California. Like OCO-2, GeoCarb uses a grating spectrometer, but adds a fourth spectral band to measure carbon monoxide and methane. It will use the same detector technology, algorithms and calibration techniques as OCO-2.

"We would never be able to do GeoCarb without OCO-2," said Moore. "In designing our instrument we said, let's do OCO, but in geostationary orbit. We're building on JPL's work in designing and building OCO-2 and processing its data. In fact, many members of our science team are also working on the OCO-2 mission."

The GeoCarb instrument views reflected light from Earth through a narrow slit. When the slit is projected onto Earth's surface, it sees an area measuring about 1,740 miles (2,800 kilometers) from north to south and about 3.7 miles (6 kilometers) from east to west. In comparison, OCO-2's swath is about 6.2 miles (10 kilometers) wide. GeoCarb stares at that area for about 4-1/2 seconds, then the slit is moved half a slit width -- 1.9 miles, or 3 kilometers -- to the west, allowing for double sampling. With this technique, GeoCarb can scan the entire continental United States in about 2-1/4 hours, and from Brazil to South America's West Coast in about 2-3/4 hours. It is not designed to observe the oceans, as reflectivity over the oceans is too low to provide useful data.

GeoCarb's exact orbital slot will be assigned by SES-Government Solutions. A slot farther to the west will favor U.S. observations over South America, and vice versa for a slot farther to the east. In the future, Moore says two to three more GeoCarb-like instruments placed in geostationary orbit at different longitudes could provide near-global coverage of Earth's terrestrial landscape outside of the poles.

Moore says GeoCarb and TEMPO, another NASA atmospheric chemistry/air quality mission currently in development, are serving as pathfinders for geostationary, commercially-hosted NASA Earth-observing missions. "If we can work out the legal and practical day-to-day issues, I can see these missions changing the face of Earth science from space. You don't have to pay for a separate spacecraft or launcher. You're essentially buying condo space on a spacecraft and paying for data downlink. The future here is very exciting."

Updated on January 24, 2018 at 1:20 p.m. PT to correct the latitude range over which GeoCarb will make observations.