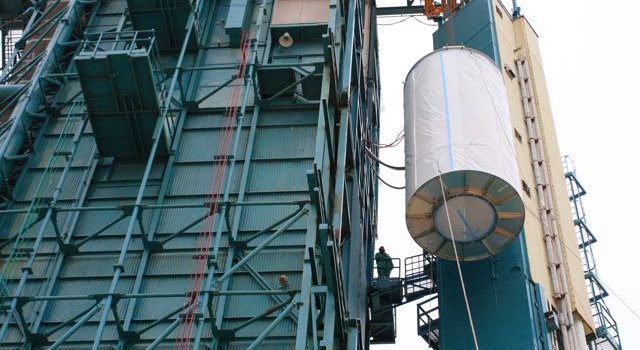 An overhead crane lifts the Aquarius/SAC-D spacecraft, secured inside its payload transportation canister, into the mobile service tower at NASA's Space Launch Complex-2 (SLC-2) at Vandenberg Air Force Base in California. There, the spacecraft will be integrated to a United Launch Alliance Delta II rocket in preparation for the targeted June liftoff. Aquarius, the NASA-built instrument on the SAC-D spacecraft, will provide new insights into how variations in ocean surface salinity relate to fundamental climate processes on its three-year mission.
Credit: NASA/VAFB

Many natural sources, besides salinity, contribute to the microwave radiation at L-band frequencies (approximately 1 gigahertz) measured by satellites. Correcting the influence of these natural sources is a key to obtaining Aquarius’ accurate salinity measurements.
Credit: NASA 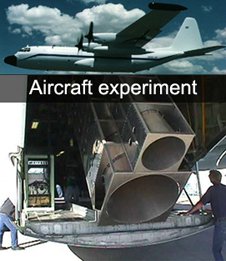 Twenty years after scientists first recognized that precise measurements of ocean salinity from space were possible, NASA's Aquarius mission is poised to realize their dream.

The breakthrough moment for oceanographer Gary Lagerloef, the principal investigator for NASA's new Aquarius mission, came in 1991. That's when he knew it would be possible to make precise measurements of ocean salinity from space. It has taken nearly two decades to turn that possibility into a reality.

Lagerloef was looking at data collected by a NASA aircraft flying over the ocean off the coast of Maryland. It was testing a new radiometer, an instrument that can sense thermal signals emitted by land, clouds and the ocean surface. The instrument not only captured the unique signature of dissolved salt in the surface water below, it showed how the water's salt content varied from one side of the Gulf Stream to the other.

"That flight was a turning point," said Lagerloef, a senior scientist at Earth & Space Research, Seattle. "We could clearly see the range that we needed to study salinity from its lowest levels in the North Pacific to the highest salinity levels in the North Atlantic."

Salinity, or saltiness, plays a critical role in ocean circulation and is a key tracer for understanding the ocean's role in Earth's global water cycle. While satellites routinely provide information on sea surface temperature, sea level, ocean color and ocean winds, historically, no global view of ocean surface salinity had been available. Salinity measurements were limited to those by ships, buoys and floats until recently - and are still few and far between.

Measuring salinity from space is extremely challenging and has been one of the last frontiers for ocean remote sensing. The European Space Agency launched a mission to measure soil moisture and ocean salinity in 2009. And now the Aquarius/SAC-D mission developed by NASA and Argentina's space agency, the Comisión Nacional de Actividades Espaciales, is being readied for launch on June 9. The two missions are complementary, but differ in focus and technology. One important difference is that Aquarius uses both a passive radiometer to detect ocean salinity and an active scatterometer radar to correct the radiometer's salinity measurements for wind roughness (waves) at the sea surface. This is the first combination of this kind used in space for Earth observations, whereas the European Space Agency mission uses only a passive radiometer.

Aquarius is dedicated to making precise measurements of ocean salinity over months and years, providing important new information for climate studies. It will produce monthly maps of the surface salinity of the global ocean with a 93-mile (150-kilometer) resolution and an accuracy of 0.2 practical salinity units, which is equal to about one-eighth teaspoon of salt in a gallon of water. (Practical salinity is a scale used to describe the concentration of dissolved salts in seawater, nearly equivalent to parts per thousand.) The mission is to make these measurements continuously for at least three years.

"This is a level of accuracy and stability that has never been achieved in space before," said Aquarius Instrument Scientist Simon Yueh, of NASA's Jet Propulsion Laboratory, Pasadena, Calif., which is managing the mission for NASA through its commissioning phase.

"The first challenge is that the signal we are measuring is very small," said Aquarius Deputy Principal Investigator David Le Vine, of NASA's Goddard Space Flight Center, Greenbelt, Md. "It is a very tiny signal in a noisy environment. In addition, the dynamic range - the difference in the signal that comes from water with low salinity and water with high salinity - is also small."

The Aquarius instrument has three separate radiometers aimed at the ocean below. The radiometers are designed to detect and measure a particular wavelength of microwave energy being emitted by the ocean.

"Everything radiates energy," explained Le Vine. "When you see the glow of an electric stove, you're seeing thermal radiation. It is in a range that our eyes can see. Night-vision goggles let you see radiation in the infrared part of the spectrum. For Aquarius, we're measuring radiation at microwave frequencies."

The radiometers on Aquarius measure the microwave emissions from the sea surface at 1.4 gigahertz in the L-band portion of the electromagnetic spectrum. This energy, which is measured as an equivalent temperature called the "brightness temperature" in Kelvin, has a direct correlation to surface salinity.

"Lots of things interfere with the salinity signal Aquarius is measuring, such as land and atmospheric effects," said Le Vine. "Ocean waves are a particularly significant source of 'noise' that can confuse the signal from salinity. That's why we have an additional instrument, a scatterometer, on board to help correct for this." The scatterometer sends a radar pulse to the ocean surface that is reflected back to the spacecraft, providing information about the ocean surface.

Because of its importance, the 1.4 gigahertz band is protected for scientific use. Nevertheless, says Aquarius Science Team Member Frank Wentz, director of Remote Sensing Systems, Santa Rosa, Calif., stray signals from radar, telephone and radio occasionally cause problems. Aquarius' radiometers are designed to detect much of this interference and eliminate contaminated measurements.

Wentz is part of the team creating the complicated mathematical formula - called a retrieval algorithm - that Aquarius will use to translate brightness temperature into measurements of salinity. "It's basically a big subtraction process," he said. "We figure out all the things that interfere with the signal we want and eliminate their effect on our measurement. This would be challenging enough to do even if the ocean were perfectly flat like a mirror. Instead, because of waves, it's more like a funhouse mirror that distorts everything."

Aquarius' primary focus is to see how salinity varies from place to place and changes with time. This task would be easier if there were a greater difference in the signal between the regions with low salinity and those with high salinity.

Over the open ocean, salinity is relatively constant. It ranges from about 32 to 37 parts per thousand. The corresponding change in brightness temperature -- what Aquarius measures -- is very small. Aquarius has been designed to detect changes in salinity as small as about two parts per 10,000, which corresponds to about 0.1 Kelvin. "This will be about 10 times more accurate than previous spaceborne radiometer observations of other sea surface characteristics," said Yueh.

Aquarius has to be extremely stable as well as sensitive. "If we want to see small things over long periods of time, we have to make sure that the instrument itself doesn't change. We need to know that any variations we observe are real and not caused by the instrument itself," said Yueh. Making this happen required special engineering attention to temperature control and calibration.

Controlling the temperature, critical for maintaining precision and stability, within a large instrument is difficult. JPL engineers had to design special computer models to understand the system's thermal behavior and its electronics. "This had never been done before for an instrument of this size operating over months and years," said Yueh.

All microwave radiometers, including Aquarius, require a calibration reference point. Most operational spacecraft radiometers continuously turn to look at cold space in order to calibrate their instruments. Aquarius, however, uses internal calibration to help retain its stability. "We have a big antenna and a large instrument," said Yueh. "No one wants to spin this instrument around frequently to look at an external reference."

While Aquarius benefits from advanced technologies such as internal calibration and sophisticated radiometers, its ability to measure global ocean surface salinity with unprecedented accuracy is the result of years of research and planning.

The key to making this challenging measurement, say Aquarius science team members, is in the details. And from the tiny, detailed measurements of salinity that Aquarius makes, a new "big" picture of Earth's ocean will emerge.