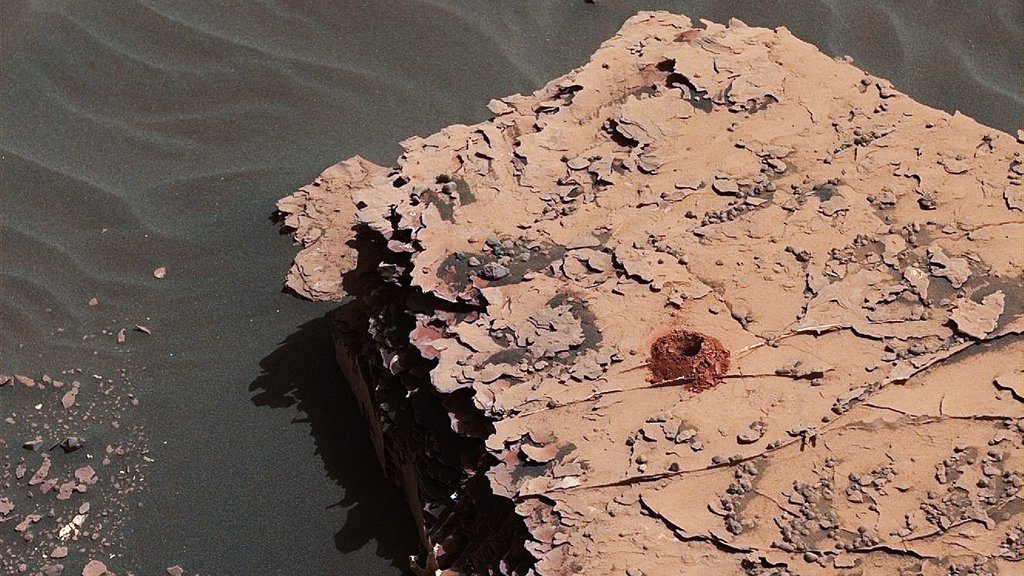 NASA's Curiosity rover successfully drilled a 2-inch-deep hole in a target called "Duluth" on May 20. It was the first rock sample captured by the drill since October 2016. This image was taken by Curiosity's Mast Camera (Mastcam) on Sol 2057. It has been white balanced and contrast-enhanced.› Full image and caption
Credit: NASA/JPL-Caltech/MSSS 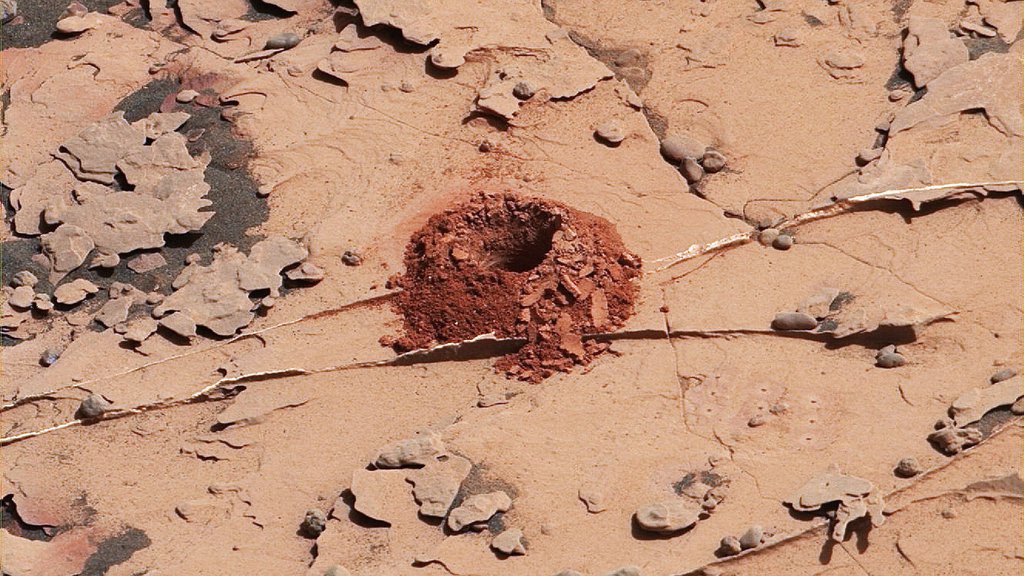 A close-up image of a 2-inch-deep hole produced using a new drilling technique for NASA's Curiosity rover. The hole is about 0.6 inches across (1.6 centimeters). This image was taken by Curiosity's Mast Camera (Mastcam) on Sol 2057. It has been white balanced and contrast-enhanced.› Full image and caption
Credit: NASA/JPL-Caltech/MSSS

Engineers working with NASA's Curiosity Mars rover have been hard at work testing a new way for the rover to drill rocks and extract powder from them. This past weekend, that effort produced the first drilled sample on Mars in more than a year.

Curiosity tested percussive drilling this past weekend, penetrating about 2 inches (50 millimeters) into a target called "Duluth."

NASA's Jet Propulsion Laboratory in Pasadena, California, has been testing this drilling technique since a mechanical problem took Curiosity's drill offline in December of 2016. This technique, called Feed Extended Drilling, keeps the drill's bit extended out past two stabilizer posts that were originally used to steady the drill against Martian rocks. It lets Curiosity drill using the force of its robotic arm, a little more like the way a human would drill into a wall at home.

"The team used tremendous ingenuity to devise a new drilling technique and implement it on another planet," said Curiosity Deputy Project Manager Steve Lee of JPL. "Those are two vital inches of innovation from 60 million miles away. We're thrilled that the result was so successful."

Drilling is a vitally important part of Curiosity's capabilities to study Mars. Inside the rover are two laboratories that are able to conduct chemical and mineralogical analyses of rock and soil samples. The samples are acquired from Gale Crater, which the rover has been exploring since 2012.

Curiosity's science team has been eager to get the drill working before the rover leaves its current location near Vera Rubin Ridge. Fortunately, it was near enough to drill targets like Duluth to drive back down the ridge. Sunday's drill sample represents a quick taste of the region before Curiosity moves on.

Demonstrating that Curiosity's percussive drilling technique works is a milestone in itself. But that doesn't mean the work is over for engineers at JPL.

"We've been developing this new drilling technique for over a year, but our job isn't done once a sample has been collected on Mars," said JPL's Tom Green, a systems engineer who helped develop and test Curiosity's new drilling method. "With each new test, we closely examine the data to look for improvements we can make and then head back to our test bed to iterate on the process."

There's also the next step to work on: delivering the rock sample from the drill bit to the two laboratories inside the rover. Having captured enough powder inside the drill, engineers will now use the rover's cameras to estimate how much trickles out while running the drill backwards. The drill's percussion mechanism is also used to tap out powder.

As soon as this Friday, the Curiosity team will test a new process for delivering samples into the rover's laboratories.