Cultivating a Planetary Garden: How Long Does it Take? 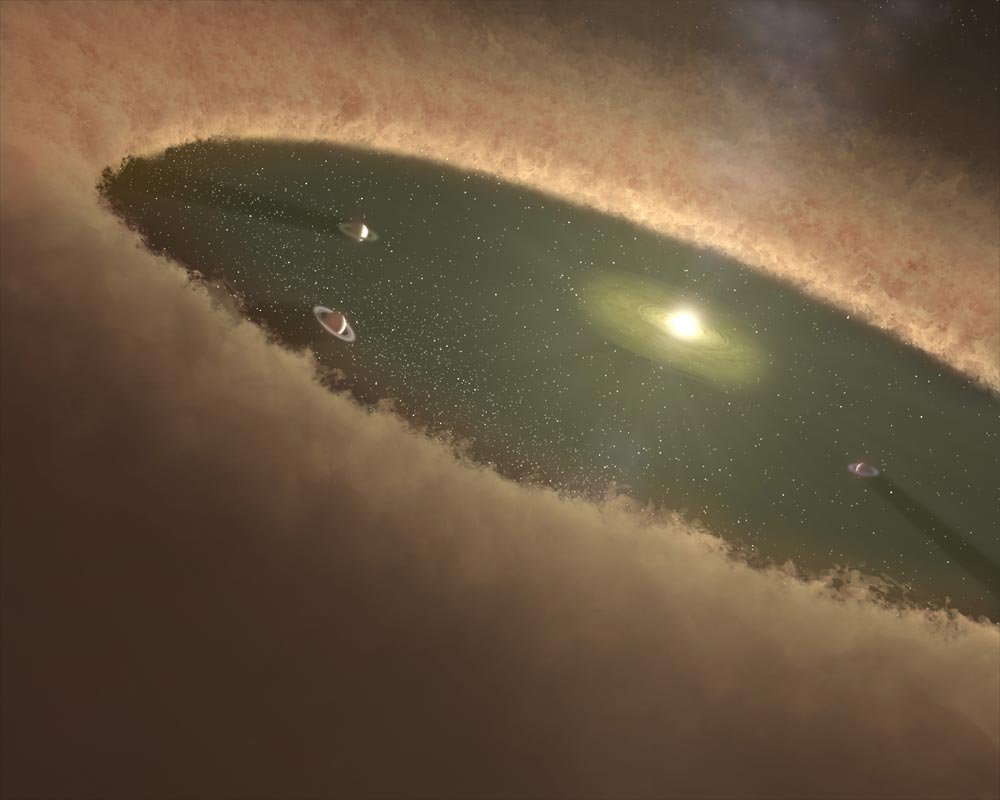 Astronomers using NASA's Spitzer Space Telescope have gathered the most detailed data yet on a gap in a protoplanetary, or planet-forming, disk surrounding a young star. This artist's concept illustrates one interpretation of the data, which attributes the disk gap to planet formation. At the center lies a young star that is pulling in material from an inner disk of dust and gas. The gap between this inner disk and the thick outer disk is believed to be occupied by developing gas giant planets. The putative planets prevent the outer disk material from naturally falling in toward the star, thereby creating the gap.
Credit: NASA/JPL-Caltech

According to the most popular theory of planet formation, planets are akin to redwood trees, growing in size very gradually.

According to the most popular theory of planet formation, planets are akin to redwood trees, growing in size very gradually. Rocky planets like Earth develop over millions of years, followed by gas giants like Jupiter, which build upon rocky cores.

But new evidence from NASA's Spitzer Space Telescope suggests that some gas giants may sprout in less than one million years, more like planetary wildflowers than trees.

The evidence comes in the form of gaps and holes. Planets are born out of flat disks of dust and gas that spin around young stars. As a burgeoning planet circles around its star, it is thought to cut through the disk, leaving an empty gap or doughnut-like hole.

Spitzer is acquiring data on more and more of these disk clearings around stars that are surprisingly young. Though some of the clearings were seen before, Spitzer's highly sensitive infrared eyes are providing new, detailed information that indicates gas giant planets may be the cause. Because the stars are only about one million years old, relatively young in cosmic terms, the putative planets would have sprung up quickly.

"The results pose a challenge to existing theories of giant planet formation, especially those in which planets build up gradually over millions of years," said Dr. Nuria Calvet of the University of Michigan, Ann Arbor. "Studies like this one will ultimately help us better understand how our outer planets, as well as others in the universe, form."

A new paper from Calvet and her team, appearing in the Sept. 10 issue of the Astrophysical Journal Letters, presents further evidence for fast-track planets. They report the most detailed models yet of two known clearings around young stars – a gap in the disk of GM Aurigae, and a hole in the disk of DM Tauri. Last year, the team found similar results on a third clearing, a hole in the disk of an equally young star called CoKuTau4. That study was led by team member Dr. Dan Watson of the University of Rochester, N.Y.

In all three cases, the Spitzer data reveal that the clearings have sculpted outer walls, a strong indicator that bodies are sweeping through the dust, leaving empty trails. The bodies would most likely be gas giants because rocky planets would be too small to produce the clearings. These observations were made with Spitzer's infrared spectrograph.

"Before we had only a fuzzy knowledge of the holes and the gap," said Calvet. "Spitzer's infrared spectrograph doesn't give us a picture, but provides detailed information about the structure of the clearings. The structure suggests that planets may be present."

GM Aurigae, DM Tauri and CoKuTau4 are all sibling stars living in the same youthful stellar neighborhood in the Taurus constellation, 420 light-years from Earth. GM Aurigae is about the same size as our Sun, while the two siblings are smaller. If DM Tauri's hole existed in our own solar system, it would encompass Mercury, Venus, Earth and Mars; CoKuTau4's hole would expand out to the orbit of Saturn, and GM Aurigae's gap would span the space between the orbits of Jupiter and Uranus.

"GM Aurigae is essentially a much younger version our Sun," said Watson. "Looking at it is like looking at baby pictures of our Sun and outer solar system."