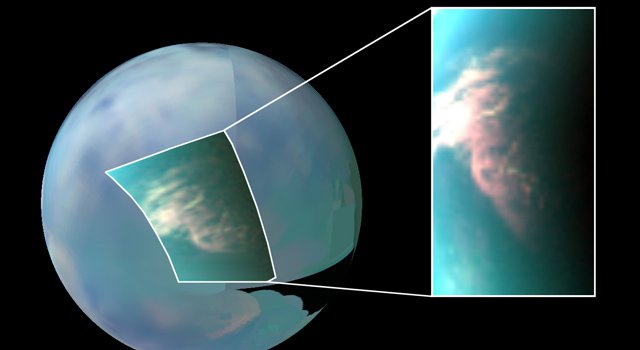 This infrared image of Saturn's moon Titan shows a large burst of clouds in the moon's south polar region.› Full image and caption
Credit: NASA/JPL/University of Arizona/University of Nantes 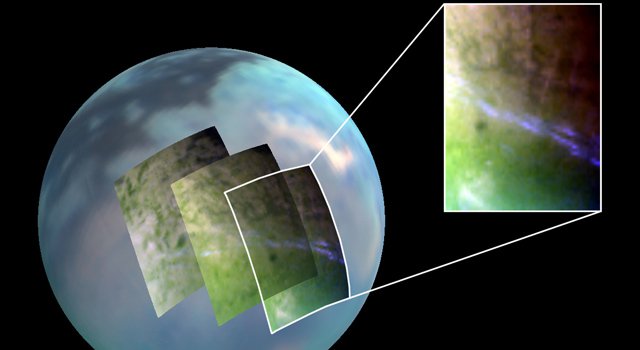 Lots of clouds are visible in this infrared image of Saturn's moon Titan. › Full image and caption

Their forecast for Titan's early autumn -- warm and wetter.

Scientists with NASA's Cassini mission have monitored Titan's atmosphere for three-and-a-half years, between July 2004 and December 2007, and observed more than 200 clouds. They found that the way these clouds are distributed around Titan matches scientists' global circulation models. The only exception is timing -- clouds are still noticeable in the southern hemisphere while fall is approaching.

"Titan's clouds don't move with the seasons exactly as we expected," said Sebastien Rodriguez of the University of Paris Diderot, in collaboration with Cassini visual and infrared mapping spectrometer team members at the University of Nantes, France. "We see lots of clouds during the summer in the southern hemisphere, and this summer weather seems to last into the early fall. It looks like Indian summer on Earth, even if the mechanisms are radically different on Titan from those on Earth. Titan may then experience a warmer and wetter early autumn than forecasted by the models."

On Earth, abnormally warm, dry weather periods in late autumn occur when low-pressure systems are blocked in the winter hemisphere. By contrast, scientists think the sluggishness of temperature changes at the surface and low atmosphere on Titan may be responsible for its unexpected warm and wet, hence cloudy, late summer.

The new infrared images showing the global cloud pattern are now available at: http://saturn.jpl.nasa.gov and http://www.nasa.gov/cassini .

As summer changes to fall at the equinox in August 2009, Titan's clouds are expected to disappear altogether. But, circulation models of Titan's weather and climate predict that clouds at the southern latitudes don't wait for the equinox and should have already faded out since 2005. However, Cassini was still able to see clouds at these places late in 2007, and some of them are particularly active at mid-latitudes and the equator.

Titan is the only moon in our solar system with a substantial atmosphere, and its climate shares Earth-like characteristics. Titan's dense, nitrogen-methane atmosphere responds much more slowly than Earth's atmosphere, as it receives about 100 times less sunlight because it is 10 times farther from the sun. Seasons on Titan last more than seven Earth years.

Scientists will continue to observe the long-term changes during Cassini's extended mission, which runs until the fall of 2010. Cassini is set to fly by Titan on June 6.

The Cassini-Huygens mission is a cooperative project of NASA, the European Space Agency and the Italian Space Agency. NASA's Jet Propulsion Laboratory, Pasadena, Calif., manages the Cassini-Huygens mission for NASA's Science Mission Directorate. The Cassini orbiter was designed, developed and assembled at JPL. The visual and infrared mapping spectrometer team is based at the University of Arizona.