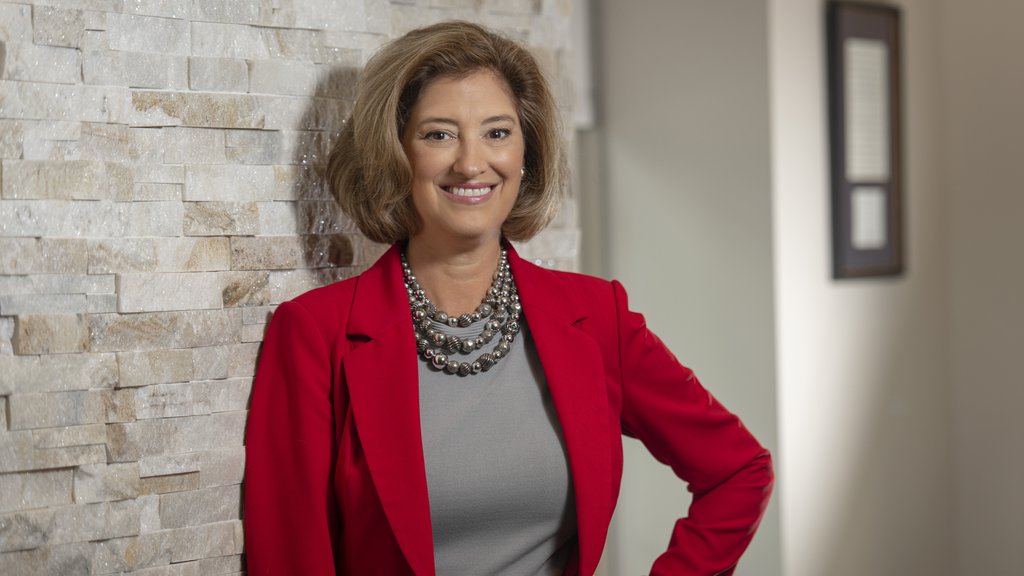 Laurie Leshin formally assumes her roles as director of NASA JPL and vice president of Caltech in May.

The distinguished geochemist and space scientist brings more than 20 years of leadership experience in academic and government service to JPL.

Laurie Leshin, president of Worcester Polytechnic Institute (WPI), has been appointed director of the Jet Propulsion Laboratory (JPL) and vice president of Caltech. Leshin will formally assume her position on May 16, 2022, succeeding Michael Watkins, who retired in August 2021, and Lt. Gen. Larry D. James USAF (Ret.), who currently serves as JPL interim director.

She joins JPL from WPI, one of the nation’s oldest private STEM universities, where she has served as president since 2014. She is the first woman president in the university’s 150-year history and will be JPL’s first female director.

“Laurie Leshin stood out in an exhaustive international search because of her profound commitment to people, her strategic approach to scientific and technological opportunities, her deep appreciation of NASA’s leadership in space exploration and Earth science, her mastery of complex organizations, and her ability to inspire the next generation of scientists and engineers,” says Caltech president Thomas F. Rosenbaum, the Sonja and William Davidow Presidential Chair and professor of physics. “We are so pleased to be able to welcome Laurie back to campus and to JPL.”

“NASA’s Jet Propulsion Laboratory has a storied history of defying what was once thought impossible in the field of space exploration. In this new era of groundbreaking discoveries and constant innovation, it is clear that Dr. Laurie Leshin has a track record of scholarship and leadership needed to serve as director of JPL and cement the center’s status as a global leader in the 21st century,” says NASA Administrator Bill Nelson. “Under Dr. Leshin, the technology invented at JPL will continue to allow humans to explore the places in our universe that we cannot yet reach and spark the imaginations of future mathematicians, engineers, and pioneers in classrooms across America. I want thank Mike Watkins and Gen. Larry James for their contributions that the JPL team will build on for decades to come.”

Leshin is an internationally recognized scientist whose career has spanned academia and senior positions at NASA, and included two White House appointments. She has been lauded for her barrier-breaking leadership in the space industry and in academia as well as for her accomplishments as a distinguished geochemist and space scientist. 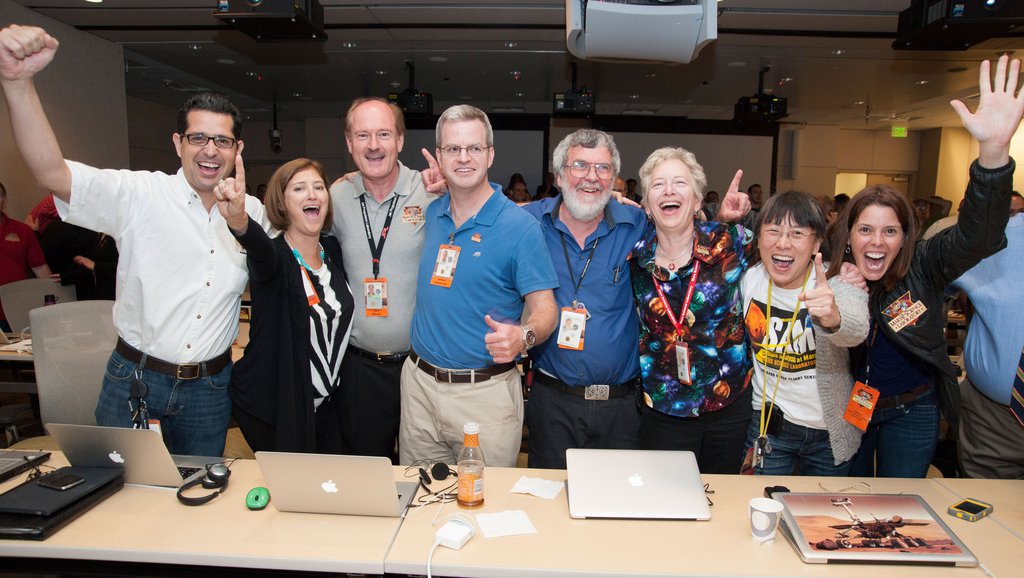 Laurie Leshin, second from left, celebrates the landing of NASA’s Curiosity rover on Aug. 5, 2012, with other members of the science teams at JPL. Leshin is a co-Investigator on two of the rover’s instruments, the Sample Analysis at Mars (SAM) tool and the Alpha Particle X-Ray Spectrometer (APXS). She previously served as a long-term planner on the mission.

“I am both thrilled and humbled to be appointed the director of JPL. In many ways, this feels like a homecoming. Some of the most impactful experiences of my career have taken place on the Caltech campus and at JPL – lessons learned and goals achieved that have shaped me as a leader and a space scientist. The opportunity to return to working closely with so many colleagues across Caltech – at the Lab and on campus – and at NASA is a dream come true,” Leshin says. “We have enormous opportunities ahead to leverage JPL’s global leadership in robotic space exploration to answer awe-inspiring scientific questions and improve life here on Earth. I look forward to my work with Caltech and NASA to ensure that JPL continues to drive innovation across the global space ecosystem. Finally, I am especially honored to be the first woman to hold the title of director of JPL. I know from personal experience that diverse teams make greater impact, and I will work every day to ensure that JPL is a place where all belong and thrive. We will dare mighty things, together.”

In 2005, she became director of science and exploration at NASA’s Goddard Space Flight Center, and in 2008, she was promoted to Goddard’s deputy director for science and technology, where she and colleagues were responsible for the strategy, planning, and implementation of more than 50 Earth and space flight projects. In 2010, Leshin assumed the role of deputy associate administrator of the Exploration Systems Mission Directorate at NASA Headquarters, where her work involved the oversight of the future human spaceflight program, including efforts to establish commercial crew capabilities and elements of what is now the Artemis program. In that role, Leshin also worked to catalyze worldwide space exploration by engaging with international space organizations and corporations, and through developing new technologies and robotic missions to create new possibilities for humans to travel to destinations deeper in the solar system. Leshin left NASA in 2011 to join Rensselaer Polytechnic Institute as dean of the School of Science.

At WPI, Leshin focused on expanding research, WPI’s signature Global Projects Program, and ways to address gender disparity in STEM. In addition, during her presidential tenure, new academic and collaboration spaces were developed on the WPI campus, notably a 40,000-square-foot Innovation Studio, with flexible, creative space for active learning classrooms, and the newly opened Unity Hall, a 100,000-square-foot academic building focused on robotics engineering, data science, cybersecurity, learning sciences and technology, and other emerging interdisciplinary programs. WPI is now among STEM institutions with the highest percentage of female undergraduate students and is recognized for its balance of excellence in teaching and groundbreaking research.

Alongside her administrative career, Leshin has continued her scientific endeavors, which are focused on deciphering the record of water on objects in our solar system. For example, she served as a member of the Mars Science Laboratory science team that analyzed data collected by the Curiosity rover to find evidence of water on the surface of Mars. She has also been involved in planning and advocating for Mars Sample Return missions for more than two decades.

Raised in Arizona, Leshin earned a bachelor’s degree in chemistry from Arizona State University (ASU), followed by master’s and doctoral degrees in geochemistry from Caltech. After a postdoctoral fellowship at UCLA, she served as a professor of geological sciences at ASU and director of its Center for Meteorite Studies. Before leaving ASU for NASA, she led the formation of ASU’s pathbreaking School of Earth and Space Exploration.

Leshin is a recipient of NASA’s Outstanding Leadership Medal and Distinguished Public Service Medal, and of the Meteoritical Society’s Nier Prize, awarded for outstanding research in meteoritics or planetary science by a scientist under the age of 35. The International Astronomical Union recognized her contributions to planetary science with the naming of asteroid 4922 Leshin.

In 2004, Leshin served on President George W. Bush’s Commission on Implementation of United States Space Exploration Policy, a nine-member commission charged with advising the president on the execution of his new Vision for Space Exploration. In 2013, President Barack Obama appointed Leshin to the advisory board of the Smithsonian Institution’s National Air and Space Museum. Since 2016, she has co-chaired the National Academies Government-University-Industry Research Roundtable.

In 2021, Leshin received Caltech’s Distinguished Alumni Award, which is bestowed annually by the Institute in recognition of personal and professional accomplishments that have made a noteworthy impact in a field, community, or society more broadly.

A committee composed of Caltech trustees, faculty, senior administrative leaders, and two members of the JPL community conducted an extensive search and recommended Leshin to Caltech’s president. JPL, which was founded by Caltech faculty and students in 1936, has been managed by Caltech on behalf of NASA since 1958.