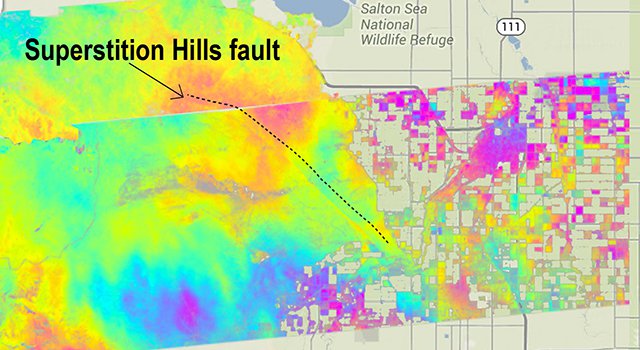 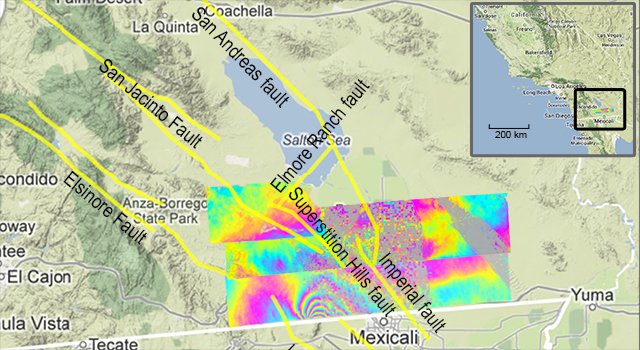 UAVSAR measurements north of the 2010 El Mayor-Cucapah earthquake, which scientists have learned was followed by quiet movement on faults in California. Inset map shows the region on the California-Mexico border.
Credit: NASA/JPL/USGS/California Geological Survey/Google

A new NASA study finds that a major 2010 earthquake in northern Mexico triggered quiet, non-shaking motions on several Southern California faults that released as much energy as a magnitude 4.9 to 5.3 earthquake.

The quiet motion associated with the widely felt, magnitude 7.2 earthquake centered in northern Baja California in Mexico, in April 2010 was discovered in before-and-after radar images of the region made by a NASA airborne instrument that produces extremely accurate maps of Earth motions. The Uninhabited Aerial Vehicle Synthetic Aperture Radar (UAVSAR), which flies on a NASA C-20A aircraft from NASA's Armstrong Flight Research Center facility in Palmdale, Calif., allows scientists to see how locations on Earth's surface change between repeat flights over the same spot.

"It's a new way of seeing the earthquake cycle," said Andrea Donnellan of NASA's Jet Propulsion Laboratory, Pasadena, Calif., who led the study, published recently in the journal Geochemistry, Geophysics, Geosystems. "If we had been relying only on seismometers, we wouldn't have known the extent to which these California faults were active." Quiet, or aseismic, movement in faults doesn't shake the ground, so it isn't recorded by seismometers, which are typically used to study earthquakes.

The 2010 El Mayor-Cucapah quake area is at the transition between spreading faults in the Gulf of California and sliding faults (called transform faults) where the Pacific and North American plates grind past each other along the West Coast. "The Earth is hot and soft there, and the plate boundary is still sorting itself out," Donnellan said. The region is scored by roughly parallel faults running northwest-southeast, which are linked by short, crosswise faults.

In 2009, Donnellan and her colleagues chose this and two other California regions for UAVSAR observations because a JPL earthquake model targeted them as high-risk spots for a major earthquake. They also targeted the La Habra, California area, site of the recent March 28 magnitude 5.1 quake. Donnellan is following up with UAVSAR flights there as well to understand the motions related to that earthquake.

"Large, diffuse areas of slip are hard to document in the field, but they show up in UAVSAR images," she said.

These UAVSAR flights are part of a larger NASA-led effort to regularly monitor crustal deformation throughout much of California in order to better understand geologic hazards such as earthquakes, volcanoes, landslides and sinkholes. The UAVSAR data complement that obtained from spaceborne instruments and help NASA design more effective satellite observatories for global application.

For more information about UAVSAR, visit: