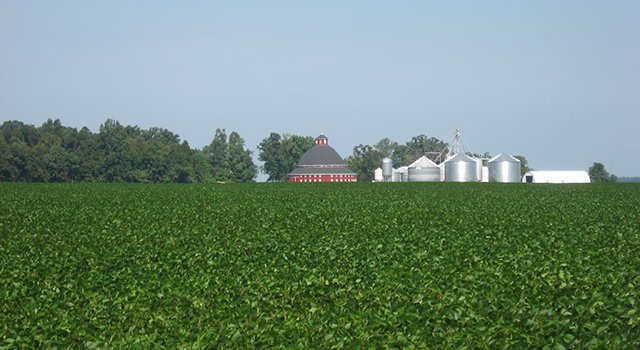 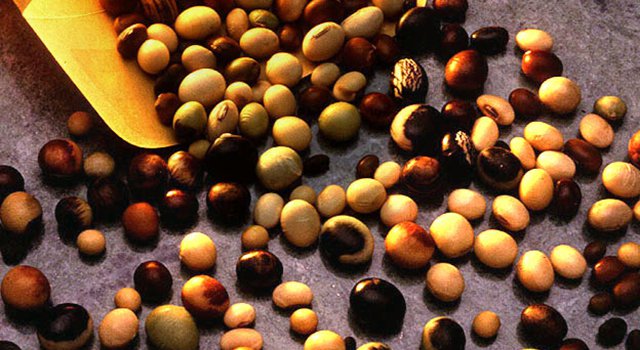 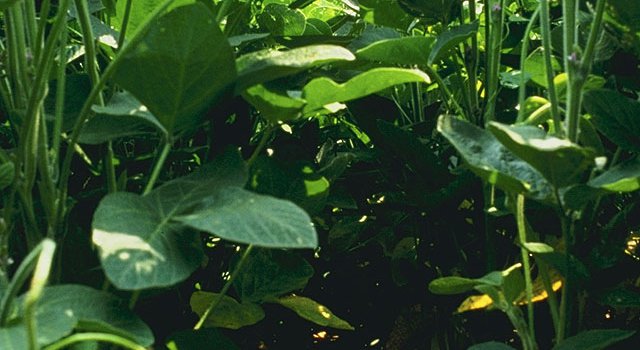 Modern soybean plants have dense top canopies that get more sunlight than they can use for photosynthesis, while limiting photosynthesis in the plant's lower leaves by shading them.
Credit: USDA

A new study shows that soybean plants can be redesigned to increase crop yields while requiring less water and helping to offset greenhouse gas warming.

A new study shows that soybean plants can be redesigned to increase crop yields while requiring less water and helping to offset greenhouse gas warming. The study is the first to demonstrate that a major food crop can be modified to meet multiple goals at the same time.

The study, led by Darren Drewry of NASA's Jet Propulsion Laboratory, Pasadena, Calif., used an advanced vegetation model and high-performance computer optimization techniques. It found that by redesigning soybean plants in various ways, it was possible to increase soybean productivity by seven percent without using more water. Soybean plants also could be redesigned either to use 13 percent less water or to reflect 34 percent more light back to space without a loss of crop yield. The research was funded by the National Science Foundation with support from JPL and the Bill and Melinda Gates Foundation.

"My intuition would have told me that some of these goals are mutually exclusive -- that there is a fundamental tradeoff between increasing productivity and conserving water," said Drewry. "We are now able to say that there actually is a combination of traits that will make progress toward all of these goals simultaneously." The study by Drewry and coauthors Praveen Kumar and Stephen Long (both of the University of Illinois) was published April 4 in the journal Global Change Biology.

The research comes at a time when global food security is threatened by population growth and climate change. The United Nations estimates that food production will need to increase 70 percent by 2050 to meet the world's food needs. Today, yields of major crops are increasing slowly or not at all. Soybeans are the world's most important protein crop.

Drewry developed the model that he used for this study (called MLCan, for multi-layer canopy model) to study U.S. Midwest agricultural systems, but it can be modified for research on other types of vegetation. It captures exchanges of carbon dioxide, water and energy between vegetation and the atmosphere in great detail.

The research used numerical optimization, a mathematical way to decide which choice among a range of options will create the closest match to a desired outcome. Drewry chose five structural characteristics of a plant, such as the total leaf area (the number and size of the leaves) and the angle at which leaves are set on the plant stems. The MLCan model varied one or a combination of the five traits for each experiment, discarding less successful solutions and refining those that made progress toward the goals.

Depending on which goals they are intended to meet, redesigned soybean plants can differ significantly. One experiment in the study produced a plant that required 13 percent less water but was just as productive as current varieties, which would be valuable for farmers in drought-stricken areas. This plant had fewer leaves overall, and more of the leaves were located toward the bottom of the plant than is common among current varieties.

Reflecting more radiation back to space involves redesigning a number of traits, such as how much light leaves reflect in what portions of the solar spectrum, the angle of the leaves and the distribution and density of foliage.

The modeling study quickly found answers that would have required decades of crossbreeding in the field, according to Drewry. Plant hybridizers address one trait at a time, and creating a new prototype typically takes several generations -- with no guarantee that the trait in question is the most critical one for meeting the hybridizer's goal. "Looking at two or three traits at once is too complex, and the length of time it would take to implement the changes in the field is prohibitive," Drewry said.

Seed collections -- for example, the U.S. Department of Agriculture's Soybean Germplasm Collection of about 20,000 varieties from around the world -- are likely to contain the genetic material needed to breed a soybean plant with these traits. Crop management choices may also be able to produce soybean canopies with the desired traits.

Compared to many of the so-called geoengineering solutions that have been suggested for climate change, such as spraying sulfates into the upper atmosphere to reduce incoming sunlight, or loading the ocean with iron to increase plankton photosynthesis, modifying annual crop covers is inexpensive, can be implemented quickly and is reversible. "Many proposed geoengineering solutions require significant resources, and we don't know all of the potential downstream effects," Drewry said. "If changing an annual crop has an unforeseen consequence, we can simply return to the one we grew the previous year."

NASA develops new ways to observe and study Earth's interconnected natural systems with computer analyses and long-term data records to better see how our planet is changing. NASA monitors Earth's vital signs from land, air and space with a fleet of satellites and ambitious airborne and ground-based observation campaigns. The agency shares this unique knowledge with the global community and works with institutions in the United States and around the world that contribute to understanding and protecting our home planet.