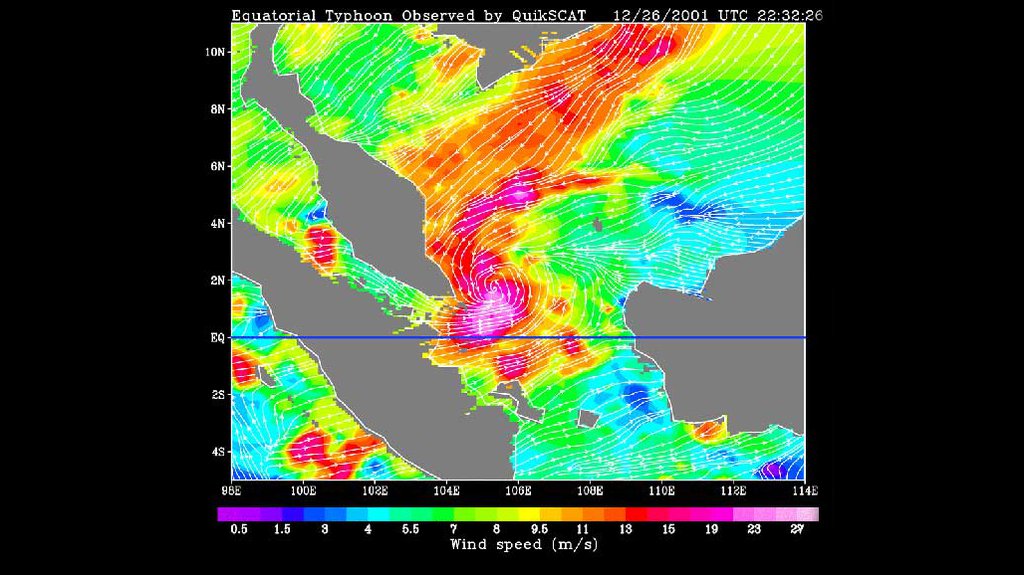 Strong surge of winds coming from the north and the curve they make to help give birth to Typhoon Varmei near the equator (the horizontal blue line) in December 2001.

Storms like Typhoon Varmei aren't supposed to happen. So when U.S. Navy ships were hit by this tropical cyclone in the South China Sea in December 2001, researchers at the Naval Postgraduate School, Monterey, Calif., decided to take a closer look.

Storms like Typhoon Varmei aren't supposed to happen. So when U.S. Navy ships were hit by this tropical cyclone in the South China Sea in December 2001, researchers at the Naval Postgraduate School, Monterey, Calif., decided to take a closer look. "For centuries, sailors haven't worried about tropical storms near the equator," says Dr. C. -P. Chang, a meteorology professor at the school, "It's a rule that cyclones are not supposed to develop there."

The textbooks say that cyclones such as hurricanes (or typhoons as they're called in the western Pacific) don't form within 300 kilometers (about 186 miles) of the equator. Typhoon Varmei proved to be an exception to the rule. It spun up just 150 kilometers (about 93 miles) north of the equator - much closer to Earth's midriff than any other recorded storm.

To figure out just what happened and how likely it was to happen again, Chang and two visiting professors from Taiwan analyzed data from several weather models and detailed measurements of wind speed and direction provided by NASA's QuikScat satellite. They discovered that not only did Typhoon Varmei develop in a very unlikely spot, it also got its start in an unusual way.

In Varmei's case, however, the researchers found that a combination of topography and meteorology, rather than Earth's rotation helped jump start the cyclone. A strong blast of air from Asia, called a monsoon surge, funneled rapidly down the South China Sea, reaching the equator in a narrow stretch of ocean between Malay Peninsula and Borneo. Due to the combined effect of the Coriolis effect changing from positive to negative and the complex terrain, the surge winds typically change direction from their original southwestward course to bend toward the east at the equator. In the case of Typhoon Varmei, a winter monsoon weather system with many thunderstorms happened to be sitting in the area where the surge winds curved. The system experienced enough spin to start the cyclone-building process. It evolved into Typhoon Varmei, a major cyclone with sustained winds of up to 140 kilometers (about 87 miles) per hour-strong enough to damage two of the unsuspecting Navy ships that got in its path.

Rare Tempest in a Teapot

"There is a reason why this kind of storm is very rare," says Chang. "Everything has to be just right. While the monsoonal surges, the very strong winds from Asia, are a common winter occurrence in the South China Sea, they have to encounter the thunderstorm weather system when it is in the middle of the water. There is only 500 kilometers (about 311 miles) between the Malay Peninsula and Borneo - about the size of a small cyclone. Both the strong monsoon winds and the weather system have to be there together for a few days. If the storm system drifts over land, the cyclonic development would stop."

"In the case of Varmei, everything was just the right size and in the right place and stayed long enough. We calculated that the odds of this happening again are about once every 100 to 400 years," Chang says.

Chang and his colleagues were supported by the National Science Foundation and the Office of Naval Research. They reported their findings about Varmei in the February 15, 2003, issue of Geophysical Research Letters.