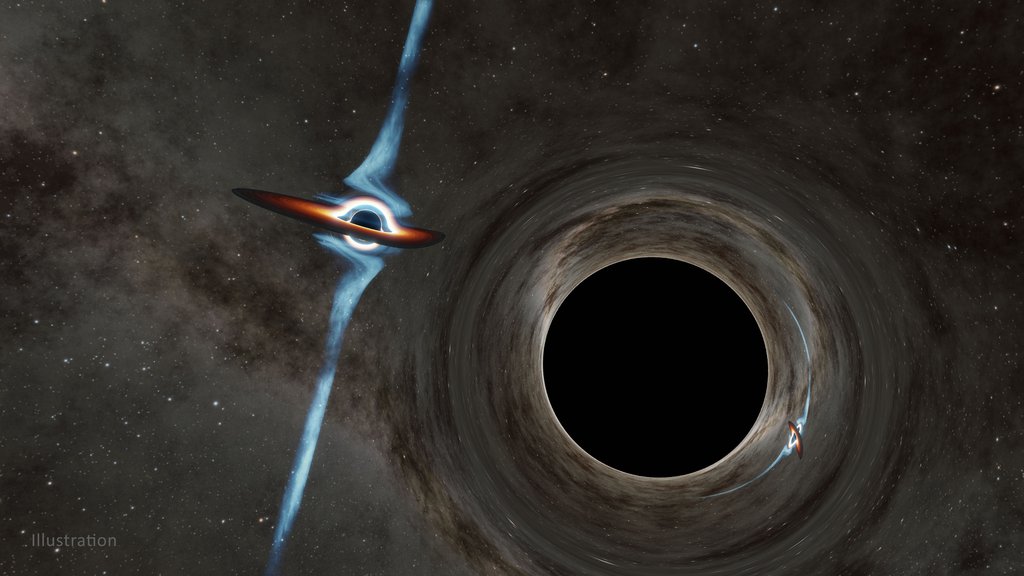 In this illustration, light from a smaller black hole (left) curves around a larger black hole and forms an almost-mirror image on the other side. The gravity of a black hole can warp the fabric of space itself, such that light passing close to the black hole will follow a curved path around it.

A supermassive black hole 9 billion light-years away appears to have a companion black hole orbiting around it. As the orbit shrinks, the pair gets closer to merging.

A new study may change that: Researchers observing a supermassive black hole report signs that it has a closely orbiting companion. The enormous duo – called a binary – circle one another about every two years.

If the team is correct, the diameter of the binary’s orbit is 10 to 100 times smaller than the only other known supermassive binary, and the pair will merge in roughly 10,000 years. That might seem like a long time, but it would take a total of about 100 million years for black holes of this size to begin orbiting one another and finally come together. So this pair is more than 99% of the way to a collision.

Joseph Lazio and Michele Vallisneri, at NASA’s Jet Propulsion Laboratory in Southern California, provided insight into how supermassive black holes behave in a binary system and how to interpret the radio data.

Evidence that this supermassive black hole may have a companion comes from observations by radio telescopes on Earth. Black holes don’t emit light, but their gravity can gather disks of hot gas around them and eject some of that material into space. These jets can stretch for millions of light-years. A jet pointed toward Earth appears far brighter than a jet pointed away from Earth. Astronomers call supermassive black holes with jets oriented toward Earth blazars, and a blazar named PKS 2131-021 is at the heart of this recent paper.

Located about 9 billion light-years from Earth, PKS 2131-021 is one of 1,800 blazars that a group of researchers at Caltech in Pasadena has been monitoring with the Owens Valley Radio Observatory in Northern California for 13 years as part of a general study of blazar behavior. But this particular blazar exhibits a strange behavior: Its brightness shows regular ups and downs as predictably as the ticking of a clock.

Researchers now think this regular variation is the result of a second black hole tugging on the first as they orbit each other about every two years. Each of the two black holes in PKS 2131-021 is estimated to be a few hundred million times the mass of our Sun. To confirm the finding, scientists will try to detect gravitational waves – ripples in space – coming from the system. The first detection of gravitational waves from black hole binaries was announced in 2016.

To confirm that the oscillations weren’t random or the cause of a temporary effect around the black hole, the team had to look beyond the decade (2008 to 2019) of data from the Owens Valley Observatory. After learning that two other radio telescopes had also studied this system – the University of Michigan Radio Observatory (1980 to 2012) and the Haystack Observatory (1975 to 1983) – they dug into the additional data and found that it matched predictions for how the blazar’s brightness should change over time.

“This work is a testament to the importance of perseverance,” said Lazio. “It took 45 years of radio observations to produce this result. Small teams, at different observatories across the country, took data week in and week out, month in and month out, to make this possible.”

To learn more, read the news release from Caltech.