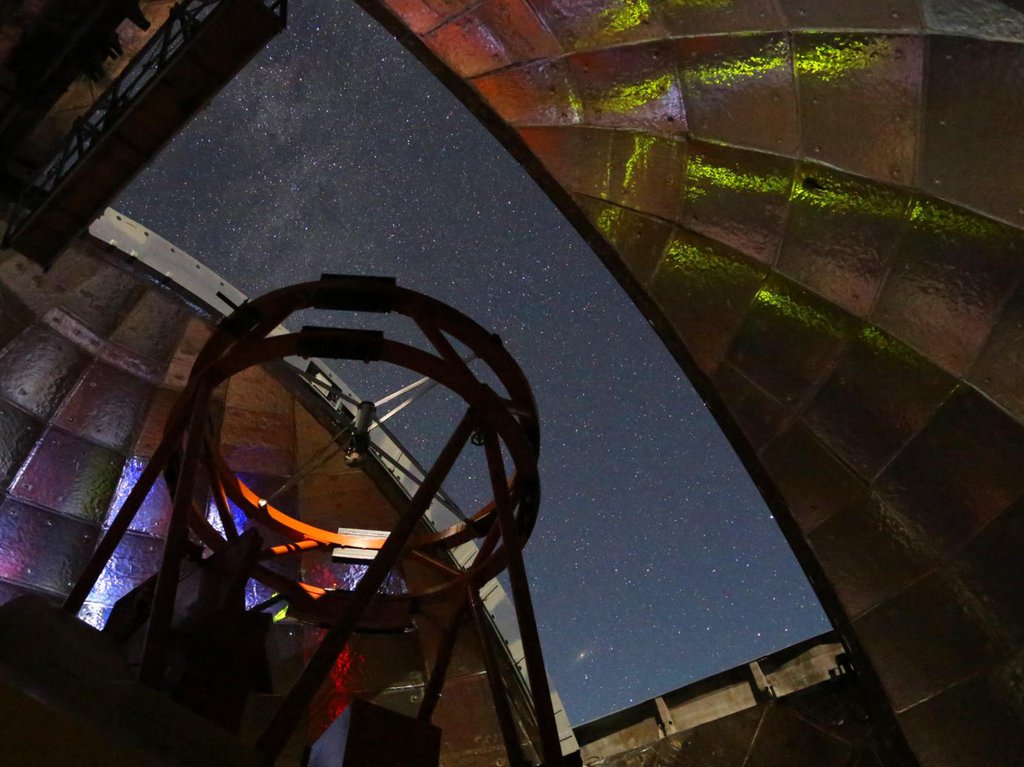 This photo shows the view from inside the dome of NASA’s Infrared Telescope Facility during a night of observing. The 3.2-meter (10.5-foot) telescope atop Hawaii’s Mauna Kea will be used to measure the infrared spectrum of asteroid 2001 FO32. Credit: UH/IfA Larger View

The interplanetary interloper won’t come closer than 1.25 million miles to Earth, but it will present a valuable scientific opportunity for astronomers.

The largest asteroid predicted to pass by our planet in 2021 will be at its closest on March 21, providing astronomers a rare opportunity to get a good look at a rocky relic that formed at the dawn of our solar system.

Called 2001 FO32, the near-Earth asteroid will make its closest approach at a distance of about 1.25 million miles (2 million kilometers) – or 5 1/4 times the distance from Earth to the Moon. There is no threat of a collision with our planet now or for centuries to come.

“We know the orbital path of 2001 FO32 around the Sun very accurately, since it was discovered 20 years ago and has been tracked ever since,” said Paul Chodas, director of the Center for Near Earth Object Studies (CNEOS), which is managed by NASA’s Jet Propulsion Laboratory in Southern California. “There is no chance the asteroid will get any closer to Earth than 1.25 million miles.”

Still, that distance is close in astronomical terms, which is why 2001 FO32 has been designated a “potentially hazardous asteroid.” CNEOS computes high-precision orbits for near-Earth objects (NEOs) in support of NASA’s Planetary Defense Coordination Office, relying on telescopes and ground-based radar to help precisely characterize every NEO’s orbit to improve long-term hazard assessments.

During this approach, 2001 FO32 will pass by at about 77,000 mph (124,000 kph) – faster than the speed at which most asteroids encounter Earth. The reason for the asteroid’s unusually speedy close approach is its highly inclined and elongated (or eccentric) orbit around the Sun, an orbit that is tilted 39 degrees to Earth’s orbital plane. This orbit takes the asteroid closer to the Sun than Mercury and twice as far from the Sun as Mars.

As 2001 FO32 makes its inner solar system journey, the asteroid picks up speed like a skateboarder rolling down a halfpipe, and then slows after being flung back out into deep space and swinging back toward the Sun. It completes one orbit every 810 days (about 2 1/4 years). 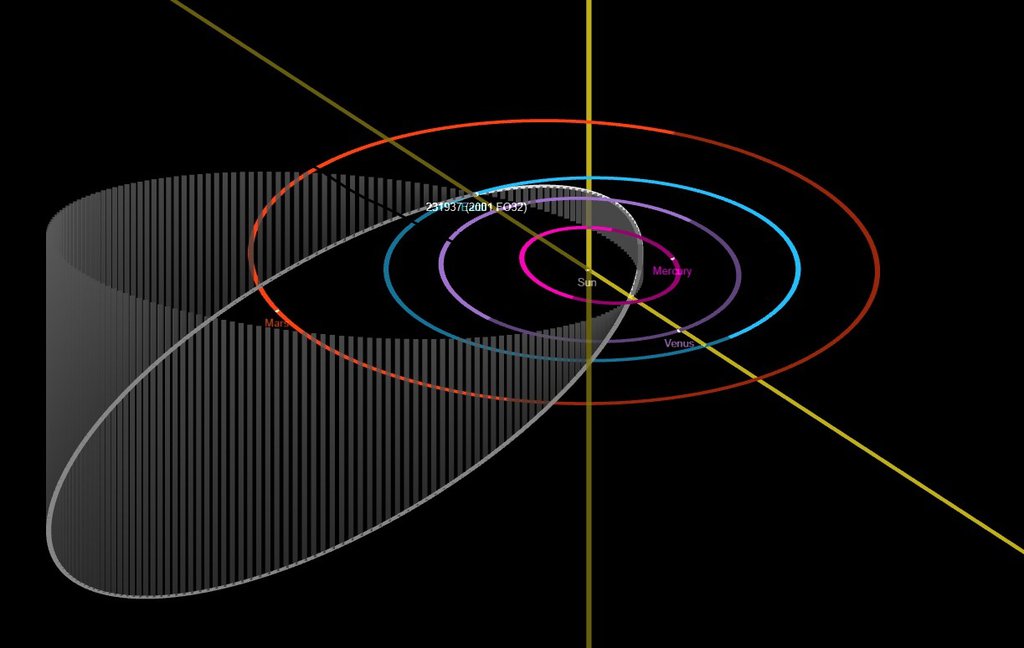 This diagram depicts the elongated and inclined orbit of 2001 FO32 as it travels around the Sun (white ellipse). Because of this orbit, when the asteroid makes its close approach to Earth, it will be traveling at an unusually fast speed of 77,000 mph (124,000 kph). Credit: NASA/JPL-Caltech Larger View

After its brief visit, 2001 FO32 will continue its lonely voyage, not coming this close to Earth again until 2052, when it will pass by at about seven lunar distances, or 1.75 million miles (2.8 million kilometers).

Asteroid 2001 FO32 was discovered in March 2001 by the Lincoln Near-Earth Asteroid Research (LINEAR) program in Socorro, New Mexico, and had been estimated, based on optical measurements, to be roughly 3,000 feet (1 kilometer) wide. In more recent follow-up observations by NEOWISE, 2001 FO32 appears to be faint when observed in infrared wavelengths, which suggests the object is likely less than 1 kilometer in diameter. Analysis by the NEOWISE team shows that it is between 1,300 to 2,230 feet (440 to 680 meters) wide.

The March 21 encounter will provide an opportunity for astronomers to get a more precise understanding of the asteroid’s size and albedo (i.e. how bright, or reflective, its surface is), and a rough idea of its composition.

This will be achieved, in part, with the use of NASA’s Infrared Telescope Facility (IRTF), a 3.2-meter (10.5-foot) telescope atop Hawaii’s Mauna Kea that will observe the asteroid in the days leading up to close approach using its workhorse infrared spectrograph, SpeX. “We’re trying to do geology with a telescope,” said Vishnu Reddy, associate professor at the University of Arizona’s Lunar and Planetary Laboratory in Tucson.

When sunlight hits an asteroid’s surface, minerals in the rock absorb some wavelengths while reflecting others. By studying the spectrum of light reflecting off the surface, astronomers can measure the chemical “fingerprints” of the minerals on the surface of the asteroid. “We’re going to use the IRTF to get the infrared spectrum to see its chemical makeup,” Reddy explained. “Once we know that, we can make comparisons with meteorites on Earth to find out what minerals 2001 FO32 contains.”

For example, should 2001 FO32 be identified as iron-rich, that would mean it’s denser and therefore more massive than a stony asteroid of a similar size; observations showing a surface with low albedo (meaning that it’s dark) may indicate the asteroid contains a lot of carbon, suggesting it could be the nucleus of a long-dead comet.

In addition, radar observations by the Deep Space Network (DSN) may be carried out to get a detailed view of the asteroid. An operation of NASA’s Space Communications and Navigation program (SCaN), the DSN comprises three ground stations – one in California (Goldstone), one in Spain (Madrid), and one in Australia (Canberra). Their dish antennas can be used to bounce radio signals off 2001 FO32 so that other radio antennas can receive them. Such radar observations can offer additional insight into the asteroid’s orbit, provide a better estimate of its dimensions and rotation rate, and help glimpse surface features (like large boulders or craters). They could even reveal any small satellites that may be in tow.

“Observations dating back 20 years revealed that about 15% of near-Earth asteroids comparable in size to 2001 FO32 have a small moon,” said Lance Benner, principal scientist at JPL. “Currently little is known about this object, so the very close encounter provides an outstanding opportunity to learn a great deal about this asteroid.”

Over 95% of near-Earth asteroids the size of 2001 FO32 or larger have been discovered, tracked, and cataloged. None of the large asteroids in the catalog has any chance of impacting Earth over the next century, and it is extremely unlikely that any of the remaining undiscovered asteroids of this size could impact Earth, either. Still, efforts continue to discover all asteroids that could pose an impact hazard. The more information that can be gathered about these objects, the better mission designers can prepare to deflect them if any were to threaten Earth in the future.

Meanwhile, amateur astronomers can gather information of their own about 2001 FO32. “The asteroid will be brightest while it moves through southern skies,” said JPL’s Chodas. “Amateur astronomers in the southern hemisphere and at low northern latitudes should be able to see this asteroid using moderate size telescopes with apertures of at least 8 inches in the nights leading up to closest approach, but they will probably need star charts to find it.”