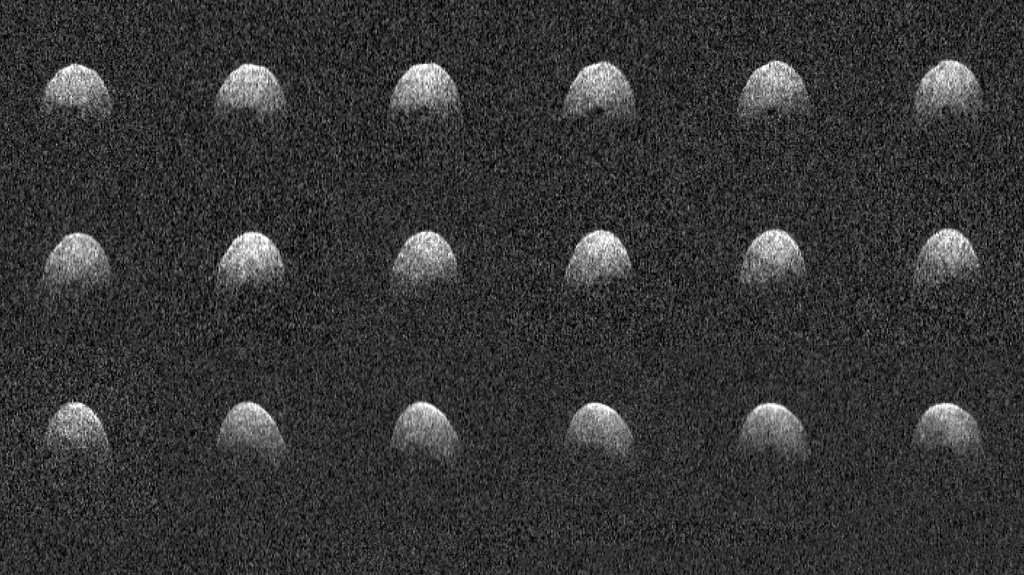 These radar images of near-Earth asteroid 3200 Phaethon were generated by astronomers at the National Science Foundation's Arecibo Observatory on Dec. 17, 2017. Observations of Phaethon were conducted at Arecibo from Dec.15 through 19, 2017. At time of closest approach on Dec. 16 at 3 p.m. PST (6 p.m. EST, 11 p.m. UTC) the asteroid was about 6.4 million miles (10.3 million kilometers) away, or about 27 times the distance from Earth to the moon. The encounter is the closest the asteroid will come to Earth until 2093.› Full image and caption
Credit: Arecibo Observatory/NASA/NSF

Updated Version as of 11 am PST: corrections include close approach distance and size comparison to asteroid Bennu.

After several months of downtime since Hurricane Maria struck the island of Puerto Rico, the Arecibo Observatory Planetary Radar has returned to normal operation, providing the highest-resolution images to date of near-Earth asteroid 3200 Phaethon during its December 2017 close approach to Earth. The radar images, which are subtle at the available resolution, reveal the asteroid is spheroidal (roughly ball-shaped) and has a large concavity, or depression, at least several hundred meters in extent near its equator, and a conspicuous dark, circular feature near one of the poles. Arecibo's radar images of Phaethon have resolutions as fine as about 250 feet (75 meters) per pixel.

"These new observations of Phaethon show it may be similar in shape to asteroid Bennu, the target of NASA's OSIRIS-REx spacecraft, but more than 1,000 Bennus could fit inside of Phaethon," said Patrick Taylor, a Universities Space Research Association (USRA), Columbia, Maryland, scientist and group leader for Planetary Radar at Arecibo Observatory. "The dark feature could be a crater or some other topographic depression that did not reflect the radar beam back to Earth."

Radar images obtained by Arecibo indicate Phaethon has a diameter of about 3.6 miles (6 kilometers) -- roughly 0.6 miles (1 kilometer) larger than previous estimates. Phaethon is the second largest near-Earth asteroid classified as "Potentially Hazardous." Near-Earth objects are classified as potentially hazardous asteroids (PHAs), based on their size and how closely they can approach Earth's orbit.

Tracking and characterizing PHAs is a primary mission of NASA's Planetary Defense Coordination Office. Radar is a powerful technique for studying asteroid sizes, shapes, rotation, surface features and roughness, and for more precise determination of their orbital path, when they pass relatively close to Earth.

"Arecibo is an important global asset, crucial for planetary defense work because of its unique capabilities," said Joan Schmelz of USRA and deputy director of Arecibo Observatory. "We have been working diligently to get it back up and running since Hurricane Maria devastated Puerto Rico."

The Arecibo Observatory has the most powerful astronomical radar system on Earth. On Sept. 20, the telescope suffered minor structural damage when Maria, the strongest hurricane to hit the island since 1928, made landfall. Some days after the storm, the observatory resumed radio astronomy observations, while also serving as a base for relief efforts to surrounding communities. Radar observations, which require high power and diesel fuel for generators at the site, resumed operations in early December after commercial power returned to the observatory and the generators could then be used exclusively for the radar.

Asteroid 3200 Phaethon was discovered on Oct. 11, 1983, by NASA's Infrared Astronomical Satellite (IRAS), and the planetary dust that produces the annual Geminid meteor shower originates from this asteroid. Observations of Phaethon were conducted at Arecibo from Dec. 15 through 19, 2017, using the NASA-funded planetary radar system. At time of closest approach on Dec. 16 at 3 p.m. PST (6 p.m. EST, 11 p.m. UTC) the asteroid was about 6.4 million miles (10.3 million kilometers) away, or about 27 times the distance from Earth to the moon. The encounter is the closest the asteroid will come to Earth until 2093, but it came a little closer in 1974 and about half this distance back in 1931 before its existence was known.