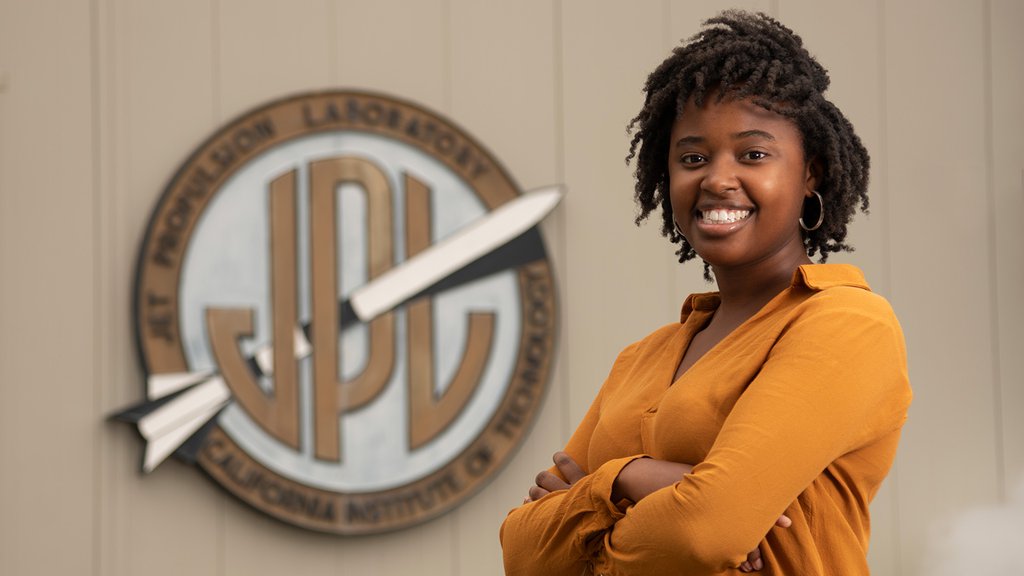 Janelle Wellons reveals how she fought an uphill battle against the pitfalls and stigmas of the "diverse" label - and found her true calling as a powerful new force at JPL.

In high school, Janelle Wellons excelled in her classes, especially math, and quickly climbed to the top of her class. By the spring of her senior year, she had an acceptance letter in hand from her dream school, the Massachusetts Institute of Technology. But while that should have been a joyous time, an incident with a high school classmate cast a long shadow.

"One of my classmates approached me in front of a group of friends and said, 'We all know the reason you got accepted into MIT is because you're black,'" Wellons recalled. "No one standing there said anything, and the fact that no one stood up for me spoke volumes."

Today, Wellons shows no hint of how close she came to giving up - not because of the sting of one comment that broke the surface, but because of the doubts and questions that worked invisibly during her formative years.

Bright-eyed with an ebullient personality and hearty laugh, she works as an engineer at NASA's Jet Propulsion Laboratory in Pasadena, California, where she operates the Lunar Reconnaissance Orbiter's Diviner instrument - a radiometer that measures the surface temperature of the Moon. Wellons is also developing the system that will command the Multi-Angle Imager for Aerosols instrument, which will launch around 2022 to study how Earth's pollutants affect people's health on a global scale.

Just three years out of college, she is one of the youngest staffers on a Moon mission and an Earth mission. But while her progress has been quick, it was not easy.

Wellons grew up in South Jersey, the eldest of two siblings. Her mother was a secretary at an oil and gas corporation, and her father worked in warehouses. When she was about 6 years old, she went with her mother on a bring-your-child-to-work day and spent the morning surrounded by engineers doing demonstrations for the kids.

"It opened my eyes to realize: an engineer makes things!" she said. "I got that into my mind."

But as she grew older, Wellons realized that reaching her goals would sometimes come alongside prejudice. The acceptance-letter incident wasn't her only brush with racism. Wellons felt racial tension throughout her high school years, especially since she was often one of the few black students in her advanced placement classes.

"It kind of defined me. It was like they couldn't see anything else," she says. "In high school, people joke about bad things all the time and they always say they were kidding to make it OK, but after a time, it gets to you," she says.

By her senior year, she recalled, "Something was just not right."

It wasn't feeling hurt that alarmed her. It was feeling nothing at all.

The spring of her senior year, Wellons received a call from the MIT Office of Engineering Outreach Programs with the news that she'd been awarded a scholarship.

"It should've been a very happy moment, but I didn't feel anything and just hung up the phone and sat outside by the lockers," she recalled. "When I realized I couldn't feel happy about that, I realized there was something really wrong with me.

"That's when the suicidal thoughts started to creep in, like, 'Why can't I have authentic reactions anymore?' I knew it was a serious problem."

Wellons' parents sought out a therapist to help her, and as she entered MIT, things dramatically improved. She joined a black student union, pledged a sorority and interacted with a multicultural community on campus.

"I definitely had a huge transformation in college," she says. "When you take away the 'smart black girl' label, you become your own person and people can have a conversation beyond that."

Still, her course load was demanding, and Wellons quickly realized she was, as she says, "in another realm of smart," finding herself sitting next to a gold medal winner of the International Math Olympiad and doubting why she was admitted to MIT. "But that was a good thing."

Although she thought she might major in mathematics, an aerospace engineering class changed her mind. The professor showed a photo of an astronaut fixing NASA's Hubble Space Telescope and revealed that he was the person in the photo. Wellons was in awe.

"The opportunity to be taught by an astronaut was something I could not pass up," she said. "I realized that's what I wanted to do - I'm going to learn about space from experts! I was blown away by that."

Another professor introduced her to the value of critical self-assessment during a capstone project involving an Antarctic penetrator probe. "He was a really tough professor who would angrily say, 'This would never pass a review in the industry,' and would heavily criticize our presentations," she recalled. "But my standards are much higher now because of him, and I'm just as nitpicky."

Wellons applies that work ethic around the clock at JPL. She's on call 24/7 for the Diviner instrument Reconnaissance Orbiter, sometimes getting calls at 2 a.m. and, on one rare occasion, had to rush to her laptop in the middle of a night out with friends.

"The one scary thing is, you are the engineer responsible for the instrument's success," she said. "You are the operator, and you can't afford to be sloppy in this job. Instruments don't sleep."

Wellons' typical day starts with checking on the health and safety of her instrument or, as she puts it, "making sure it's alive and well." Then she'll work with the science team and, depending on what they would like to look at, help figure out if their requests can be met without putting the instrument's well-being at risk.

"You're in charge of making sure the scientists don't push the limit," she explained. "If you get too greedy, you might break the instrument."

Then she creates the commands that will be sent to the instrument.

At JPL, Wellons balances gratitude for her career and awareness that being a black female engineer comes with challenges.

"I am so thankful to be here, because growing up, I rarely if ever saw someone who looks like me working at a company so incredibly amazing, making history every day," she said. "At the same time, that doesn't mean [there aren't] comments toward me. JPL is made up of individuals with their own thoughts and experiences and perspectives on life, so of course you're going to have instances. It's definitely not going to slow me down, though."

To help spread the message of inclusion, Wellons is on the board of JPL's African American Resource Team, which she's helping revitalize.

"It's about building a cultural community and encouraging other young people to come work here," she says.

While Wellons often has work on the brain, she also carves out time to give back.

Looking back on what she's been through, Wellons remains focused on positivity and making the most of her time at JPL - seeking out mentors, gaining a wide variety of experiences and setting her sights on making her voice and her vision heard.

"Being here a short time doesn't mean that you can't accomplish great things quickly," she said. But not easily, in her experience, and not without the right people on your side along the way.

"I am immensely thankful for the opportunities and support that have brought me to JPL, because it was never a straight shot," Wellons said. "Don't forget those who have supported you, believed in you, prayed for you, taught you and lifted you up when you felt especially down."