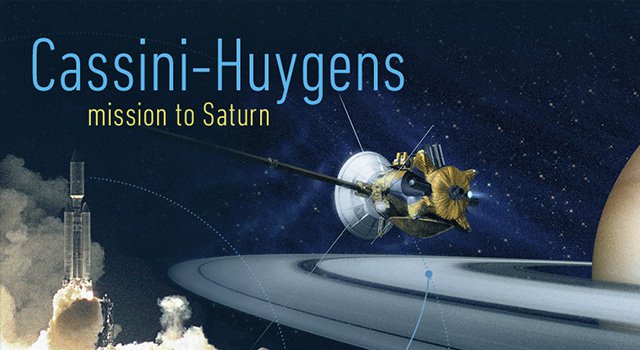 This illustrated timeline features milestones in the journey of NASA's Cassini spacecraft. Scroll up to launch Cassini's voyage.
Credit: NASA/JPL-Caltech 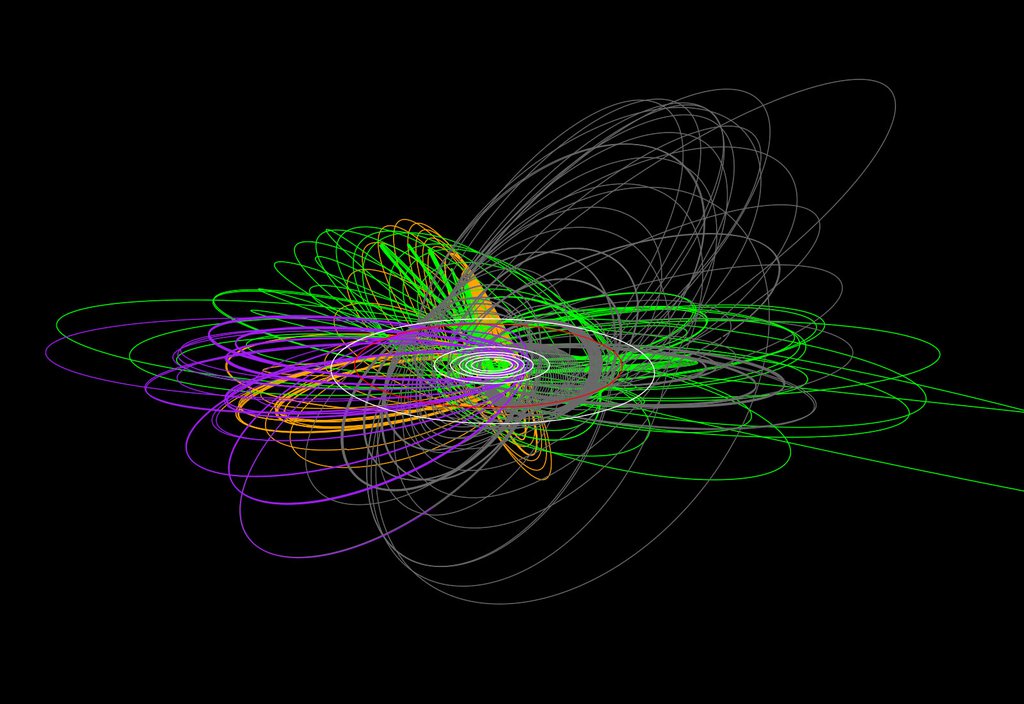 NASA's Cassini spacecraft has been on an epicroad trip, as this graphic of its orbits around the Saturn system shows. This picture traces Cassini's orbits from Saturn orbit insertion, on June 30, 2004 PDT, through the planned end of the mission, on Sept. 15, 2017. Saturn is in the center, with the orbit of its largest moon Titan in red and the orbits of its six other inner satellites in white.
Credit: NASA/JPL-Caltech

It's been 3.8 billion miles and a trunk full of memories for NASA's Cassini spacecraft, launched 15 years ago today.

Since launching on Oct. 15, 1997, the spacecraft has logged more than 3.8 billion miles (6.1 billion kilometers) of exploration - enough to circle Earth more than 152,000 times. After flying by Venus twice, Earth, and then Jupiter on its way to Saturn, Cassini pulled into orbit around the ringed planet in 2004 and has been spending its last eight years weaving around Saturn, its glittering rings and intriguing moons.

And, lest it be accused of refusing to write home, Cassini has sent back some 444 gigabytes of scientific data so far, including more than 300,000 images. More than 2,500 reports have been published in scientific journals based on Cassini data, describing the discovery of the plume of water ice and organic particles spewing from the moon Enceladus; the first views of the hydrocarbon-filled lakes of Saturn's largest moon Titan; the atmospheric upheaval from a rare, monstrous storm on Saturn and many other curious phenomena.

"As Cassini conducts the most in-depth survey of a giant planet to date, the spacecraft has been flying the most complex gravity-assisted trajectory ever attempted," said Robert Mitchell, Cassini program manager at NASA's Jet Propulsion Laboratory in Pasadena, Calif. "Each flyby of Titan, for example, is like threading the eye of the needle. And we've done it 87 times so far, with accuracies generally within about one mile [1.6 kilometers], and all controlled from Earth about one billion miles [1.5 billion kilometers] away."

The complexity comes in part from the spacecraft lining up visits to more than a dozen of Saturn's 60-plus moons and sometimes swinging up to get views of poles of the planet and moons. Cassini then works its way back to orbiting around Saturn's equator, while staying on track to hit its next targeted flyby. The turn-by-turn directions that mission planners write also have to factor in the gravitational influences of the moons and a limited fuel supply.

"I'm proud to say Cassini has accomplished all of this every year on-budget, with relatively few health issues," Mitchell said. "Cassini is entering middle age, with the associated signs of the passage of years, but it's doing remarkably well and doesn't require any major surgery."

The smooth, white paint of the high-gain antenna probably now feels rough to the touch, and some of the blankets around the body of the spacecraft are probably pitted with tiny holes from micrometeoroids. But Cassini still retains redundancy on its critical engineering systems, and the team expects it to return millions more bytes of scientific data as it continues to sniff, taste, watch and listen to the Saturn system.

And that's a good thing, because Cassini still has a daring, unique mission ahead of it. Spring has only recently begun to creep over the northern hemisphere of Saturn and its moons, so scientists are only beginning to understand the change wrought by the turning of the seasons. No other spacecraft has been able to observe such a transformation at a giant planet.

Starting in November 2016, Cassini will begin a series of orbits that wind it ever closer to Saturn. Those orbits kick off just outside Saturn's F ring, the outermost of the main rings. Then in April 2017, one final close encounter with Titan will put Cassini on a trajectory that will pass by Saturn inside its innermost ring, a whisper away from the top of Saturn's atmosphere. After 22 such close passes, the gravitational perturbation from one final distant Titan encounter will bring Cassini ever closer. On Sept. 15, 2017, after entry into Saturn's atmosphere, the spacecraft will be crushed and vaporized by the pressure and temperature of Saturn's final embrace to protect worlds like Enceladus and Titan, with liquid water oceans under their icy crusts that might harbor conditions for life.

"Cassini has many more miles to go before it sleeps, and many more questions that we scientists want answered," said Linda Spilker, Cassini project scientist at JPL. "In fact, its last orbits may be the most thrilling of all, because we'll be able to find out what it's like close in to the planet, with data that cannot be gathered any other way."

A new illustrated timeline of Cassin's 15 years of exploration is available at: http://saturn.jpl.nasa.gov/photos/imagedetails/index.cfm?imageId=4646.

The Cassini-Huygens mission is a cooperative project of NASA, ESA and the Italian Space Agency. JPL manages the mission for NASA's Science Mission Directorate in Washington. The Cassini orbiter and its two onboard cameras were designed, developed and assembled at JPL. JPL is managed for NASA by the California Institute of Technology in Pasadena. For more information about the mission, visit: http://www.nasa.gov/cassini and http://saturn.jpl.nasa.gov .