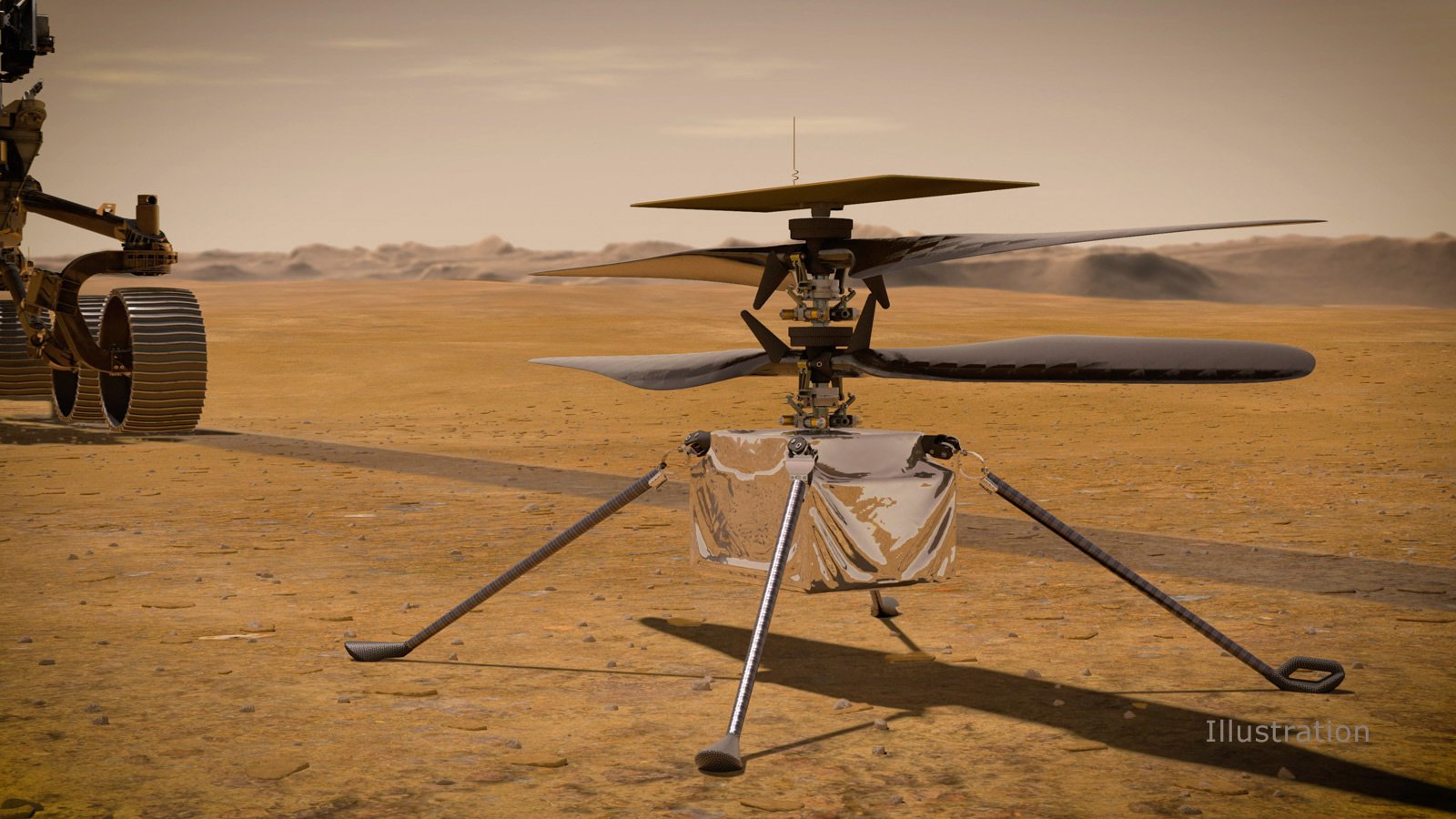 The Ingenuity Mars Helicopter is a small, autonomous aircraft. It was sent to Mars to perform experimental flight tests to determine if powered, controlled flight at the Red Planet was possible.

The Ingenuity Mars Helicopter is a small aircraft carried to the surface of the Red Planet attached to the belly of the Perseverance rover. Ingenuity’s mission is experimental in nature and completely independent of the rover’s science mission.

Ingenuity was deployed to the surface on April 4, 2021. On April 19, it became the first aircraft in history to make a powered, controlled flight on another planet. Flight at Mars is challenging because the Red Planet has a significantly lower gravity – one-third that of Earth’s – and an extremely thin atmosphere with only 1% the pressure at the surface compared to our planet. This means there are relatively few air molecules with which Ingenuity’s two 4-foot-wide (1.2-meter-wide) rotor blades can interact to achieve flight.

The rotorcraft’s flights are autonomous – piloted by onboard guidance, navigation, and control systems running algorithms developed by the team at JPL. Because data must be sent to and returned from the Red Planet over millions of miles using orbiting satellites and NASA’s Deep Space Network, Ingenuity cannot be flown with a joystick, and its flights are not observable from Earth in real time.

To operate at Mars, the rotorcraft requires the Perseverance rover to assist in communications back and forth from Earth.

After its fifth test flight (May 7, 2021), the Ingenuity experiment embarked on a new operations demonstration phase, exploring how aerial scouting and other functions could benefit future exploration of Mars and other worlds. The data from these flights is also being used to help inform decisions relating to considering small helicopters for the role as full standalone science craft carrying instrument payloads. In the distant future, Mars helicopters might even help astronauts explore the Red Planet.

In addition, the rotorcraft’s imagery is being used to directly support the Perseverance rover’s exploration of Jezero Crater. The science team is finding pictures from an aerial perspective beneficial helping assess what geologic features and locations are worthy of exploration, and rover planners are using the same to map out safe routes to get there.

Ingenuity arrived at the Red Planet on February 18, 2021, stowed aboard the Mars Perseverance Rover.

The small rotorcraft made history, hovering above Jezero Crater, demonstrating that powered, controlled flight on another planet is possible.
Learn more

On its third flight, Ingenuity flew speeds and distances beyond what had ever been previously demonstrated, even in testing on Earth. The helicopter flew 164 feet (50 meters), just over half the length of a football field, reaching a top speed of 6.6 feet per second (2 meters per second).
Learn more

Operations demonstration phase begins, exploring how aerial scouting and other functions could benefit future exploration of Mars and other worlds.
Learn more