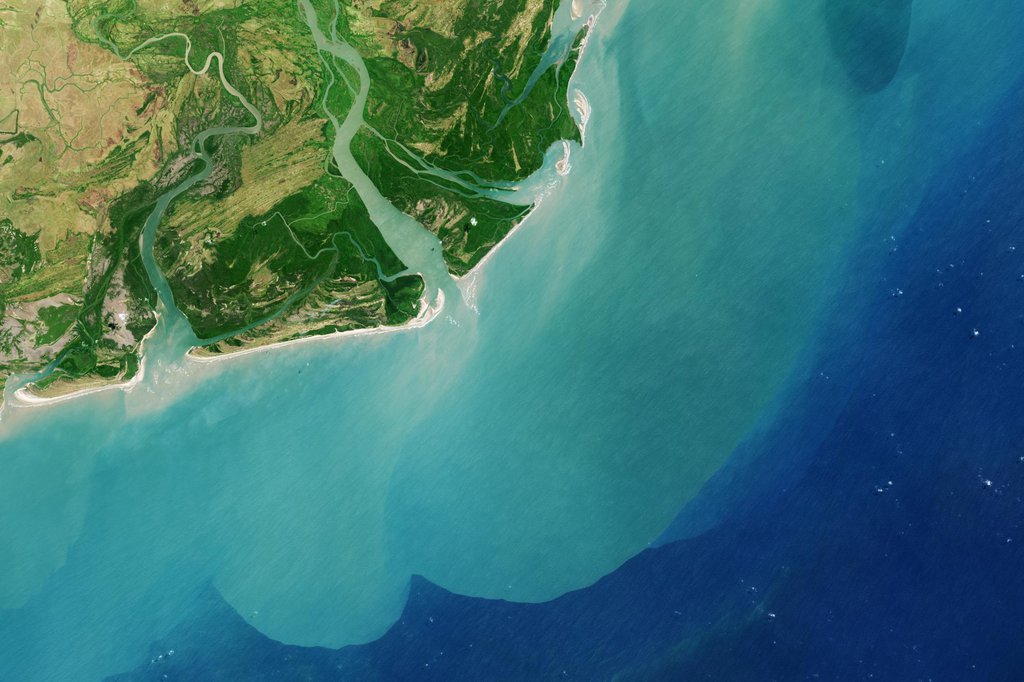 It drains a watershed that spans eight countries and nearly 1.6 million square kilometers (600,000 square miles). The Zambezi (also Zambeze) is the fourth largest river in Africa, and the largest east-flowing waterway. From headwaters in Zambia, it rolls across 2,574 kilometers (1,599 miles) of the south-central African plateau before pouring water and sediment into the Indian Ocean through a vast delta in Mozambique.

The Operational Land Imager on the Landsat 8 satellite acquired this natural-color image of the Zambezi Delta on August 29, 2013. Sandbars and barrier spits stretch across the mouths of the delta, and suspended sediment extends tens of kilometers out into the sea. The sandy outflow turns the coastal waters to a milky blue-green compared to the deep blue of open water in the Indian Ocean.

The Zambezi Delta includes 230 kilometers of coastline fronting 18,000 square kilometers (7,00 square miles) of swamps, floodplains, and even savannahs (inland). The area has long been prized by subsistence fishermen and farmers, who find fertile ground for crops like sugar and fertile waters for prawns and fish. Two species of endangered cranes and one of the largest concentration of buffalo in Africa -- among many other species of wildlife -- have found a haven in this internationally recognized wetland.

However, the past six decades have brought great changes to the Zambezi Delta, which used to pour more water and sediment off of the continent. Hydropower dams upstream-most prominently, the Kariba and the Cahora Bassa-greatly reduce river flows during the wet season; they also trap sediments that would otherwise flow downstream. The result has been less water reaching the delta and the floodplains, which rely on pulses of nutrients and sediments from annual (and mostly benign) natural flooding.

The change in the flow of the river affects freshwater availability and quality in the delta. Strong flows push fresh water further out into the sea and naturally keep most of a delta full of fresh (or mostly fresh) water. When that fresh flow eases, the wetlands become drier and more prone to fire. Salt water from the Indian Ocean also can penetrate further into the marsh, upsetting the ecological balance for aquatic plant and animal species. Researchers have found that the freshwater table in the delta has dropped as much as five meters in the 50 years since dams were placed on the river.

Less river flow also affects the shape and extent of the delta. Today there is less sediment replenishing the marshes and beaches as they are scoured by ocean waves and tides. "What strikes me in this image is the suspended sediment offshore," said Liviu Giosan, a delta geologist at the Woods Hole Oceanographic Institution. "Sediment appears to be transferred from the delta offshore in plumes that not only originate in active river mouths but also from deactivated former mouths, now tidal channels. This shows the power of tidal scouring contributing to the slow but relentless erosion of the delta."