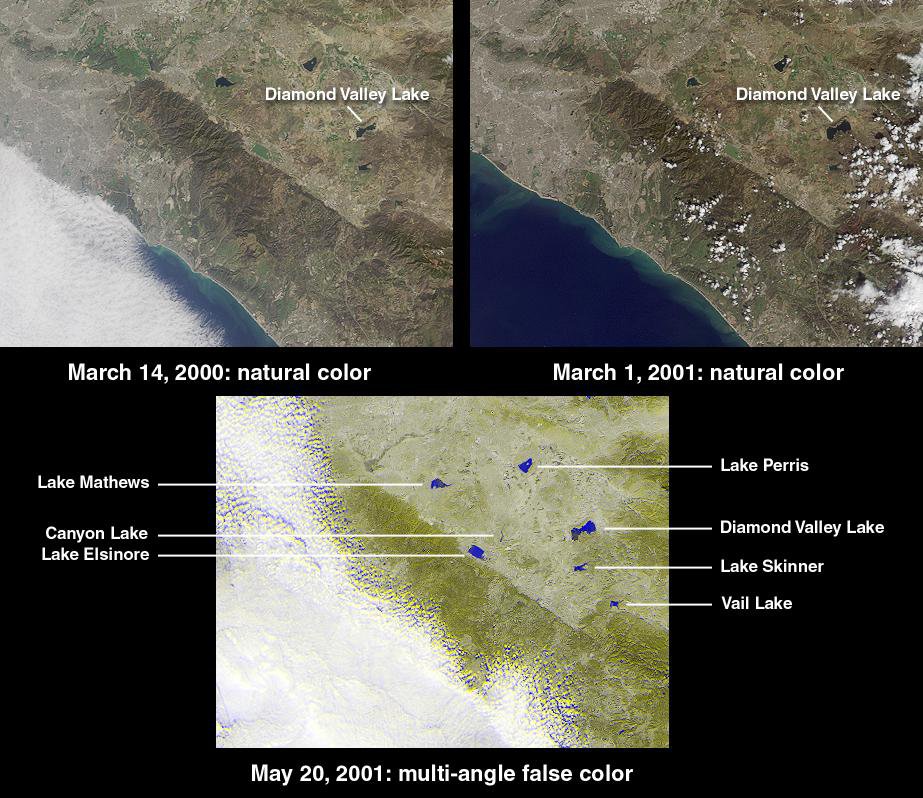 The new Diamond Valley Lake Reservoir near the city of Hemet in Riverside County is billed as the largest earthworks construction project in U.S.history. Construction began in 1995 and involved 31 million cubic meters of foundation excavation and 84 million cubic meters of embankment construction. This set of MISR images captures the most recent phase in the reservoir's activation. At the upper left is a natural-color view acquired by the instrument's vertical-viewing (nadir) camera on March 14, 2000 (Terra orbit 1273), shortly after the Metropolitan Water District began filling the reservoir with water from the Colorado River and Northern California. Water appears darker than the surrounding land. The image at the upper right was acquired nearly one year later on March 1, 2001 (Terra orbit 6399), and shows a clear increase in the reservoir's water content. When full, the lake will hold nearly a trillion liters of water.

According to the Metropolitan Water District, the 7 kilometer x 3 kilometer reservoir nearly doubles Southern California's above-groundwater storage capacity. In addition to routine water management, Diamond Valley Lake is designed to provide protection against drought and a six-month emergency supply in the event of earthquake damage to a major aqueduct. In the face of electrical power shortages, it is also expected to reduce dependence on the pumping of water from northern mountains during the high-demand summer months. An unexpected result of site excavation was the uncovering of mastodon and mammoth skeletons along with bones from extinct species not previously thought to have been indigenous to the area, such as the giant long-horned bison and North American lion. A museum and interpretive center is being built to protect these finds.

The lower MISR image, from May 20, 2001 (Terra orbit 7564), is a false-color view combining data from the instrument's 26-degree forward view (displayed as blue) with data from the 26-degree backward view (displayed as yellow). This technique enables bodies of water to standout prominently by taking advantage of the strong change in brightness between the two view angles and the contrasting angular signature of the surrounding land. The blue-yellow separation in the cloud field is due to geometric parallax resulting from the clouds' elevation above the surface terrain.