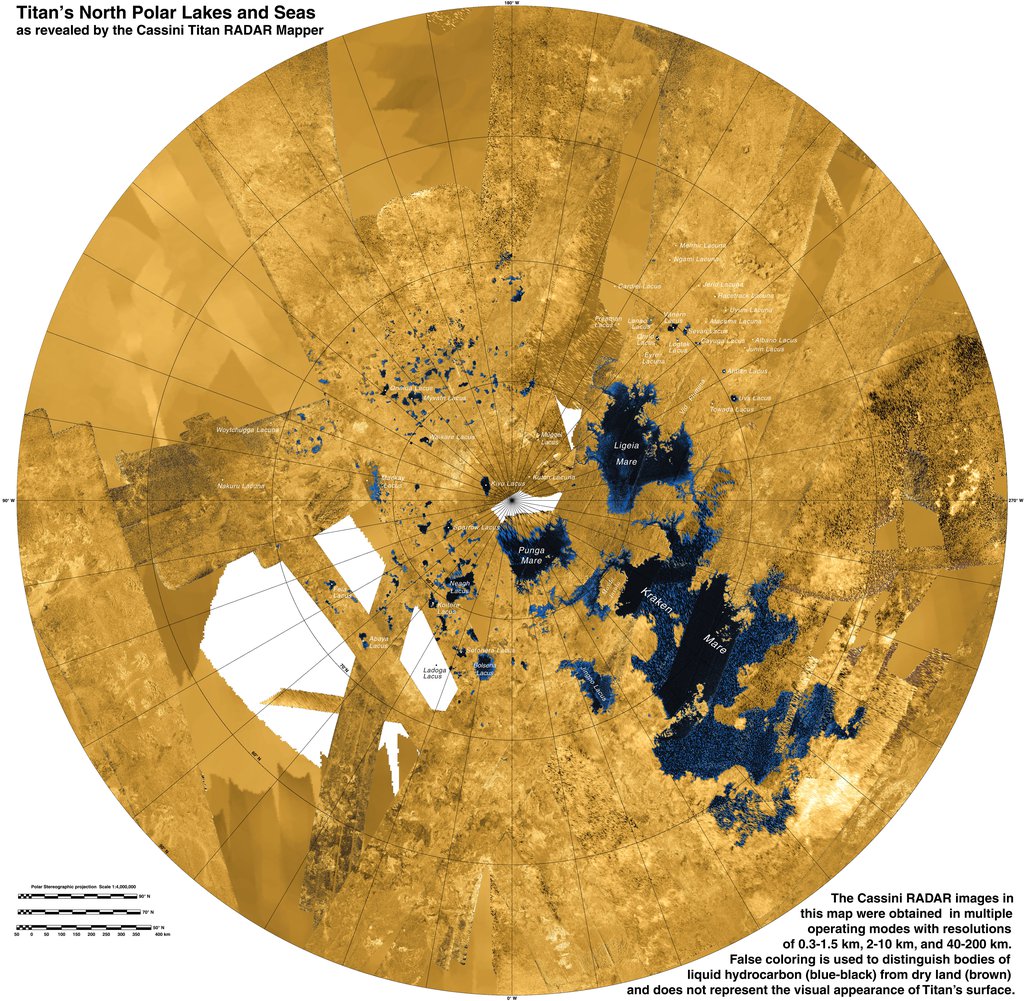 Click on an individual image for larger versions
This colorized mosaic from NASA's Cassini mission shows the most complete view yet of Titan's northern land of lakes and seas. Saturn's moon Titan is the only world in our solar system other than Earth that has stable liquid on its surface. The liquid in Titan's lakes and seas is mostly methane and ethane.

Seas and major lakes are labeled in the annotated version. The data were obtained by Cassini's radar instrument from 2004 to 2013. In this projection, the north pole is at the center. The view extends down to 50 degrees north latitude. In this color scheme, liquids appear blue and black depending on the way the radar bounced off the surface. Land areas appear yellow to white.

The area above and to the left of the north pole is dotted with smaller lakes. Lakes in this area are about 30 miles (50 kilometers) across or less.

Most of the bodies of liquid on Titan occur in the northern hemisphere. In fact nearly all the lakes and seas on Titan fall into a box covering about 600 by 1,100 miles (900 by 1,800 kilometers). Only 3 percent of the liquid at Titan falls outside of this area.

Scientists are trying to identify the geologic processes that are creating large depressions capable of holding major seas in this limited area. A prime suspect is regional extension of the crust, which on Earth leads to the formation of faults creating alternating basins and roughly parallel mountain ranges. This process has shaped the Basin and Range province of the western United States, and during the period of cooler climate 13,000 years ago much of the present state of Nevada was flooded with Lake Lahontan, which (though smaller) bears a strong resemblance to the region of closely packed seas on Titan.

An unannotated version and a version with explanatory text are also available in Figures 1 and 2.

Photojournal note: Some of the full-resolution images provided here may be too large for some web browsers to handle. Users may right-click on the links to download the files to their desktop.