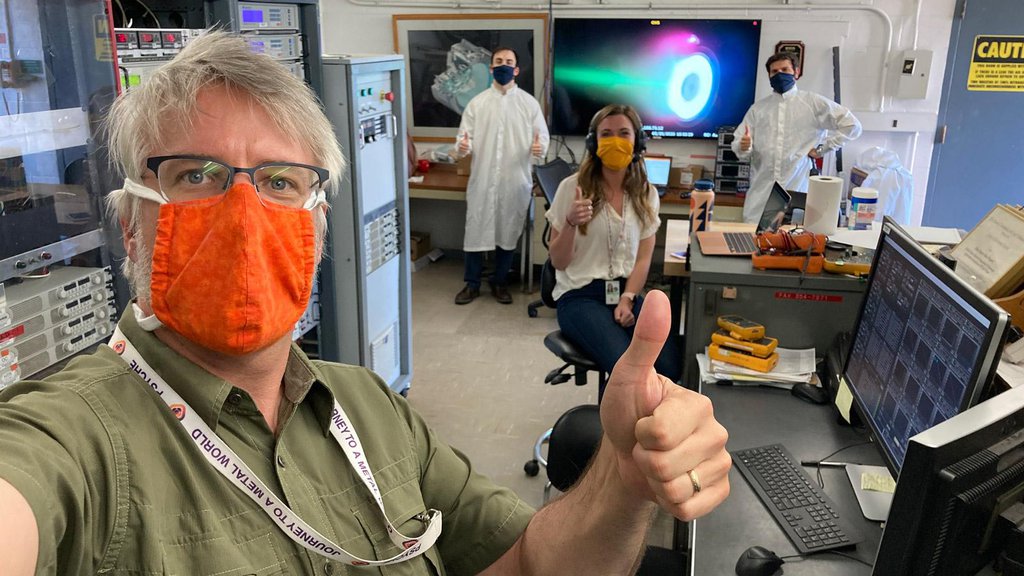 Psyche engineers adapted to COVID-19 social distancing and masking requirements while testing the Hall thrusters that will propel NASA's Psyche spacecraft on its journey to the main asteroid belt between Mars and Jupiter. Set to launch in August 2022, the spacecraft will utilize this super-efficient electric propulsion system to travel to the asteroid Psyche.

On May 20, 2020, at NASA's Jet Propulsion Laboratory, Flight System Engineer Steve Snyder (foreground) of JPL and a crew of engineers from Maxar Technologies worked together in the control room next to the vacuum chamber where the thruster was fired up. Snyder and his Maxar colleagues (from left: Faraz Aghazadeh, Taylor Kerl and Giovanni Lenguito) put the thruster and its power supply through a series of stress tests to ensure they can operate together in the extreme conditions of deep space.

In the background, a monitor projects the image of the thruster firing. The thruster works by turning xenon gas, a neutral gas used in car headlights and plasma TVs, into xenon ions. As the xenon ions are accelerated out of the thruster, they create the thrust that will propel the spacecraft. The xenon plasma emits a blue glow, seen here on the screen, as it operates. Hall thrusters will be used for the first time beyond lunar orbit, demonstrating that they could play a role in supporting future missions to deep space.

Maxar and JPL adapted the Hall thruster system for use with the main body of the spacecraft that Maxar is building at its facility in Palo Alto, California.