The 'Xanadu Annex' on Titan (Denoised) 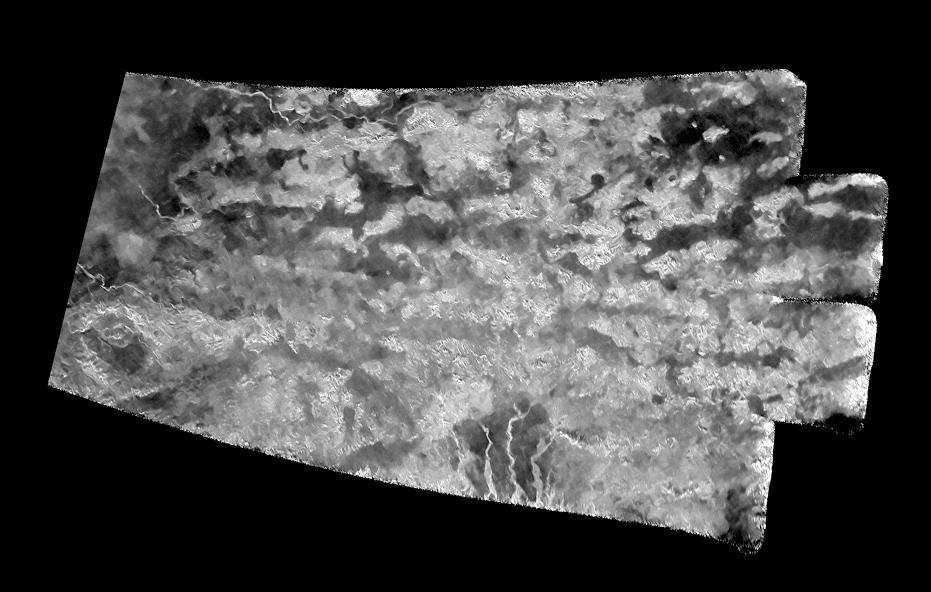 This synthetic-aperture radar (SAR) image was obtained by NASA's Cassini spacecraft on July 25, 2016, during its 'T-121' pass over Titan's southern latitudes. This view was produced using the same radar data as PIA20712, but the radar data have been treated with a technique for handling noise that can result in clearer, easier to interpret views.

The improved contrast provided by the denoising algorithm helps river channels (at bottom and upper left) stand out, as well as the crater-like feature at left.

The image shows an area nicknamed the "Xanadu annex" by members of the Cassini radar team, earlier in the mission. This area had not been imaged by Cassini's radar until now, but measurements of its brightness temperature from Cassini's microwave radiometer were quite similar to that of the large region on Titan named Xanadu (see PIA20713).

Cassini's radiometer is essentially a very sensitive thermometer, and brightness temperature is a measure of the intensity of microwave radiation received from a feature by the instrument.

Radar team members predicted at the time that, if this area were ever imaged, it would be similar in appearance to Xanadu, which lies just to the north. That earlier hunch appears to have been borne out, as features in this scene bear a strong similarity to the mountainous terrains Cassini's radar has imaged in Xanadu (see PIA08449).

Xanadu -- and now perhaps its annex -- remains something of a mystery. First imaged in 1994 by the Hubble Space Telescope (just three years before Cassini's launch from Earth), Xanadu was the first surface feature to be recognized on Titan. Once thought to be a raised plateau, the region is now understood to be slightly tilted, but not higher than, the darker surrounding regions. It blocks the formation of sand dunes, which otherwise extend all the way around Titan at its equator.

The image was taken by the Cassini Synthetic Aperture radar (SAR) on July 25, 2016 during the mission's 122nd targeted Titan encounter. The image has been modified by the denoising method described in A. Lucas, JGR:Planets (2014).

The Cassini-Huygens mission is a cooperative project of NASA, ESA (the European Space Agency) and the Italian Space Agency. NASA's Jet Propulsion Laboratory, a division of the California Institute of Technology in Pasadena, manages the mission for NASA's Science Mission Directorate, Washington. The Cassini orbiter was designed, developed and assembled at JPL. The radar instrument was built by JPL and the Italian Space Agency, working with team members from the United States and several European countries.