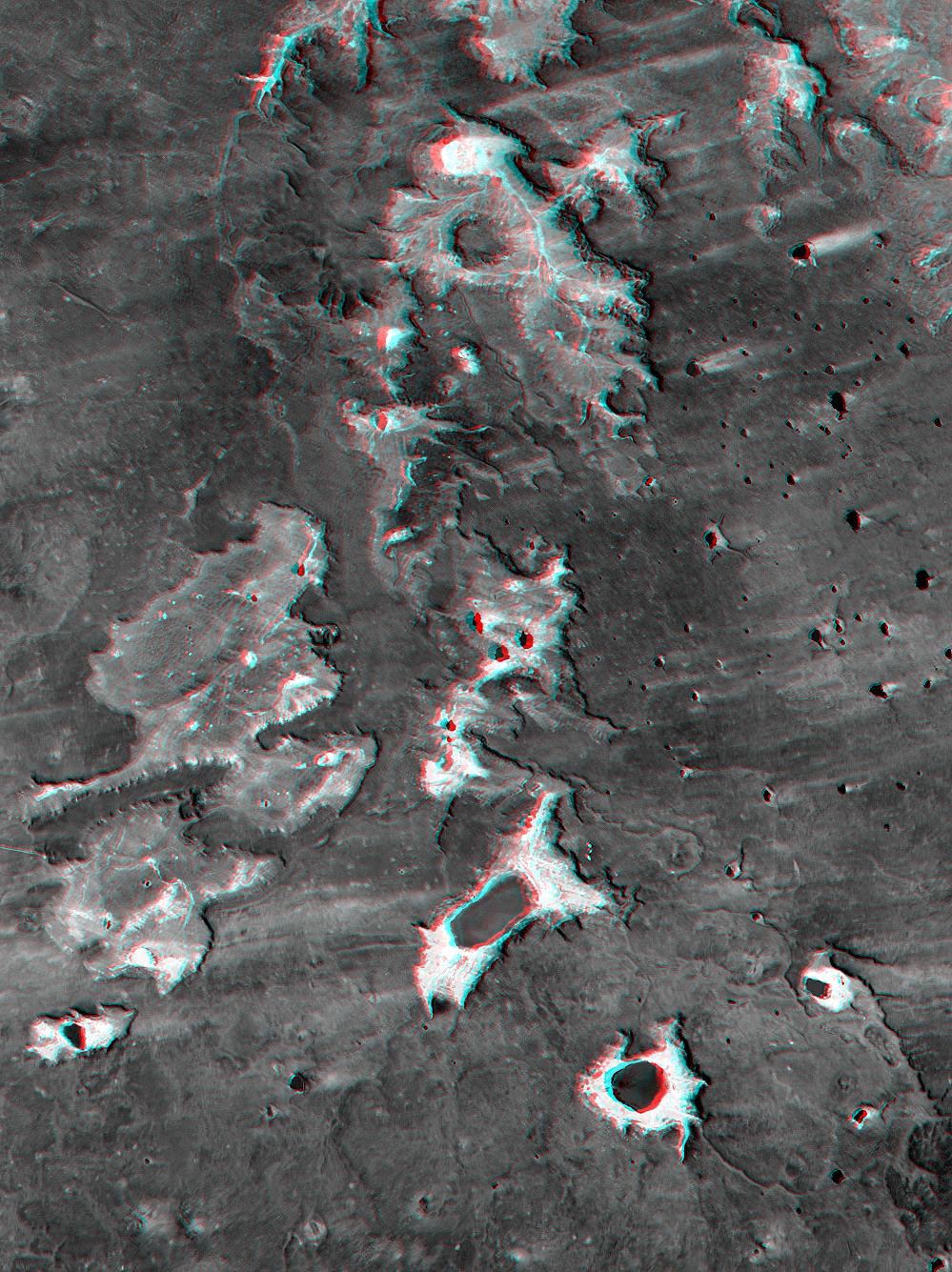 The Meseta de Somuncura is a semi-arid basalt plateau in northern Patagonia. This view of the northwestern part of the plateau, near Los Menucos, Argentina, shows numerous depressions where the upper basalt layers are missing or collapsed. Collapse occurs above voids in the underlying rock. These voids might have been caused by lava tubes carrying away molten lava from under the cooled and solidified surface of a lava flow. Alternatively, voids might result when ground water dissolves carbonate (limestone) or evaporite (salt) deposits that the lava may be covering.

Many of the depressions have salty lakes. Light wind streaks downwind (eastward) from the lakes show that salt crystals blow off the lake beds during dry times. Some eroded sand and silt debris from the basalt must also blow downwind, but the degree to which wind plays a role in the erosion of the depressions is not clear.

This anaglyph was generated by first draping a Landsat Thematic Mapper image over a topographic map from the Shuttle Radar Topography Mission, then producing the two differing perspectives, one for each eye. When viewed through special glasses, the result is a vertically exaggerated view of the Earth's surface in its full three dimensions. Anaglyph glasses cover the left eye with a red filter and the right eye with a blue filter.

Elevation data used in this image was acquired by the Shuttle Radar Topography Mission (SRTM) aboard the Space Shuttle Endeavour, launched on February 11, 2000. SRTM used the same radar instrument that comprised the Spaceborne Imaging Radar-C/X-Band Synthetic Aperture Radar (SIR-C/X-SAR) that flew twice on the Space Shuttle Endeavour in 1994. SRTM was designed to collect three-dimensional measurements of the Earth's surface. To collect the 3-D data, engineers added a 60-meter-long (200-foot) mast, installed additional C-band and X-band antennas, and improved tracking and navigation devices. The mission is a cooperative project between the National Aeronautics and Space Administration (NASA), the National Imagery and Mapping Agency (NIMA) of the U.S. Department of Defense (DoD), and the German and Italian space agencies. It is managed by NASA's Jet Propulsion Laboratory, Pasadena, CA, for NASA's Earth Science Enterprise,Washington, DC.