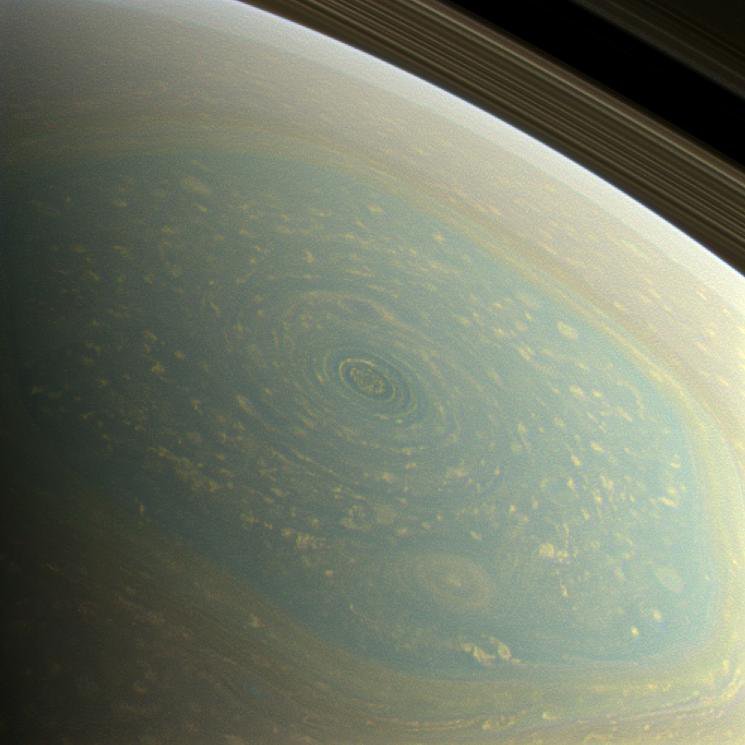 The north pole of Saturn, in the fresh light of spring, is revealed in this color image from NASA's Cassini spacecraft. The north pole was previously hidden from the gaze of Cassini's imaging cameras because it was winter in the northern hemisphere when the spacecraft arrived at the Saturn system in 2004.

A hurricane-like storm circling Saturn's north pole at about 89 degrees north latitude is inside the famous "hexagon" feature, which scientists think is a wandering jet stream that whips around the north pole at about 220 miles per hour (98 meters per second). It folds into a six-sided shape because the hexagon is a stationary wave that guides the path of the gas in the jet. The hexagon borders occur at about 77 degrees north latitude and the feature is wider than two Earths. Saturn's rings can be seen at the upper right of the image.

Images with red, green and blue spectral filters were combined to create this natural-color view, which is what the human eye would see if we were there at Saturn. The image here was acquired with the Cassini spacecraft wide-angle camera on Nov. 27, 2012 at a distance of approximately 260,000 miles (418,000 kilometers) from Saturn and at a sun-Saturn-spacecraft, or phase, angle of 96 degrees. Image scale is 18 miles (28.6 kilometers) per pixel.

A false-color version of this image can be seen at PIA14946.