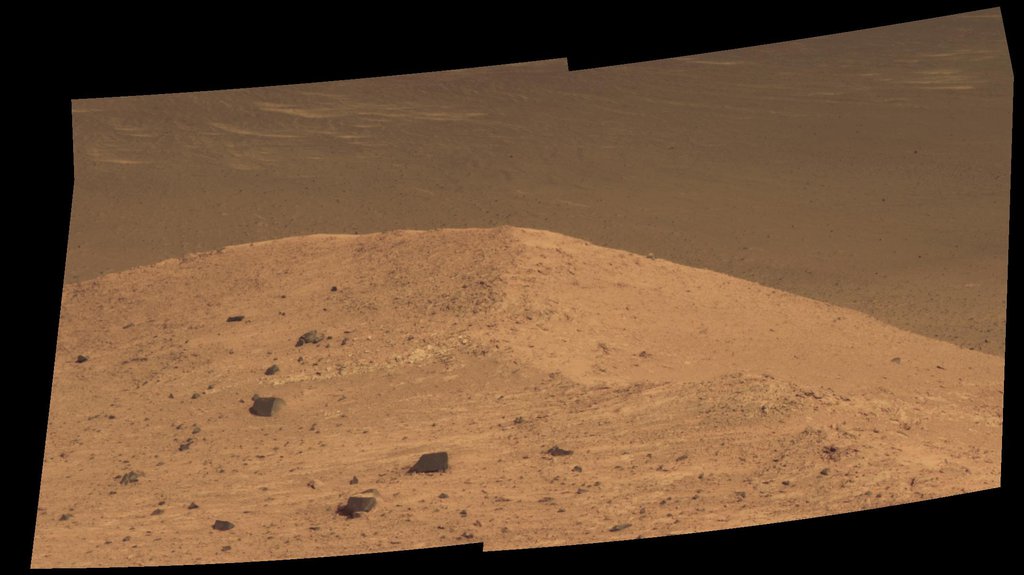 This scene from the panoramic camera (Pancam) on NASA's Mars Exploration Rover Opportunity shows "Spirit Mound" overlooking the floor of Endeavour Crater. The mound stands near the eastern end of "Bitterroot Valley" on the western rim of the crater, and this view faces eastward.

For scale, the two rocks at lower center are each about 8 inches (about 20 centimeters) across. At the mound's crest line, the image covers an area about 28 feet (about 8.5 meters) wide.

The component images for this mosaic were taken on Sept. 21, 2016, during the 4,501st Martian day, or sol, of Opportunity's work on Mars. Exposures were taken through three of the Pancam's color filters, centered on wavelengths of 753 nanometers (near-infrared), 535 nanometers (green) and 432 nanometers (violet). The scene is presented here in approximately true color.

The informal name the rover's science team chose for this feature refers to Spirit Mound in South Dakota. The team is using names of sites visited by the Lewis and Clark Expedition as informal names for features in Mars' Bitterroot Valley (named for a valley that the expedition visited in Montana).