Shadow Between the Shepherds 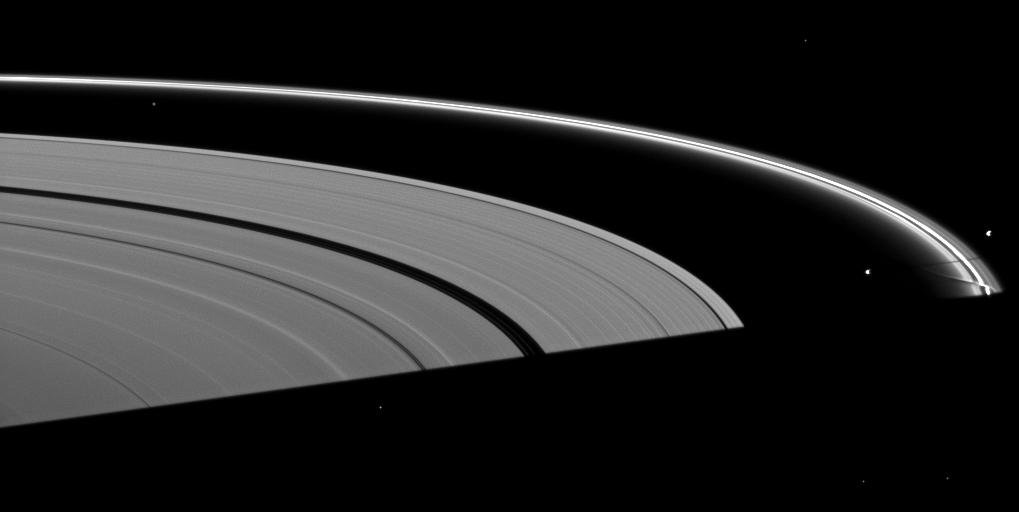 Saturn's moon Prometheus casts a shadow near a streamer-channel created by the moon in the thin F ring in this image taken about a month after the planet's August 2009 equinox.

Pandora (81 kilometers, or 50 miles across) can also be seen on the right of the image. Pandora orbits outside the F ring and, with the inner shepherd moon Prometheus, helps to keep the narrow lanes of the F ring in check. The gravity of potato-shaped Prometheus (86 kilometers, or 53 miles across) periodically creates streamer-channels in the F ring, and the moon's handiwork can be seen below the shadow in this image. To learn more and to watch a movie of this process, see PIA08397.

The shadow of the planet cuts across the bottom of the image.

Bright specks in the image are background stars.

The novel illumination geometry that accompanies equinox lowers the sun's angle to the ringplane, significantly darkens the rings, and causes out-of-plane structures to look anomalously bright and cast shadows across the rings. These scenes are possible only during the few months before and after Saturn's equinox, which occurs only once in about 15 Earth years. Before and after equinox, Cassini's cameras have spotted not only the predictable shadows of some of Saturn's moons (see PIA11657), but also the shadows of newly revealed vertical structures in the rings themselves (see PIA11665).

This view looks toward the sunlit, northern side of the rings from about 6 degrees above the ringplane.

The image was taken in visible light with the Cassini spacecraft narrow-angle camera on Sept. 13, 2009. The view was obtained at a distance of approximately 2.6 million kilometers (1.6 million miles) from Saturn and at a Sun-Saturn-spacecraft, or phase, angle of 117 degrees. Image scale is 15 kilometers (9 miles) per pixel.