Rings of Uranus at 1.44 kilometers 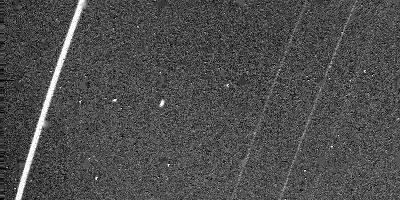 The outer rings of Uranus are visible in this Voyager 2 image, obtained Jan. 23, 1986, from a distance of 1.44 million kilometers (890,000 miles). The outermost and brightest ring, called epsilon, is visible along with the fainter and narrower delta and gamma rings (from left). This clear-filter, 15-second exposure was shuttered by Voyager's narrow-angle camera. The resolution of this image is about 15 km (9 mi). The epsilon ring is resolved into two bright components separated by a darker lane of material. Voyager scientists believe this is caused by a thinning of the ring material away from the edges of the ring. This image was part of a sequence of pictures designed to search for moons orbiting within the rings and responsible for their narrow appearance. One of two such "shepherd" moons discovered by Voyager -- found Jan. 20 and designated 1986U7 -- is visible as the elongated bright feature midway between the epsilon and delta rings. The moon appears elongated because its orbital motion smeared its image during the long exposure. The Voyager project is managed for NASA by the Jet Propulsion Laboratory.